In this article, course contributor Wendy Lennon, a Fellow of the English Association and founder of Shakespeare, Race & Pedagogy, gives us an insight into the scholarship of ‘race’ in Shakespeare’s plays. 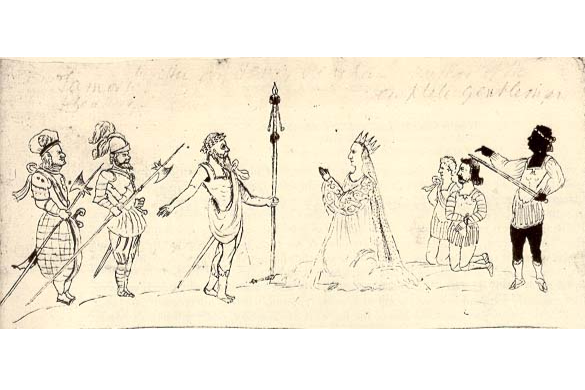 In this article, course contributor Wendy Lennon, a Fellow of the English Association and founder of Shakespeare, Race & Pedagogy, gives us an insight into the scholarship of ‘race’ in Shakespeare’s plays.

The title of Shakespeare’s 1604 play, Othello the Moor of Venice, alerts us to the possibility, contestability and instability of terms relating to ‘race’. As Ambereen Dadabhoy has recently observed: ‘contained within the word ‘Moor’ is a geographic distinction, religious differentiation and colour consciousness’.

Therefore, the title and language contained within the play, demonstrates the playwright’s awareness of Othello’s significant and fragile socially constructed difference. Furthermore, the term ‘race’ itself is not a category but a social construct. Shakespeare’s decision to take Cinthio’s tale of a Venetian Moor creatively expresses ways in which race is crafted and constructed to create racial tension and injustice.

Dishonest Iago’s complaint that Desdemona, the White daughter of a Venetian Senator, Brabantio, has rejected existing social and racial hierarchies shunning the ‘proposed matches/Of her own clime, complexion and degree’ (3.3.231-233), in favour of her marriage to Othello reveals the paternal and social wrath of an interracial marriage at this time.

The villain’s stark use of animalistic imagery to describe the potential consummation of Othello and Desdemona’s marriage connects several fictions surrounding racial difference. The lines: ‘an old black ram/Is tupping your white ewe…the devil will make a grandsire of you’ (1.1.89-92) which Iago shouts to Desdemona’s father, vividly shows the Black/White colour difference between the couple.

Biblical and social ideas which link Blackness to sin are also explicit here as Othello is referred to as the ‘devil’. These lines dehumanise the pair likening their intimacy with bestiality. The fear and disgust toward such a coupling, which may lead to a mixed-race child, implies that their marriage is a threat to social order. Desdemona and Othello’s rupture of social constructs leads Iago to begin the tragic sequence of events.

Shakespeare’s Titus Andronicus also exposes his awareness of racially constructed difference and the fear of miscegenation. When the Nurse enters ‘with a blackamoor child’ in Act 4 Scene 2, Aaron (a Moor and the father of the child) asks what God has sent to which the nurse replies: ‘A devil’ (4.2.63). The editorial note in the 1997 Norton edition of the play confirms that ‘the devil was often imagined as black, and Africans as devils’.

The Nurse’s disgust continues: ‘A joyless, dismal, black, and sorrowful issue./Here is the babe as loathsome as a toad/Amongst the fair-faced breeders of our clime’ (4.2.66-68). Aaron considers and challenges such a negative view of Blackness: ‘is black so base a hue?’ (4.2.71) he asks. ‘Coal-black is better than another hue’ (4.2.99) he proclaims.

Although critics and historians have regarded the term ‘race’ in relation to the early modern period as anachronistic, in these plays it is clear that there is a rudimentary understanding and construction of ‘race’ at this time.

If you have read or seen Shakespeare’s plays, have you noticed other examples of the construction of racial identities?

Resources from Shakespeare, Race and Pedagogy