How much screentime are children getting?

The amount of screen time that young children usually engage in may differ between countries, however the answer is typically a lot!

The amount of screen time that young children usually engage in may differ between countries, however the answer is typically the same – a lot! In 2013, Common Sense Media conducted a nationally representative study of 0-8 year-old children in the USA to answer this very question. 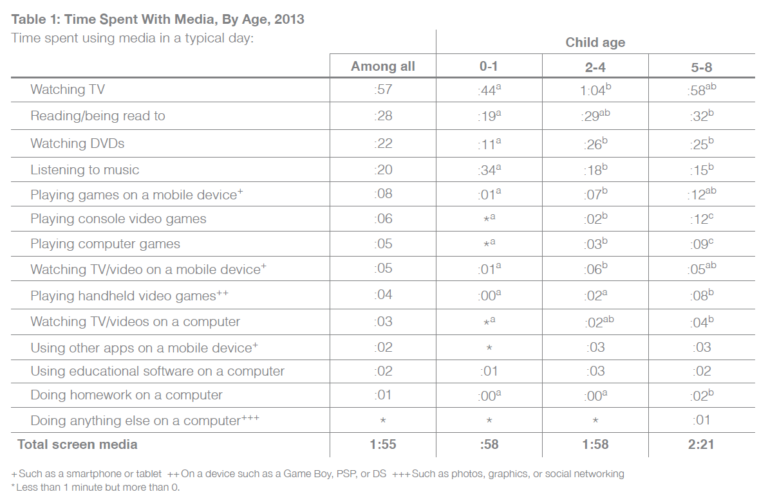 Children’s access to mobile media devices was dramatically higher than it was two years earlier. The percentage of children with access to some type of “smart” mobile device at home (e.g. smartphone, tablet) jumped from half (52%) to three-quarters (75%) of all children in just two years.

Access to mobile media devices and applications among poor and minority children was much higher in 2013 than 2011, but a large gap between rich and poor persisted. Access to high-speed internet among lower-income families had essentially stalled over two years (it was 42% in 2011 and 46% in 2013), and the gap between rich and poor remained (86% of higher-income families had high-speed access in 2013). On the other hand, the gaps in mobile ownership, were reduced. For example, access to smartphones had gone from 27% to 51% among lower-income families over two years, while tablet ownership had gone from 2% to 20% among the same group. In 2011, 22% of lower-income children had ever used a mobile device; in 2013 65% had done so.