What is Nuclear Energy?

What is nuclear energy? Is nuclear considered a low-carbon source of energy?
© Adam Smith Centre

The Neglect of Nuclear Energy

Within the world’s energy mix, nuclear power is often overlooked. This has more to do with politics than the lack of technology. Around the world, there are strong anti-nuclear movements, particularly in Germany and Japan.

With the steep decline in the use of nuclear power, the International Energy Agency (IEA) estimates that this could result in billions of tonnes of additional carbon emissions. Given this grim warning, we should consider increasing nuclear power or at least retaining nuclear’s share in the global energy supply. This will help to ensure a supply of clean energy because it is a virtually zero-carbon source.

How is Nuclear Energy Generated?

Nuclear energy originates from the splitting of uranium atoms, in a process called ‘fission’. The heat produced by fission is used to create steam, which turns a turbine and eventually generates electricity. Compared to other sources of electricity, nuclear energy produces fewer greenhouse gas emissions, including carbon dioxide. Nuclear energy’s low-carbon emission makes it a source of ‘clean energy’.

In 2018, the International Energy Agency (IEA) estimated that nuclear power was the second-largest global source of low-carbon electricity.

Although nuclear energy is a leading source of low-carbon electricity, much of the developed world is ready to abandon it. Germany has decommissioned most of its plants. The US is likely to reduce its dependence on nuclear energy from 20 percent to 10 percent by 2030. Countries like Belgium, Spain and South Korea are en route to a nuclear-free future. By opting out of nuclear power, the IEA warns that this could result in billions of tonnes of additional carbon emissions.

Why is nuclear fizzling out when low-carbon electricity is needed?

Nuclear and its Naysayers

Some environmentalists emphasise the dangers and difficulty of disposing of its radioactive waste. They raise the spectre of rare but devastating nuclear accidents like Chernobyl in 1986 and Fukushima in 2011. These accidents and their associated health effects have eroded public confidence in nuclear energy and blighted the industry.

Since the aforementioned accidents, nuclear energy has become safer. Statistics from Our World in Data show the total fatalities from nuclear energy is dwarfed by fatalities caused by fossil fuel-derived energy. 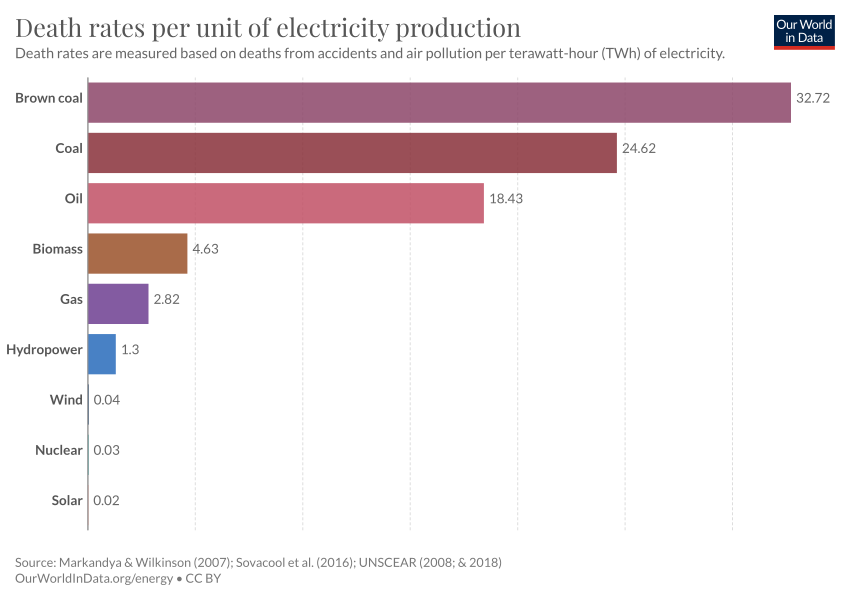 Correspondingly, a study co-authored by researchers from Harvard University and UCL has estimated that about 1 in 5 deaths globally can be attributed to air pollution from the burning of fossil fuels alone. Similarly, both the European Union and the Paul Scherrer Institute found nuclear energy as one of the least deadly major sources of energy.

Although there is mounting evidence to vouch for nuclear energy’s safety, accidents cannot be wholly eliminated. Shellenberger notes that such risks are borne by all major modes of energy production. Therefore, the more relevant question to ask is: Is nuclear energy more dangerous than other energy sources?

In the next article, we will explore the advantages of nuclear energy.