The use of climate model ensembles

In this article, Professor David Brayshaw explains how climate model ensembles are used.
© University of Reading

Climate predictions and projections rely heavily on the use of ‘ensembles’. An ensemble refers to a set of multiple different but equally plausible ‘realisations’, usually intended to be consistent with either a particular set of boundary conditions (eg, a given level of greenhouse gas concentrations) or starting conditions (initial state), depending on whether a Type I or Type II prediction is needed.

Let’s illustrate this with an example. Consider a numerical climate model (a GCM of the type described in Step 2.5). This model, by definition, uses physical equations to ‘evolve’ the climate over time from its initial state. We will use the model to perform two different simulations using identical inputs which differ only very fractionally in their initial state. For example, the wind speed in a single grid box differs by a small fraction of a percent. All other inputs to the models are identical (eg, the atmospheric greenhouse gas concentrations are the same across both simulations). We’ll find that the two simulations begin almost identically but the chaotic nature of the climate system ensures that the difference between them grows rapidly over time to such an extent that the entire pattern of global weather they predict is completely different. The two simulations undoubtedly both represent the same ‘climate’ (the models are given almost identical inputs, including the same greenhouse gas concentrations) but produce completely different realisations of the associated ‘weather’. 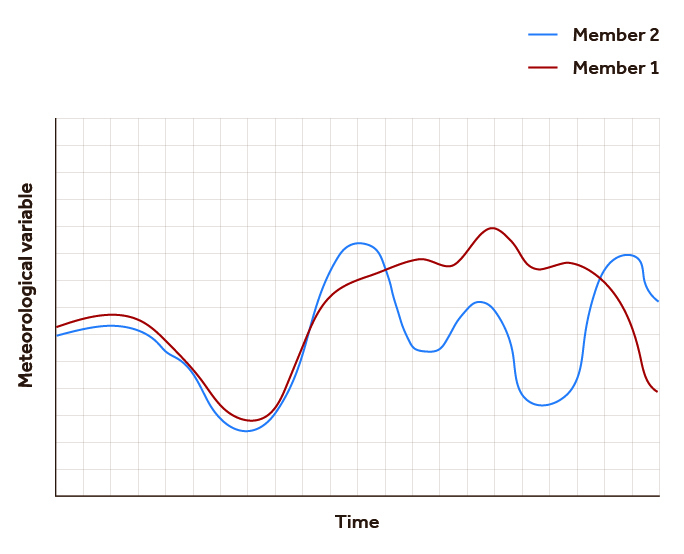 An illustration of an initial condition forecast ensemble. The two forecasts are run with identical forecast models and boundary conditions but with a very small (near infinitesimal) difference in their initial state. To begin with the forecasts evolve together very closely but, over a short period of time (usually a few days), differences begin to emerge.

Initial condition ensembles are used widely across weather and climate forecasting and used for estimating the uncertainty that comes from the model’s internal variability (ie, the changes in weather and climate which are not forced by some external change like an increase in greenhouse gases). They are therefore closely connected to the concept of ‘natural variability’ in the real world. It’s common to find them in season-ahead forecasts that include several tens of ensemble members (for example, 50 or more simulations differing only fractionally in their initial starting state), and in climate projections for the year 2100, which include several realisations derived from the same underlying climate model. Typically, the uncertainty they demonstrate is treated as aleatory in nature – the ensemble is assumed to provide a set of unbiased estimates of an underlying prediction which assumes that the model itself is ‘perfect’.

However, it’s important to remember that all climate models are approximations and subject to biases and deficiencies. So, while an initial condition ensemble with a single model may be able to provide a set of unbiased estimates of the model’s future climate, that model may itself be a poor representation of the real-world.

To address this, multi-model ensembles are used to produce identically forced climate simulations not just from one model but from many models, with the aim of assessing the epistemic uncertainties associated with the construction of each individual climate model. Multi-model ensembles play a prominent role in climate projection (for example, the CMIP programme which is used in many of the papers for the IPCC reports) and are also common in extended-range climate prediction – weather forecasts weeks to years ahead 1.

Interpreting multi-model climate archives is challenging and it has historically been common to interpret the multi-model average as a form of ‘best estimate’ of the real climate. Recently, there’s been considerable debate about this interpretation as it erroneously treats the uncertainty sampled by the multi-model ensemble as aleatory rather than epistemic. If you’re interested in exploring this further, there’s an article that discusses the issue in the ‘See also’ section below.