Spotting features on a weather map

Spotting features on a weather map
© University of Reading

How are you getting along with the Week so far?

In this and the next Step we’ve provided two different exercises to help you test what you’ve just learnt about depressions.

In this first exercise, your task is to match up the words and pictures listed below, with the numbers on the weather map (Figure 1). Should you wish to, we’ve provided this activity on a PDF which you can print.

Please note: The map projection is slightly odd – North is where the lines of longitude converge, in the top left corner. The lines of latitude are the east-west axis. This projection is used for UK weather maps so that as much as possible of the relevant area around the UK can be seen. 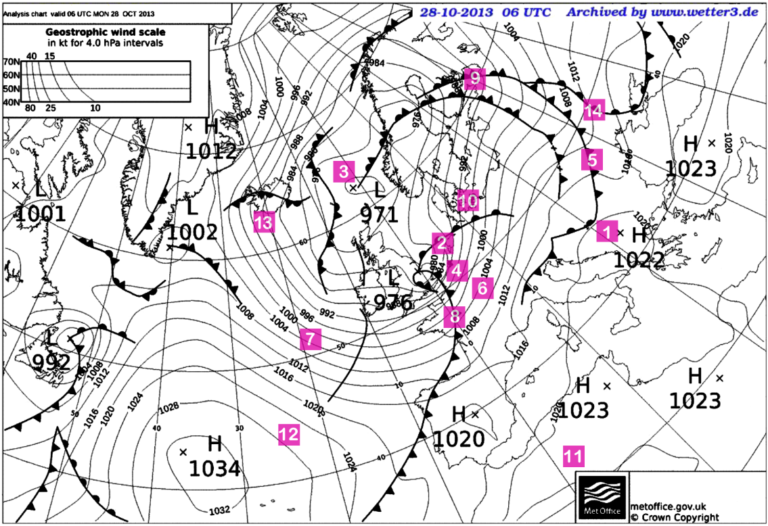 There are some additional features on the weather map (Figure 1) that we haven’t talked about. For example, the black lines running down the west coast of Scotland and off the South West corner of Ireland mark the position of a trough. A trough is an elongated area of relatively low surface pressure. The troughs marked on weather charts may also represent an area of low atmospheric thickness (thickness trough), or a perturbation in the upper troposphere (upper trough). All are associated with increasing cloud and the risk of rainfall.

Another feature which is sometimes shown is a cold or warm front where the triangles or semi-circles on the front have not been filled in – this is a front which is only found higher up in the atmosphere.

The answers will be provided in Step 1.17.