As we mentioned in Week 1 of the course, mid-latitude depressions are one way in which the Earth moves heat from the warm Tropics to the colder Poles.

Together with tropical storms, they move about 1/3 of the heat that is redistributed. Roughly another third is moved by the large scale circulation of the atmosphere and another third by the oceans. We’re going to look at these two circulations a little bit now. 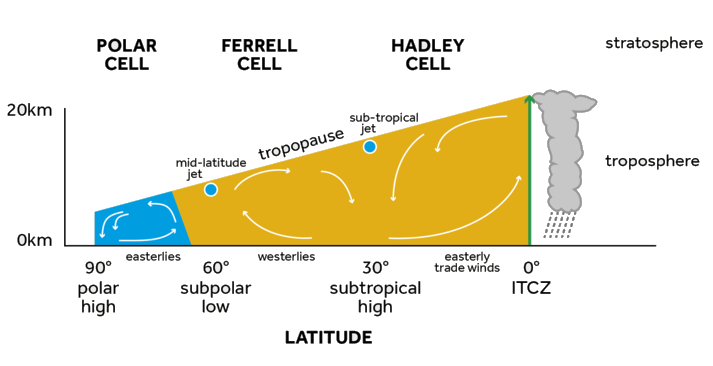 Figure 1: A cross section through the atmosphere, showing air rising and forming deep clouds, at the InterTropical Convergence Zone and spreading polewards, and the Hadley, Ferrell and Polar cells.

View Course
One part of the Earth’s surface is always facing the Sun – it varies between the Tropic of Cancer at the June solstice to the Tropic of Capricorn at the December solstice. This latitude receives the most energy per unit surface area, and is known as the Inter-Tropical Convergence Zone or ITCZ. Here, the air rises, hits the top of the troposphere and spreads out towards the poles. The Coriolis Effect means that this poleward moving air is deflected ever more to the right, becoming westerly (remember we name winds by the direction they are blowing from) and eventually sinking in the sub-tropics and returning towards the ITCZ – this time becoming easterly and giving us the Trade Winds. The whole circulation is known as the Hadley Cell (Figure 1).
Similarly, at the poles where the ground surface is coldest, the air sinks, spreads out towards the Tropics, is deflected to the right and eventually rises and completes a circulation – the Polar Cell.
In between, lies the ‘Ferrel cell’, characterised by surface westerlies and rising motion around 60°. This cell is actually the net product of all the mid-latitude weather systems. Figure 2 shows the 3-Dimensional circulation of the atmosphere.
Within the region encompassed by the Ferrel Cell in the North Atlantic, atmospheric pressure tends to oscillate between a state with lower than usual pressure in the North (near Iceland) and higher than usual pressure in the South (near the Azores) and the reverse situation with anomalously high pressure near Iceland and lower than normal pressure near the Azores. This oscillation is known as the North Atlantic Oscillation (NAO). The weather in western Europe, especially during winter, can be very dependent on which phase of this oscillation is dominant.
It’s worth noting that, if the Earth wasn’t rotating, we’d have just one ‘thermally direct’ cell with air rising at the ITCZ and sinking at the poles where the ground is coldest.

Take a look at the current air flow on the surface of the Earth, can you make out the Trade Winds? Do they tend to be stronger over land or ocean? Where is the ITCZ at the moment?

The large scale circulation of the oceans is similarly driven by warm water rising and colder water sinking. In addition, where ice forms in the polar regions, it forms from fresh water, leaving its salt behind to make the water even saltier and heavier. The sinking of water in the polar areas is therefore driven by both temperature and salinity and is known as the ‘thermohaline circulation’ (Figure 3).

Figure 4: The thermohaline circulation of the oceans.©University of Reading. Adapted with kind permission from Climatica UK.

The full oceanic circulation is also complicated by the Coriolis Effect and the presence of continents (Figure 4).

Figure 5: Currents in the North Atlantic

In the UK, the Gulf Stream and its eastward extension, the North Atlantic Drift, bring warm water from further south in the Atlantic, keeping us approximately 5°C warmer than other countries at a similar latitude (Figure 5). The Gulf Stream is largely wind driven – by the westerly winds blowing over the surface of the Atlantic, whereas the North Atlantic Drift is part of the thermohaline circulation.

The effect of less sea-ice forming in the Arctic (as the climate there warms far more rapidly than most of the rest of the Earth) is expected to have an impact on the North Atlantic Drift. It is very likely that it will weaken and/or move. Although this would imply that the UK and other western European countries would lose a source of warmth, actually, the cooling is expected to be less than the warming caused by other aspects of climate change.