How does this compare to Mars?

How does the energy balance of the Earth compare to other planets? 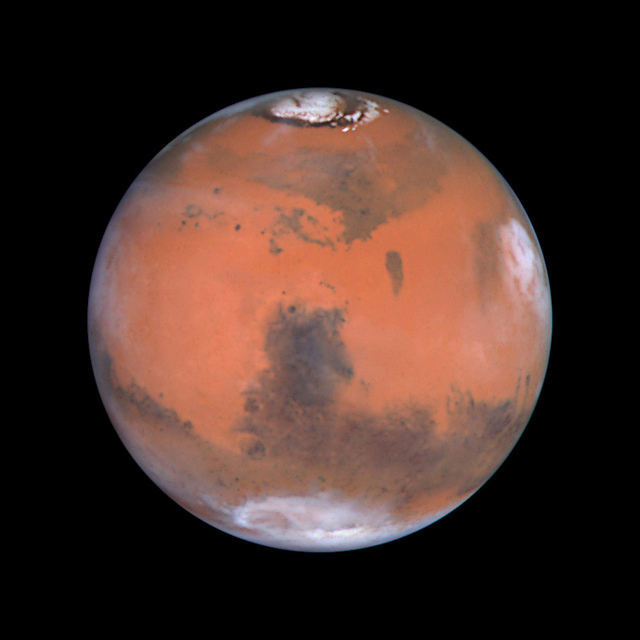 Many scientists have studied Mars and its atmosphere is well understood. Although it’s only around half the size of the Earth, with no oceans and a thin atmosphere composed almost entirely of CO2, it rotates at almost exactly the same rate as the Earth and with a similarly tilted axis. Mars’ weather is dominated by dust storms, the carbon and water cycles and thermal tides driven by the movement of the Sun’s light around the planet.

In the Martian winter, temperatures can be low enough (-133 to -128°C) for CO2 to condense, forming snow and cloud around the pole. This doesn’t have much of an effect on the latent heat fluxes, but does affect the planet’s albedo.

Unlike in the Earth’s atmosphere, very little incoming or outgoing radiation is absorbed by the Martian atmosphere. Mars has much more CO2 than the Earth, but hardly any other greenhouse gases, meaning that whilst one wavelength band is almost entirely absorbed by the atmosphere, the rest of Mars’ heat escapes to space. Mars’s greenhouse effect only warms the planet’s surface by 5 degrees Celsius. This means that, when there isn’t a dust storm blowing at least, Mars’ atmosphere doesn’t have a big effect on the planet’s energy budget.

Every 3-5 years though, things change significantly when there is a major dust storm. Up to 78% of the Sun’s radiation can be reflected or absorbed and never reaches Mars’ surface, leaving the sky a reddish brown. The absorbed solar radiation is emitted as heat in the atmosphere, producing a sort of anti-greenhouse effect, warming the atmosphere but cooling the surface.