Explore Nigeria's health system response to COVID-19 with highlights of the real-life challenges. 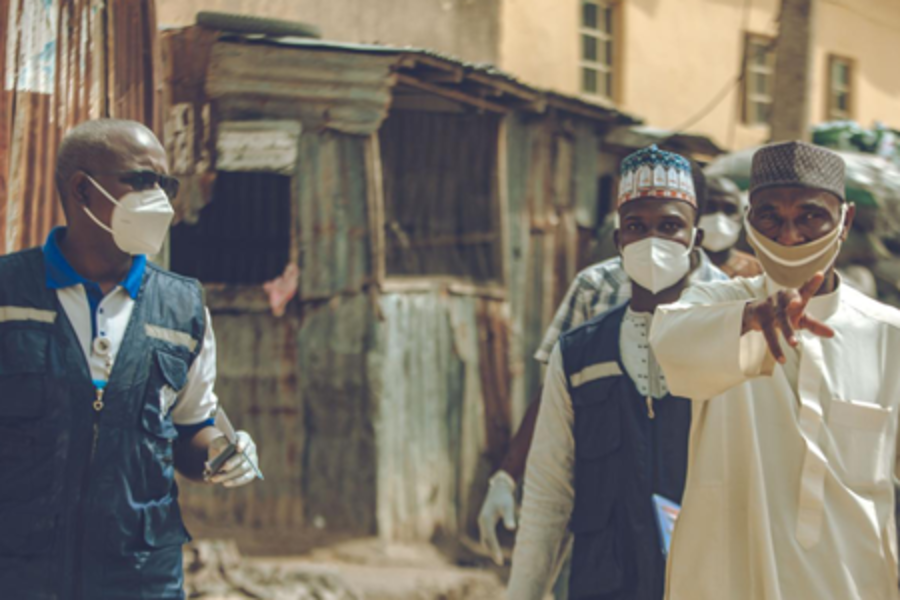 Many countries across the world face exponentially more constraints in funding, capacity, and infrastructure than wealthier nations when coping with the threat of COVID-19, as we learned in the previous step. Like many low- and middle-income countries that are seeing sharp increases in caseloads, Nigeria’s health system is considered too weak to handle an explosion of COVID-191.

As of 10 July 2020, Nigeria, a country of almost 200 million, had had more than 30,000 cases of COVID-19 and had suffered 709 deaths2. Nigeria’s first case, an Italian citizen who worked in Nigeria but who had recently returned from Milan, was confirmed on 27 February, in Lagos State3. When the number of cases in Nigeria rose to eight on 18 March, authorities banned people arriving from countries with more than 1,000 cases, including China, Italy and the United States1. On 30 March, domestic travel was largely banned, and most businesses were closed. Through April, May, and June, the daily cases continued to rise, spreading across the country.

Without a well-funded health system, Nigeria began ramping up measures to keep COVID-19 from spreading as soon as they had their first confirmed case of the disease (in fact, a delegation had already visited China by late February then to understand more about the disease and were still in quarantine after their return). This included shutting down most activities with the threat of arrest, and rapid, easy-to-use tests were quickly deployed — even if they were not as accurate as those which require laboratory diagnosis. In Lagos, Nigeria’s largest city, roughly two-thirds of its 21 million people live in informal shelters without electricity or running water1. The challenge of lockdown here is particularly tough, simply because of the high density and informal conditions in which people live.

The health system is now under huge pressure. Despite the head start on social distancing and testing, laboratory capacity is now stretched incredibly thin. The staff has been working 24/7 and officials are looking for more volunteers to boost numbers in both clinics and laboratories. Stocks of PPE are running low, as are tests and other important supplies and equipment. “For a country the size of Nigeria, we should be getting to the stage of 5,000 to 10,000 tests per day,” reported Dhamari Naidoo, WHO Technical Officer in April, “but travel bans across Africa have made flights scarce, slowing deliveries of laboratory and medical cargo. Everything is being diverted to Asia, Europe, and the US, to help those countries respond to their own outbreaks,” she says. “No matter how well we planned — we cannot plan for this”1.

Many believe that the extent of the virus is not yet fully known in Nigeria. In northern Kano state, for example, there have been numerous reports of deaths suspected to be linked to COVID-19, but there has been almost no testing, which also limits efforts to contact trace5.

Alongside the response to COVID-19, there is an urgent need to sustain routine health services, especially at the community level. Ebola outbreaks in Africa have shown that when hospitals are overwhelmed by one infectious disease, swathes of people die from a lack of care for malaria, pneumonia, and other curable diseases, as well as during pregnancy and childbirth1.

In the battle against COVID-19, health system resilience, accountability and integrity are also more important than ever. Weaker, corruption-prone, and less resilient health systems are even more vulnerable. Much effort tends to be focused on grand corruption at the higher levels of governance and politics, though there is often less emphasis on the less-talked-about but vulnerable areas such as the health sector6.

Nigeria’s public healthcare system has long been underfunded and strikes over pay and working conditions are frequent. The government spends about 4% of its annual budget on health, despite pledging as an African Union member to spend 15% of its budgets on health in 20015. Earlier this year, the Nigerian government also proposed a 43% cut to primary healthcare services, in the context of an economy suffering from the COVID-19 lockdown and low global oil prices5.

We have delved into broad-level and country-specific examples of the complexities of systems preparedness and responses to pandemics.