Skip main navigation
Home / Law / Crime & Criminology / From Crime to Punishment: an Introduction to Criminal Justice / Juries and our attachments to them

Juries and our attachments to them

Issues and arguments relating to juries. 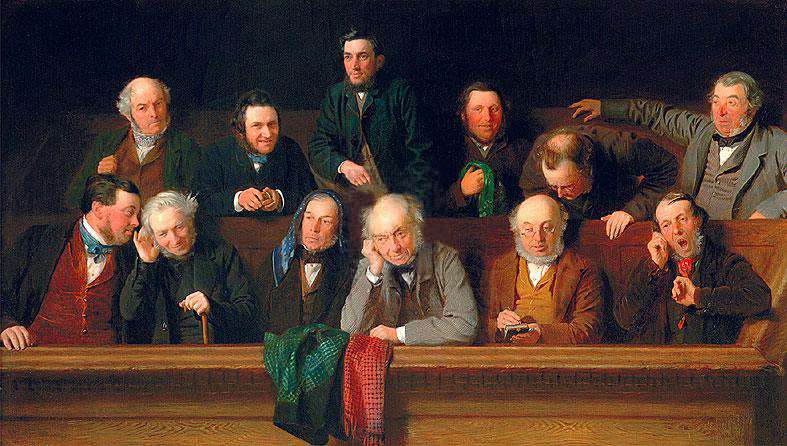 When people think of the criminal trial in England and Wales, their thoughts will often be of the jury. The jury plays a central role in our cultural representations of the trial. They seem to be at the centre of what the trial is ‘about’. It is no surprise in that context that people have expressed strong views on the jury and its role.

From time to time, governments have attempted to introduce laws to limit access to jury trial, but these invariably prove controversial. Patrick Devlin (1966) (you may remember him from week 1) suggested that the jury was ‘the lamp that shows that freedom lives’. Strong words indeed, and intended to convey the message that the jury is more than just a group brought together to make a particular (admittedly very important) decision. Rather, the jury represents the people’s custodianship of the legal process, and their ability to constrain the power of the State. It is not the job solely of State officials, or legal professional ‘insiders’ to pronounce on guilt or to make decisions which might affect the liberty or reputation of citizens.

Others might think that a sense of attachment to juries is essentially romantic rather than rational. Darbyshire (1991) suggests that talk of a ‘right’ to jury trial is overblown; that there is no satisfactory historical, legal or conceptual basis to support the claim of a ‘right’. So, you can’t have your case heard by a jury if the offence in question is a ‘summary’ offence – it will be tried by magistrates in those situations; and you can’t avoid having your case heard by a jury – even if you’d rather it wasn’t – if the offence is ‘triable on indictment only’. She also suggests that the idea of the jury as a site of resistance to State power is problematic. Proponents of juries sometimes refer to the idea of jury equity. This refers to the idea that juries might take the view that a particular law is unduly harsh or oppressive – and that they might refuse to convict a defendant even if the evidence points towards their guilt (an example of this is the acquittal of civil servant Clive Ponting in 1985 in a case about leaking official secrets relating to the Falklands conflict). Darbyshire is troubled by the idea that a jury might act in defiance of the evidence. Jury equity might lead to noble acquittals, but it might also fuel convictions based on prejudice rather than evidence. For Darbyshire, the jury is ‘irrational’ and ‘haphazard’, rather than a comforting bulwark against an overbearing State.