Find out more
Home / IT & Computer Science / Coding & Programming / Data Mining with Weka / How would you apply this in real life?

How would you apply this in real life?

Ian Witten previews how you would use a classifier that Weka has built.

So, you can use Weka to build a classifier. So what?

In the video I showed you how to use Weka to build a J48 classifier for the glass.arff dataset, and look at the evaluation results – the percentage accuracy – and the tree produced by J48. In the quiz you built J48 classifiers for that dataset and another, labor.arff, and looked at the confusion matrix and percentage of correctly classified instances.

But the real goal is to use the classifier on new data. How do you do that? Well, you could imagine following down the decision tree that I showed in the video manually, with a new instance. (To aid readability I’ve made this tree slightly smaller than the one in the video by specifying minNumObj=15): 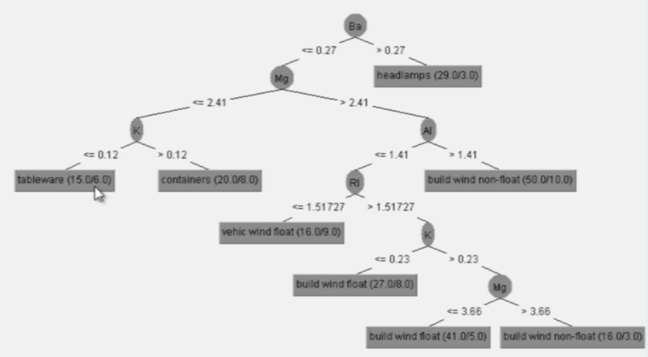 Suppose you had these two instances:

This content is taken from
The University of Waikato online course,

But there’s no need to do this manually! Weka can apply any classifier to a test file of new instances, or save the classifier for future use. It’s all very easy, and you’ll learn how to do such things later in the course.

Remember, this week is a whirlwind tour, and consequently superficial. You’re going to learn much more about how to build, evaluate, and apply classifiers in subsequent weeks. But, for now, let’s press on with our tour.