To draw confidence bands in Matplotlib, we make use of the Axes.fill_between method. This takes at least two arguments but to draw error bands we’ll use it with three.

As an aside, if we call the ‘fill_between‘ method with only two arguments, the area between the curve and the x-axis will be filled.

Let us bring back another dataset we used previously to demonstrate this with our time series data of temperatures in New York for the first week of June 2016.

First, let us import the date class from the ‘datetime’ module.

We then draw the figure and axes for the plot we are intending to display.

We then read the NewYorkHourly.csv on the Notebook, parsing the dates and columns.

We don’t have any actual data for what sort of error there might be in the data, so we’ll generate some by assuming there might be a ±5% error for any data point.

We plot the figure so far with the code snippet below.

Then, we just fill between those two points using the x-values from the original data (the date and time).

The colour of the band is set with the color argument, and we set 10% opacity by setting the alpha to 0.1. 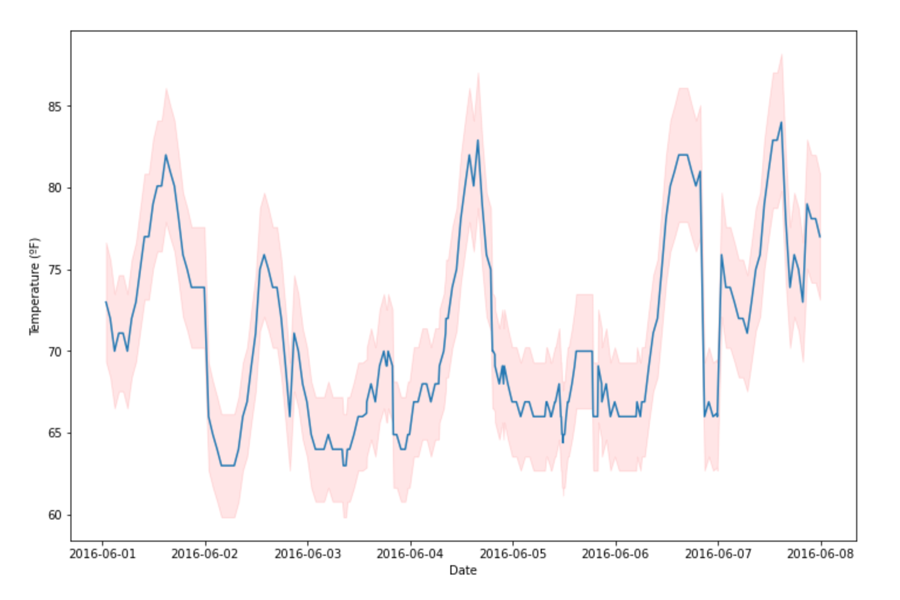 In the output, you can see how the colours are distributed along the line plot to depict probability.

There are more ways to use the fill_between method, and you can read more about it at the official documentation in the link here:

Here you wrote a program using the fill_between method on a line plot. Can you think of examples or use cases where you might want to use this method in a combined plot of both scatter and line?