William Utermohlen and his self-portraits

Interview with Patricia Utermohlen about the art and self-portraits of her late husband William Utermohlen. 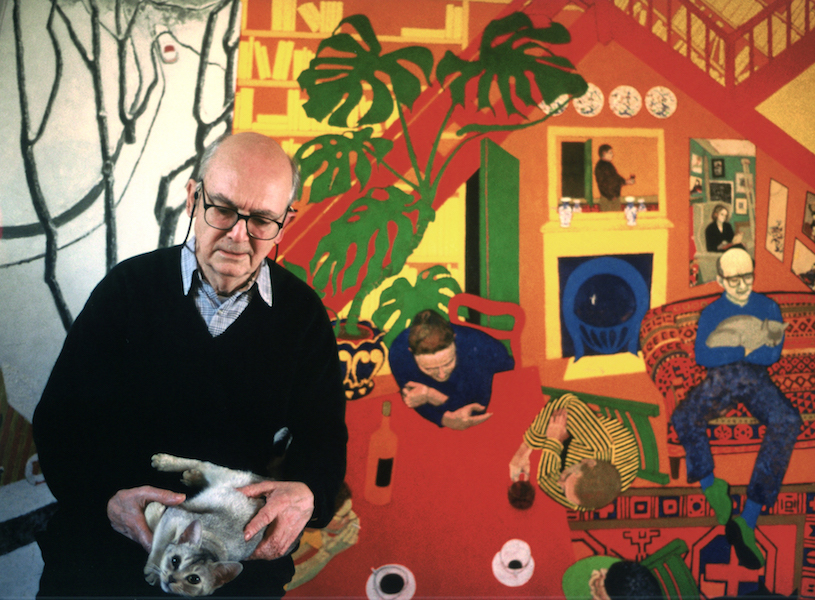 He was a very nice man, he was very shy, an only child with a difficult background. It was not until he received a scholarship to the Philadelphia School of Art that his life changed.

He was a very carefully trained artist, a superb draughtsman. We had a good marriage; it worked well. We enjoyed each other’s company and we were quite different. I was the one who made all the friends and all the noise; he was very quiet and got on with his work. He was adored by his students whom he taught at City and Guilds. He was a good teacher, but he did have the freedom to be able to paint when he wanted to, which was good.

When he got ill something happened to him. He lost that sense of preparation associated with is draughtsmanship. He became a German expressionist. So something went on in his mind at that point which was interesting to see. It suddenly stopped him being so careful.

He was first identified as having Alzheimer’s disease in 1995. We began to realise that he was ill because we got him a studio in Old Street (London), but he kept getting lost trying to get there.

View Course
This was the first time he had a complete realisation to himself that there was something terribly wrong. I did not really want to believe it. We had a very good doctor at the time, and we first went to a psychiatrist before Bill was switched over to Queen Square, and that’s when they told him he had developed Alzheimer’s. That’s when he started doing the self-portraits. I think it was because he wanted to understand it himself.
I hated going to Queen’s Square. They put both me and Bill through the [MRI] machine and when they put the image of mine and his up at the same time I saw the difference in our brains. Looking at the two you could see how damaged his was. It was almost like plants, or a tree. It was sort of black at the top – you could see it.
We used to have to go to Queen Square to get Bill’s Aricept prescription every month. One of the staff in Queen Square was a nurse, a wonderful man called Ron Isaacs. Bill became very fond of Ron, and Ron became interested in Bill because he was always drawing. It was around 1995, maybe 1996, when Ron said “I would like to see those, because you can explain how you are feeling”. And so because Ron asked him to, Bill did his self-portraits.
To be honest with you, I don’t think I was aware that he was doing any more than his usual painting when he suddenly decided to do self-portraits. We lived normally, we went out to parties, and this place was always full of people, and life went on as normal. But then after 2000 it got to a stage where I wanted to cover the mirrors up for him, because he would look at himself and get frightened – that was after he was not able to draw anymore. This is when he went into this extremely silent, somewhat troubling, mood.

But even in the run up to 2000, you can see new elements in his work. A painting called ‘Night’, for example, is so strange. All the different things in the painting are tilted up, slightly strange and out of proportion. Other paintings are about fear and pain. You can see his eyes become more and more terrified. One self-portrait he painted after he came back from Queen Square one time. They’d talked about the fact that they wouldn’t know exactly what was wrong with him until after he died, when they could do a brain autopsy. So when he came home he painted a self-portrait; to one side of the canvas you can see a saw.

I think one of the things that is so destroying for me is that people with dementia are aware of what is happening to them to an extent. At one point my nephew made a bracelet for Bill with his name, address and telephone number as sometimes he would go outside and walk about. But he became very frightened to do that himself and he really needed someone with him. At that time, he was no longer able to paint.
I found out how bad it was when a friend introduced us to an acquaintance, an American lady, who had seen some of Bills work around. She asked me if Bill would do a picture of her and her family. I didn’t see any reason why he wouldn’t want to. Later when we went over to his Old Street studio to have a look, he had not done anything. There was just an empty canvas with a few lines on. So I realised that he had gone out every day, presumably fully intending to work, but when he got in front of the easel he could not work. That’s when we moved his studio back home again, and that’s when he started to do the self-portraits.
Interestingly, I remember once putting some still life out for him to paint, but he wouldn’t paint that. To me it became obvious that he painted the self-portaits to make himself understand what had happened to him. But he did not talk about them at all. However that was not unusual because you have to realise we were two artists – although I was an art historian – living together. Usually two artists living together is not a good idea; but we were lucky! Nevertheless we did not talk about his work but that was a professional decision, it was not because we did not like talking about art.
I feel like I can’t tell you more about the pictures other than what the pictures say themselves, because that is what being a painter is about. Bill was as puzzled as anybody else.
I know lots of people say that the portraits have helped them. He would have liked that.
One of things I hope his work is now able to do is to heighten awareness and erase the social stigma around dementia. I would tell everybody that it is terribly wrong to hide it. We should always feel able to tell everybody around us. And for the person with the dementia, we should make them understand that it’s not something to be ashamed of. It’s like having a broken arm. For us we never had any issues telling anybody about it. It was never a taboo. I think it’s healthy to do that. But some people were frightened by it, and so they backed away.

Would he have carried on painting if it weren’t for Ron? Who knows. All I know is that he was trying to explain how he felt with the self-portraits.