Does our curiosity change as we age?

In this article, we explore the questions relating to curiosity and age.

Does our curiosity change as we age? Does it decrease? Do we lose our childlike curiosity as we grow?

Do Millennials tend to have more curiosity than Baby Boomers, or less? Is age a factor in determining our curiosity to learn new things or to pursue new ideas? Just curious! 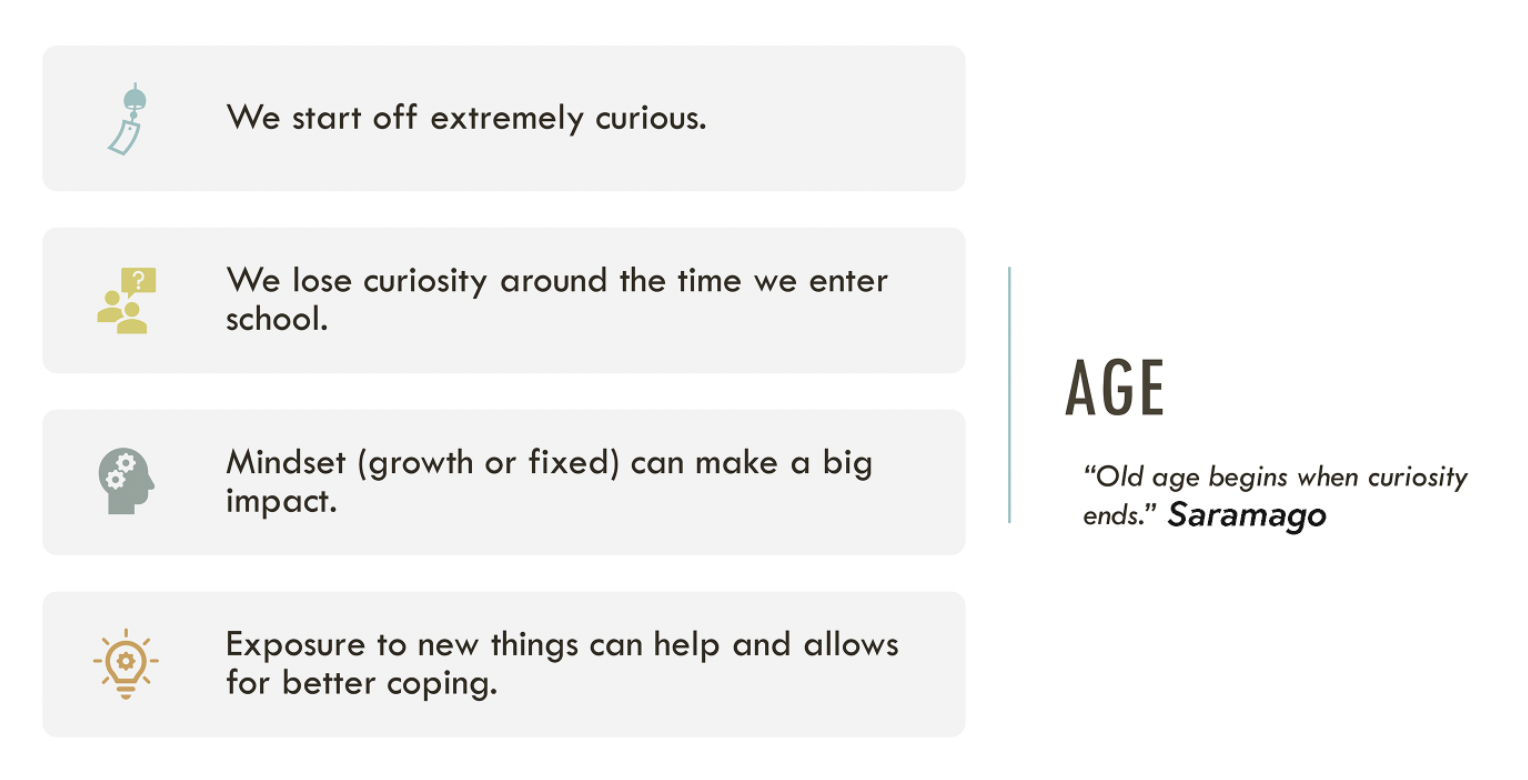 According to Robert Stokoe, director of the Jumeirah English-Speaking Schools in Dubai, United Arab Emirates [1]

‘‘Three-year-olds, on average, ask their parents about 100 questions a day, every day! However, by the time they are ten to 11 years of age they’ve pretty much stopped asking. Of even greater concern is that by the age of 25, only two percent can think outside the box. Curiosity seldom survives childhood. Adult creativity is still powerful, but there is just not enough of it. It can be said that the creative adult is the curious child who survived.’’

View Course
Dr. John Bowlby, a famed psychoanalyst who conducted a wide range of studies on curiosity and age, concurred with Stokoe. However, his acknowledgment included a qualifier.
Best known for his child attachment theory, this psychoanalyst wrote that intuitive curiosity found in young children can be greatly influenced by their mother or caregiver to whom they become feverishly attached. “Secure infants,” Bowlby stated, “who view their caregiver as a secure base, feel safe to explore their environment, knowing they have that secure environment. Insecure infants, on the other hand, who do not feel the safety and security of their caregiver, are far less inclined to explore their environment.” [2]
Carol Dweck [3], author of Mindset: The New Psychology of Success, described the phenomenon in simple, binary terms. Children are greatly affected by their caregivers in terms of putting the child into either a growth or fixed mindset. Dweck described the language that tends to encourage a growth mindset, phrases such as “Let’s find out,” “I wonder,” and “What if . . .?”

Every mind is born with the instinct of curiosity. We all come into the world curious, an innate gift which newborns demonstrate as soon as they are born when they begin to look around. Robert Stokoe [1]

In light of Bowlby’s qualifier, if we take Stokoe’s article at face value, our curiosity is indeed strongest as a child but tends to lessen as we age. If you’ve ever played iPad games with an eight-year-old who is catching on more quickly than you are, you might tend to agree.

Then there is the dreaded 8-10 year slump.

Educators describe a phenomenon in which children between the age of 8-10 years show a declining interest in reading and studies in general. Some say they’re developing interests in video games, organised sports, and other after-school activities. Others say our education system tends to overwhelm them with tests and other assessments. By the age of 8-10 years, students feel burned out.
This phenomenon may be more of a commentary on our education system than on childhood development. As one educator said, “By the age of 8-10 years, kids go from learning to read to reading to learn.”
Research has shown that our brains go into the beginning stages of decline as early as our mid-twenties. But does that decline include curiosity as well? In 2014, the Public Library of Science published a study designed to answer that and related questions.
Researchers had 3,305 volunteers ranging in age from the mid-teens to the mid-forties play a video game called StarCraft 2, which required quick thinking and real-time strategy. The objective of the study was to gauge whether we begin to rely more on our experience and less on our curiosity as we age.
The researchers began the study with the premise that we employ our experience to compensate for our age-related decline, creating what they called “over-the-hill intuition.” Do our brains begin to slow down as we age, therefore causing us to compensate by relying more on our experience?
This game required the participants to make a myriad of dynamic adjustments as they executed a game plan. While each player performed a variety of tasks, they were also required to form a long-term strategy.

The results from this game were both predictable and surprising.

“The speed with which the volunteers made decisions and shifted between tasks definitely declined with the older participants, with the first signs of cognitive decline beginning around the ripe old age of 24.”

I could not, at any age, be content to take my place by the fireside and simply look on. Life was meant to be lived. Curiosity must be kept alive. One must never, for whatever reason, turn his back on life. Eleanor Roosevelt [4]
That research concluded that there was cognitive decline as we aged but showed no decline in curiosity. Related studies have suggested that while our brains may experience decline as we age, our curiosity remains intact and may actually increase. That appears to be particularly true when confronted with topics that may not have interested us as children.
For example, when I was young, I had no curiosity or interest in anything related to history or social studies. However, visiting Pearl Harbor as an adult, I became more interested in learning about the Pearl Harbor bombing in 1941 and related events in ways I would not have earlier.

Becky Thomas, an author and executive coach who works extensively with generational issues in the workplace, has pointed out factors in the curiosity of different age groups.
Thomas’s work has echoed the same theme of John Bowlby’s studies with children, adding that the opposite dynamic can also occur as we grow older. The lack of safety can enhance one’s curiosity.
Thomas explained:

“The safety and security an individual feels about their surroundings is clearly a factor regarding curiosity more than a person’s age. But consider that Millennials grew up in a time with very low trust, due to the Financial Crisis, the events of 9/11, parents losing their jobs, etc. So, because they have low trust, they’re apt to question things at a higher rate than a Gen Xer or baby boomer would at their age. Earlier generations grew up in a very ‘safe’ era and typically trusted leadership, so there wasn’t the questioning and curiosity in the same way there is now.”

Going one step further, researchers Gary Swan and Dorit Carmelli conducted a study that showed, as we age, curiosity can add to the longevity and quality of our lives, up to thirty percent longer and a higher quality of life.
The study, funded by the National Institute of Aging, examined the curiosity levels among nearly 1,200 white men averaging age sixty-five. It also factored in physical health risks, including blood pressure, cholesterol level, and history of smoking, cancer, depression, or stroke. The subjects were followed for five years to see if curiosity had any differentiating effects on the length or quality of their lives.
The results showed a strong correlation between curiosity and strong physical and psychological health. They were not startling, but the strength of the correlation between the two was surprising.
After separating out the physical variables, the men who showed higher levels of curiosity were thirty percent more likely to live beyond those five years than the men with merely average curiosity. A related study of more than a thousand women found similar results.

“Those with higher levels of curiosity showed better coping skills with new challenges or new experiences. They were also more adept at establishing new friendships and showing new ways to solve problems. The adaptive value of exploratory, problem-solving behavior is fundamental to living longer.”

“When we are children, our curiosity leads to effective intellectual and emotional development. When this child-like trait continues, it enhances our ability to live longer with more active lives.”

Imagine children as bundles of curiosity with an innate desire to discover the world around them. Now imagine shutting off or discouraging that natural tendency.
The loss of curiosity is not a function of aging but a learned fear of knowledge.

What happens to creativity and curiosity as we age? We will find out more in Week 2 of this course!
What other features and attributes change as we age? And how would you tackle maintaining your curiosity as you age?