Relationship Between Curiosity and Motivation

What motivates us? Learn more about the relationship between motivation and curiosity.

It is clear that survival is a key stimulant for curiosity and we’ve looked at how curiosity can change depending on age.

So what about motivation? What motivates us? And what is the correlation, if any, between motivation and curiosity? Assuming the two are connected, which happens first? Does motivation drive us to curiosity? Or does curiosity lead to motivation?

These are the types of questions I had to find answers to. Again, I was curious. For example, did my curiosity about the subject of curiosity motivate me to write this book? Or was I already motivated, and therefore became curious to learn more about the subject so I could write it? 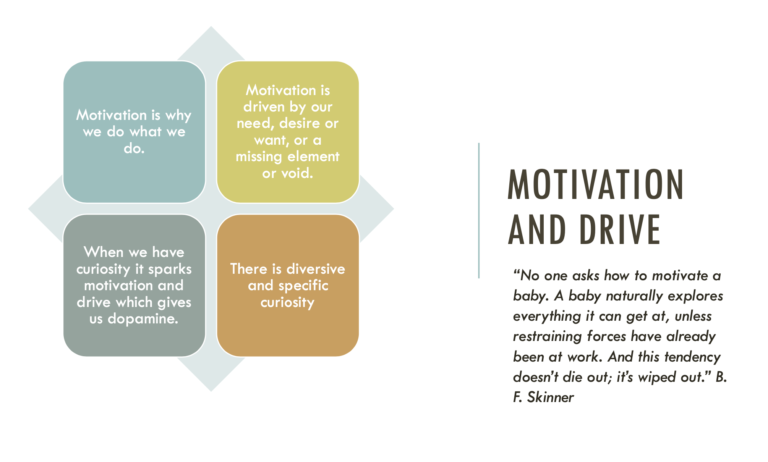 Let’s go back to the beginning.

Motivation is why we do what we do. We can typically find motivation for taking a certain action or believing a certain way by filling in the blank: I do an action because_____. I exercise because I want to be healthy when I am older. I work at my current job because I need the benefits. A motive is what prompts us to act in a certain way, or at least to develop an inclination for a specific behavior.

Okay, so curiosity is the interest to learn more about a subject; motivation is the desire to do something with that information. From my own studies, from the scientific research, and from the stories of professionals and motivational speakers interviewed on my program, there’s agreement that..

Our motivation is driven by a combination of three factors:

Some individuals are motivated by the notion that something is missing in their lives. The most vivid examples can be found in individuals who have physical drawbacks. From blind musicians such as Ray Charles and Stevie Wonder to the extraordinary achievements of Helen Keller, there are millions of people whose motivation and curiosity have been enhanced by a void in their sensory abilities.

These individuals are like many who have suffered similar mishaps or shortcomings, be they mental, emotional, or physical. Driven by those shortcomings, they illustrate the power of curiosity and motivation.