Is Intelligence Correlated with Curiosity?

In this article, Dr. Diane Hamilton discusses her research on curiosity and intelligence. Do people acquire intelligence because they are curious?

The words “intelligent,” “intelligence,” and “IQ” are as common to us as the words “smart,” “genius,” or “brilliant.” Since childhood, it’s been instilled in us that we’re either smart or not smart. 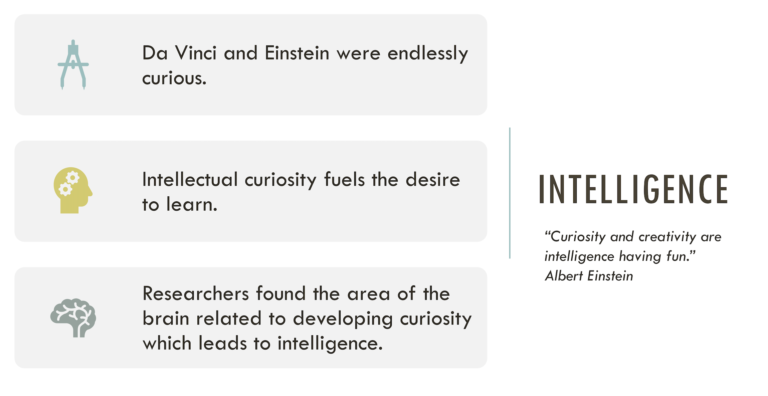 Picture your brain forming new connections as you meet the challenge and learn. Keep on going. Carol Dweck [1]

View Course
Since its early beginnings as the study of human behavior evolved, the term “intelligence” migrated from the realm of philosophy to become a central ingredient in psychology. Today, the study of intelligence has advanced significantly; however, psychologists are still debating its exact definition.
Despite differing views, scientists and behaviorists generally conclude its definition to be: The mental capability to, among other things, reason, plan, solve problems, think abstractly, comprehend complex ideas, learn quickly, and learn from experience.

From intelligence to IQ

The term “intelligence quotient” (IQ) as the measure of one’s intelligence was coined by a psychologist named William Stern while at the University of Breslau in Germany in 1912. Though there has been much refinement over the years, the IQ test, its scoring systems, and its standards for administering remain the standard for measuring intelligence.
Tests for IQ are designed not only to assess book learning (a narrow academic skill) or test-taking abilities, but also to assess an individual’s broader, deeper comprehension of their surroundings. How well is that person able to understand a situation and effectively solve problems?
From the scoring and testing standards that have evolved, it appears that approximately two-thirds of the population score between 85 and 115; about 2.5 percent score above 130; about 2.5 percent score below 70.
In the earliest studies of intelligence, the subject of IQ was rather binary; a person was either smart or not smart. Since the IQ test was first introduced, intelligence has become more expansive in scope, but beliefs about it have largely remained the same. It was believed the intelligence you are born with is the intelligence you die with. Little could be done to change that fact.
With the IQ test, behavioral scientists continued with that rather simplistic view that intelligence was intelligence, and the IQ test was the measuring standard. You’re either smart or not smart, and your IQ score told us how smart. Other attributes such as personality or talents were ancillary by-products of your intelligence. But your intelligence, scientists continued to believe, was a simple, straightforward calculus.
However, in the second half of the twentieth century, those views began to change.

In the 1960s, a British psychologist named Raymond Cattell [2] put forth the proposition that intelligence took two distinct forms. The first is our foundational intelligence. That, Cattell said, equates to our base level knowledge, generally formed through our early learnings and experiences. We learned our ABCs, and we learned that 2 + 2 = 4. We learned that dogs can bite, and bees can sting.
That foundational intelligence, which relies heavily on past knowledge or learnings, is what Cattell referred to as “crystallised” intelligence [3].
Cattell then introduced a second type of intelligence that equates to our ability to grasp new lessons or new experiences, which he referred to as “fluid” intelligence. Cattell, along with one of his former students, John Horn, conducted further research and wrote a series of publications on fluid versus crystallised intelligence. Their work changed several earlier beliefs on the subject.
Their work was also instrumental in destroying another earlier theory that intelligence could not be developed. That belief was dramatically changed when they conducted a variety of studies demonstrating that fluid intelligence could indeed be developed. Those studies put the subject of intelligence in a brand-new light.

To take the analysis of intelligence a step further, in the 1980s, a psychologist named Howard Gardner led a series of studies to examine other elements of our intellect. He studied things such as talents and special abilities, which were traditionally viewed as traits ancillary to intelligence. He determined that those traits were different forms of intelligence.
Just because someone is not good at math, Gardner concluded, it doesn’t mean that person isn’t intelligent. Intelligence comes in different forms or specialties, he said. In 1983, he wrote of nine different types of intelligence [4], including elements now associated with emotional intelligence, such as interpersonal and intrapersonal intelligence.
With Gardner’s work, the concept of intelligence was no longer binary; it was multidimensional. To add to the topic’s growing complexity, scientists began to dissect the IQ test itself, to look at the true measure and behavioral meaning of one’s level of intelligence. If someone is regarded as smart, what differentiates that person from someone who’s regarded as really smart?

Considering that intelligence is multidimensional, are there elements that underlie or support all types of intelligence?
Let’s get to the question at hand: what is the correlation between intelligence and curiosity, your IQ and your CQ (curiosity quotient)?
Having intelligence is clearly important to academic performance. But, like so many other ingredients for achieving success in life, intelligence is necessary but not sufficient.
Everyone knows of a brilliant kid who failed school or someone with mediocre smarts who made up for it with hard work. That’s why research psychologists are looking at factors other than intelligence that make some students do better than others.
One element is conscientiousness, that is, the inclination to go to class and do the required homework. People who score high on this personality trait tend to do well in school.
Sophie von Stumm from the University of Edinburgh in the UK is coauthor of “The Hungry Mind: Intellectual Curiosity Is the Third Pillar of Academic Performance.” She stated, “It’s not a huge surprise, if you think of it, that hard work would be a predictor of academic performance” [5].
Von Stumm and her co authors concluded that curiosity is another important factor. “Curiosity is basically a hunger for exploration,” stated von Stumm. “If you’re intellectually curious, you’ll go home, you’ll read the books. If you’re perceptually curious, you might go traveling to foreign countries and try different foods.” Both of these could help students do better in school.
The researchers performed a meta-analysis, gathering the data from about 200 studies totaling about 50,000 students. They found that curiosity did, indeed, influence academic performance. In fact, it had quite a large effect, about the same as conscientiousness.
Combined, conscientiousness and curiosity had as big an effect on performance as intelligence. von Stumm wasn’t surprised that curiosity was so important. She explained, “I’m a strong believer in the importance of a hungry mind for achievement, so I was just glad to finally have a good piece of evidence. Teachers have a great opportunity to inspire curiosity in their students, to make them engaged and independent learners. That is very important.”
Employers may also want to take note. A curious person who likes to read books, travel the world, and go to museums may also enjoy and engage in learning new tasks on the job.
“It’s easy to hire someone who has done the job before and, hence, knows how to work the role,” von Stumm said. “But it’s far more interesting to identify those people who have the greatest potential for development, the curious ones.”

The authors of a 2011 study published in Perspectives in Psychological Science found that curiosity is a big part of academic performance. According to the study, personality traits such as curiosity seem to be as important as intelligence in determining how well students do in school. In fact, as Einstein said, “Curiosity is more important than intelligence.”
So, we now know that curiosity is not the exclusive domain of the intelligent, but curiosity can increase our intelligence.
But what if we look further into our own behaviours in relation to intelligence? It is important that we consider emotional intelligence as well and the impact it has on our decision making and intuition. As we find out in the next step, EI is closely linked to curiosity.

We know we are all born with high levels of curiosity. The research shows around age five it starts to dwindle.
How has your level of curiosity been impacted since you were young?
How have you been able to keep it alive?