In this article, Dr. Diane Hamilton dicusses the development of curiosity and explains the second main inhibitor of curiosity, assumptions.

Think about children under five or six years old. Almost everything they see prompts a question.

Their minds are blank slates, absorbing everything in their paths. If they get confused, they simply ask more questions. Without many prior experiences, young children have few assumptions from which to comprehend the world around them, only curiosity.

While their childlike curiosity is theoretically a desirable and necessary trait, it can be an inconvenience or even an annoyance to those receiving the questions. (This can be true with adults as well.) 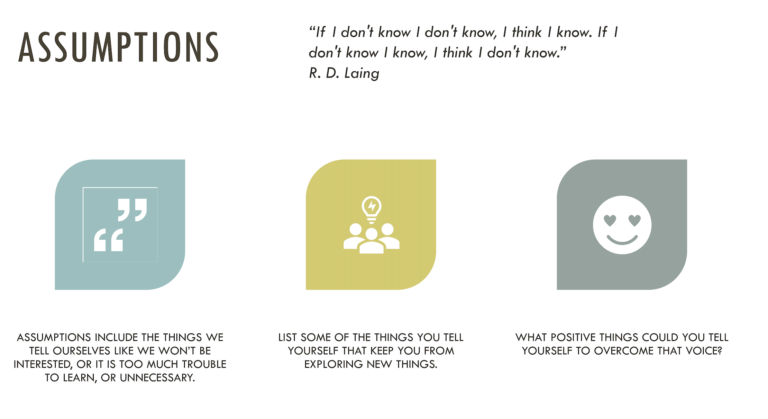 In research on this subject, teachers were given a list of common children’s traits and asked to check those they found desirable in their students. Almost all checked curiosity. But when asked to list desirable traits from scratch, almost none mentioned curiosity. It seems that busy parents and overworked school teachers eventually seek relief from children’s wondrous trait of seemingly endless questioning.

The problem comes when adults stop encouraging children to ask questions. Instead, we give them our own answers and simply tell them what to believe. The result? Eventually, they tend to stop asking questions and start assuming.

Given that scenario, by the time people are thirty or so, they’ve assumed their way to knowing all they need to know to survive in this world. They’ve soaked up knowledge and beliefs from parents, teachers, coaches, churches, college professors, and everyone else who has an opinion. While they may dismiss some of this mountain of data, what they accept they treat as fact, not to be questioned or disputed.

We are these grown-up children.

We accept that the moon landing was real (and not a hoax, as some websites suggest). We accept that hard work is the key to success and that exercise makes us healthier. Our knowledge base is rather well established. Facts are facts.

Or are they? While I do tend to agree with those assumptions, others I’m not so sure about.

Answer this: which of the following statements are true?

Would any of the above seem questionable and warrant further examination?

While at one time the medical community believed all these statements to be true, all are now believed to be false tales perpetuated by outdated information.
While we’ve learned a lot about health issues, it remains an evolving science, as do many aspects of our lives. Distinguishing truth from assumption is a never-ending process.

What about these assumptions?

These, too, are statements many people accept as true, but all have been debunked as myth.
Nevertheless, whatever our truths tend to be, factual or not, they give us our philosophical, physical, spiritual, and socioeconomic foundation. That foundation, however, is a combination of facts, near facts, and a whole lot of assumptions, the second of the FATE impediments to our curiosity.
When we are open to new possibilities, we find them. Be open and skeptical of everything.” Todd Kashdan [1]

Let face it, assumptions are necessary.

They’re also easy, convenient, and safe. They’re how we get things done. Once we assume something to be true, we can move on with our life and plan accordingly.
The JFK assassination was complicated and full of mystery and uncertainty. The Warren Report on the assassination, by contrast, provided us with a neat set of assumptions (if we accepted them) that allowed us to move forward. The message was: Nothing to see here, folks. Keep moving.
If I go into business based on the assumption that I will generate $100,000 in revenue a month in my first year, and by month six I’m generating less than $3,000 a month, at what point do I question my assumptions? When do I become curious about why I’m not succeeding?

Assumptions are easy, but you see how they can bite us.

In contrast to these assumptions, curiosity is the perpetual fly in the ointment. Curiosity is the element that, instead of proceeding forward with an existing set of “truths,” prompts us to stop the train.
At what point do we inject our curiosity to challenge existing beliefs and assumptions? When they don’t jive with our own beliefs and assumptions? When we don’t get a satisfactory answer after asking why? How do we decide when it’s best to “go along to get along” and when it’s best to ask why?

Assumptions can feel safe and can be powerful antidotes to curiosity. They provide a safe haven in which to move forward, even if they’re only partially correct. Robert Stevenson, international public speaker and author of How to Soar Like an Eagle in a World Full of Turkeys, told me of an interesting exercise he does with his audiences.
He tells people to put their hands over their watches to cover the faces. Then on the left side of the board, he writes I, II, III, and IV, and on the right side of the board, he writes I, II, III, and IIII. He proceeds to ask participants which set of numbers (right or left) would be the correct designations on a watch that has Roman numerals.
Most people, he said, pick the right side without question. But even though the Roman numeral IIII doesn’t exist, it does appear on most watches using Roman numerals.
Interesting. I had to check this because I didn’t believe it, but he got me, too. Many watches do use IIII, not IV. Because part of the information listed is correct, we assume that all the information is correct.

As we grow older, we become more comfortable with our surroundings and our truths. Our experiences shape our perceptions, and we make assumptions based on those experiences. Sometimes we do so doggedly, despite data to the contrary. When faced with an unfamiliar situation or a problem, our minds perceive it as a gap and hence a point of confusion or conflict. To resolve this discrepancy, our minds naturally tend to fill in the blanks with information obtained from what we know from our experiences. That’s our frame of reference, our data base. Many times, we form our truth from those assumptions without even realizing it.
Jay Samit [2] assumed that he had little chance in this world. Since childhood, he’d been told he wasn’t smart enough to succeed due to his dyslexia. He carried this assumption with him as truth throughout his childhood and into his adult life until he learned that Steve Jobs, Ted Turner, Richard Branson, and about one third of all business owners were dyslexic.
We make decisions that shape our careers and our very lives based on assumptions that may or may not be true. If we fail, we often look to external reasons for those failures without considering our own assumptions.
James Pitaro [2], previously the chairman of Disney Consumer Products and Interactive Media, was named president of ESPN in 2016. ESPN is Disney’s flagship sports and entertainment network. It had long served as the standard bearer for sports television, but the network had been lagging in ratings and revenues. The new president had his work cut out for him.
In his inaugural meeting with his new ESPN staff, Pitaro drew a distinction between curiosity and assumptions, and he clarified which way he intended to take the network. He said, “If creativity is a process where new, original, and valuable ideas are developed, then operating on a foundation of assumption is likely to take us into the opposite direction of creativity.”

Knowing our likes and dislikes

We sometimes assume that we won’t like things for a variety of reasons. It may seem odd, or it may sound boring, or no one we know has experienced it. Maybe we played a game with a particular person and it wasn’t fun, so we assumed that we didn’t like the game. Then we tried playing it again with someone else, and it was lots of fun.
Do we resist something new based on assumptions, or are we willing to give it a try? From the shows we binge watch on TV to the mystery novels we read and reread and the foods we eat, what’s familiar seems safer and more comfortable than what we haven’t tried. Why disrupt things?
Author and former CEO G. Ross Kelly spoke of the differing responses he would get when challenging his employees. He described assumptions as the ultimate paradox of curiosity. “The more people discovered new knowledge,” he said, “the more curious they became. They wanted to know more. In contrast, the more people assumed they already knew the answer, the less curious they became.”
“Assumptions,” he concluded, “generate complacency, whereas, curiosity discovers new thinking and innovation.”

There are many sub-components of assumptions including feeling a sense of disinterest, apathy, or that things are just unnecessary.
List some of the things that you tell yourself that keep you from exploring new things?
Share your comments below!