Anatomy of the eye and defining visual acuity

What makes up the different parts of the eye? How do we measure how well someone can see (their visual acuity)? 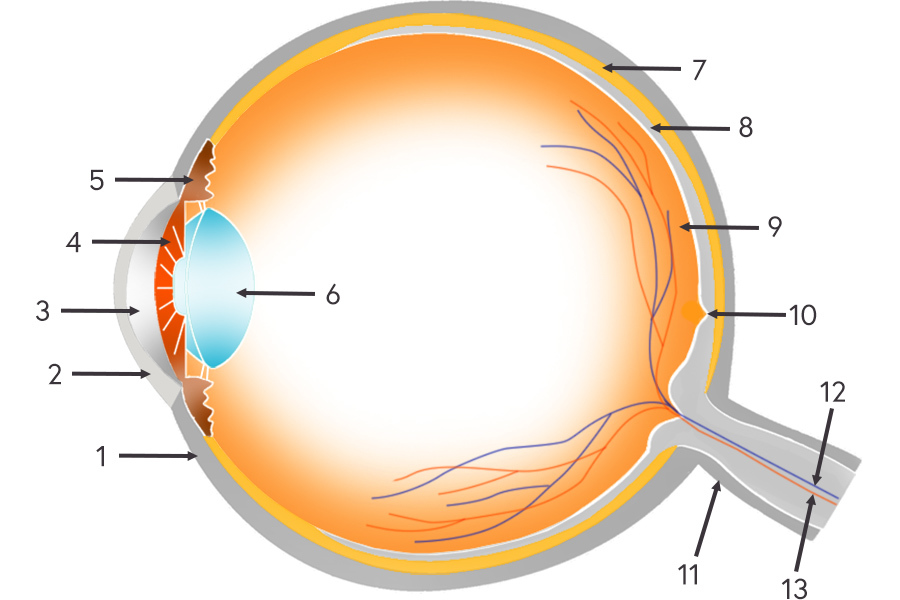 1 Sclera: A white, tough outer protective coat of the eyeball.

2 Cornea: A transparent curved outer coat of the eye through which light enters. The cornea helps to focus light through the pupil to produce an image on the retina.

3 Anterior chamber: The region between the lens and the cornea which is filled with a clear fluid called aqueous humor. This fluid provides oxygen and nutrients to the lens and cornea.

4 Iris: The coloured ring around the pupil. Every person has different levels of the colour pigment melanin in their iris. Light is scattered by the pigment, giving different shades of colour to the iris such as brown, blue, green etc. The iris is a sphincter muscle that controls pupil size and manages the level of light entering the eye. Pupils are dilated in a dark environment and constricted in a bright light. Health workers use mydriatic drugs to artificially dilate the pupil, for example to carry out refraction or to take retinal photographs. Miotic drugs are used to constrict the pupil, for example to manage angle closure glaucoma.

5 Ciliary body: This is located just behind the base of the iris. It has three functions: it provides suspension ligaments for the lens, it produces aqueous humor and it works to change the shape of the lens by contracting and relaxing its muscles.

6 Lens: Transparent elastic tissue in an ellipsoid biconvex shape, which lies behind the iris and is bathed by aqueous humor. During accommodation, the lens shape changes to focus on objects at different distances. To focus on near objects the shape is adjusted to become more biconvex than for far objects.

7 Choroid: A layer of the eye, between the retina and sclera, that supplies oxygen and nutrients to the retina. Choroidal blood flow constitutes 85% of blood flow around the eye and it also helps the eye to maintain its core internal temperature and volume.

8 Retina: The innermost coat of the eye, with light sensitive photoreceptors (also known as rods and cones) and connected through a neural layer to the optic nerve. Light triggers a series of chemical and electrical signals which are carried via the neural layer and optic nerve to the visual centres in the brain.

9 Vitreous humor: A clear gel filling the space between the lens and retina and which makes up four fifths of the volume of the eyeball

10 Fovea: Fovea: A small depression about 1.5 mm in diameter at the centre of the macula. The macula is a 5.5 mm diameter pigmented area within the central retina, at the back of the eye. The fovea is avascular and is composed of closely compacted photoreceptors (cones) which is responsible for our sharp central vision and visual acuity..

11 Optic nerve: Located at the back of the eye (also known as the second cranial nerve) the optic nerve transfers neural impulses from the retina to the visual cortex.

12 Central retinal vein: Part of the retinal circulation system, it takes blood away from the retina.

13 Central retinal artery: Part of the retinal circulation, it brings oxygenated blood to the retina.

Throughout this course we use the Snellen (metre) measurement of visual acuity to indicate how clearly someone is able to see. 6/6 represents perfect vision under the Snellen system. In other contexts Decimal or LogMAR measurement systems are preferred. The chart shown below allows you to convert from one system to another. 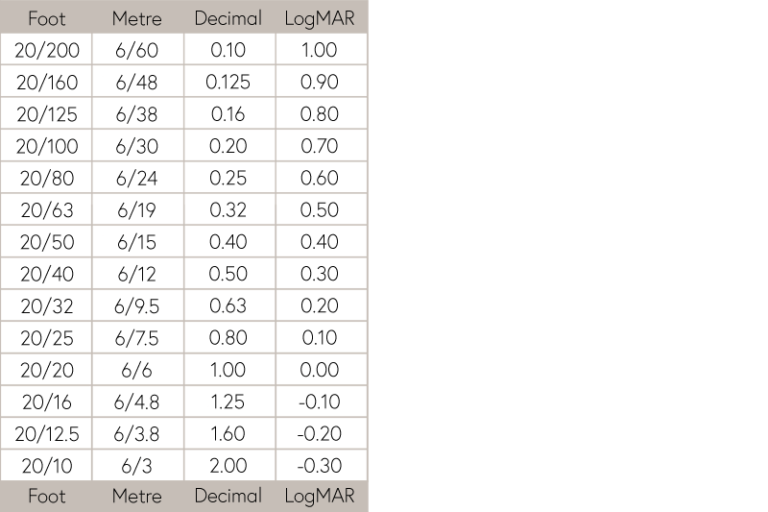