What was life like at Clementhorpe Nunnery? In this article, Dr Tim Wingard discusses the house and its links with York. 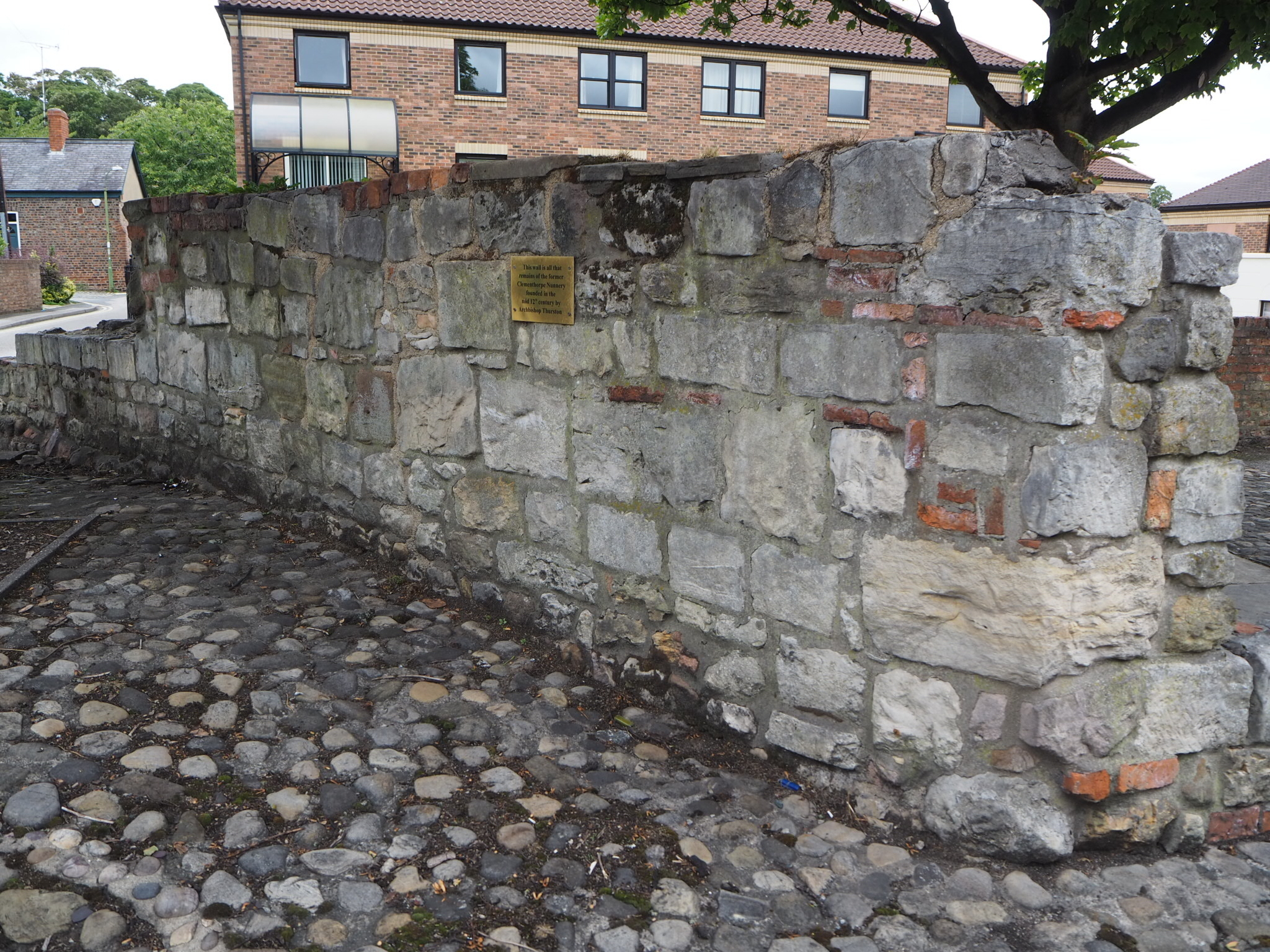 The priory from which Joan of Leeds had fled, Clementhorpe Nunnery, was the only religious community for women in the immediate vicinity of York during the Middle Ages. (The Bar Convent at Micklegate Bar, today the most famous religious house for women in the city, was not founded until 1686).

Clementhorpe Nunnery was founded as a Benedictine House around the year 1130 by Thurstan, Archbishop of York. Thurstan tried to recruit the famous holy woman Christina of Markyate to be the house’s first prioress (leader of the nuns), but she declined, and he was forced to search elsewhere. The size of the community varied over time, but usually included around thirteen nuns, as well as an uncertain number of servants, and a small group of lay women and girls who boarded at the nunnery.

Clementhorpe Nunnery was located just outside the city walls in one of the suburbs to the south of York, next to the river Ouse. This was an attractive location, and the nunnery precinct was surrounded by a flourishing village as well as gardens, orchards and meadows. The priory’s conventual church also served as the parish church for the residents of Clementhorpe. The nunnery likely owned a staith (a landing-place for ships to unload cargo and passengers) on the nearby riverbank, enabling it to receive supplies and visitors.

Consequently, Clementhorpe Nunnery maintained a close relationship with the city of York and its people. Many of its prioresses were from wealthy and influential York families: for example, Constance Basy, elected prioress in 1315, was the daughter of the notable York citizen Roger Basy, who had represented the city at the parliament of 1295. The close ties between the nuns and the city are also reflected in wills and testaments today held at the Borthwick Institute for Archives: many prominent citizens left bequests to the nunnery and its residents, including gifts of land, money, tableware, and church furnishings. Many York residents, both men and women, asked to be buried within the grounds of the conventual church. Clearly, the nunnery held a close spiritual and personal connection for many people in the city.

The nunnery also had many economic connections with York and beyond. Clementhorpe Nunnery owned a patchwork of properties, including buildings within the city walls and its surrounding suburbs; however, the majority of its estates were comprised of farming land located further afield, clustered past the south-west of the city within the Vale of York, as well as some scattered possessions across Yorkshire and as far away as Southwell in Nottinghamshire. The nunnery had obtained these lands gradually through a mix of its initial endowment after having been being founded by Archbishop Thurstan, as well as subsequent bequests over the centuries. The rents it received from these various properties made up the majority of the nunnery’s income, and this money supported the daily running of the house. By the time of the Dissolution of the Monasteries under the reign of King Henry VIII in the 1530s, when Clementhorpe Nunnery was finally closed down, the average annual income of the house was £65, which would be worth roughly £27,400 today. This made it among the wealthier nunneries in Yorkshire, though this was still a relatively meagre income for a community of its size, and it is likely that the nunnery was only able to balance the books with some difficulty.

Joan of Leeds was not the only nun of Clementhorpe who struggled with the demands of religious life. In 1300, another nun, a certain Cecily, fled the nunnery late at night on horseback to go to Darlington, where she lived with one Gregory de Thornton for several years. In 1313, a York priest, John, was put on trial for having sex with Alice of Leeds, another nun of Clementhorpe. In 1331, another apostate nun, Isabel Studley, was found guilty of committing ‘sins of the flesh’ and was sent thirty miles away to Yedingham Priory to undergo penance. Perhaps the close proximity of Clementhorpe Nunnery to the city of York, from which the house benefitted greatly in many other respects, also increased the dangers of worldly temptation for some of its residents!

Despite the concerted efforts of the late medieval Church to impose seclusion and separation from the secular world onto nuns, Clementhorpe Nunnery and its inhabitants were deeply embedded in the everyday lives of the city of York through economic, spiritual, and personal ties. Today, all that remains of the nunnery is one stone wall – but by carefully studying records like the archbishops’ registers, we can piece together the experiences of women like Joan of Leeds and her sisters.

Having read about the history of Clementhorpe Nunnery, how successful do you think the Church was in imposing claustration on nuns? Please share your comments with colleagues using the Comment function