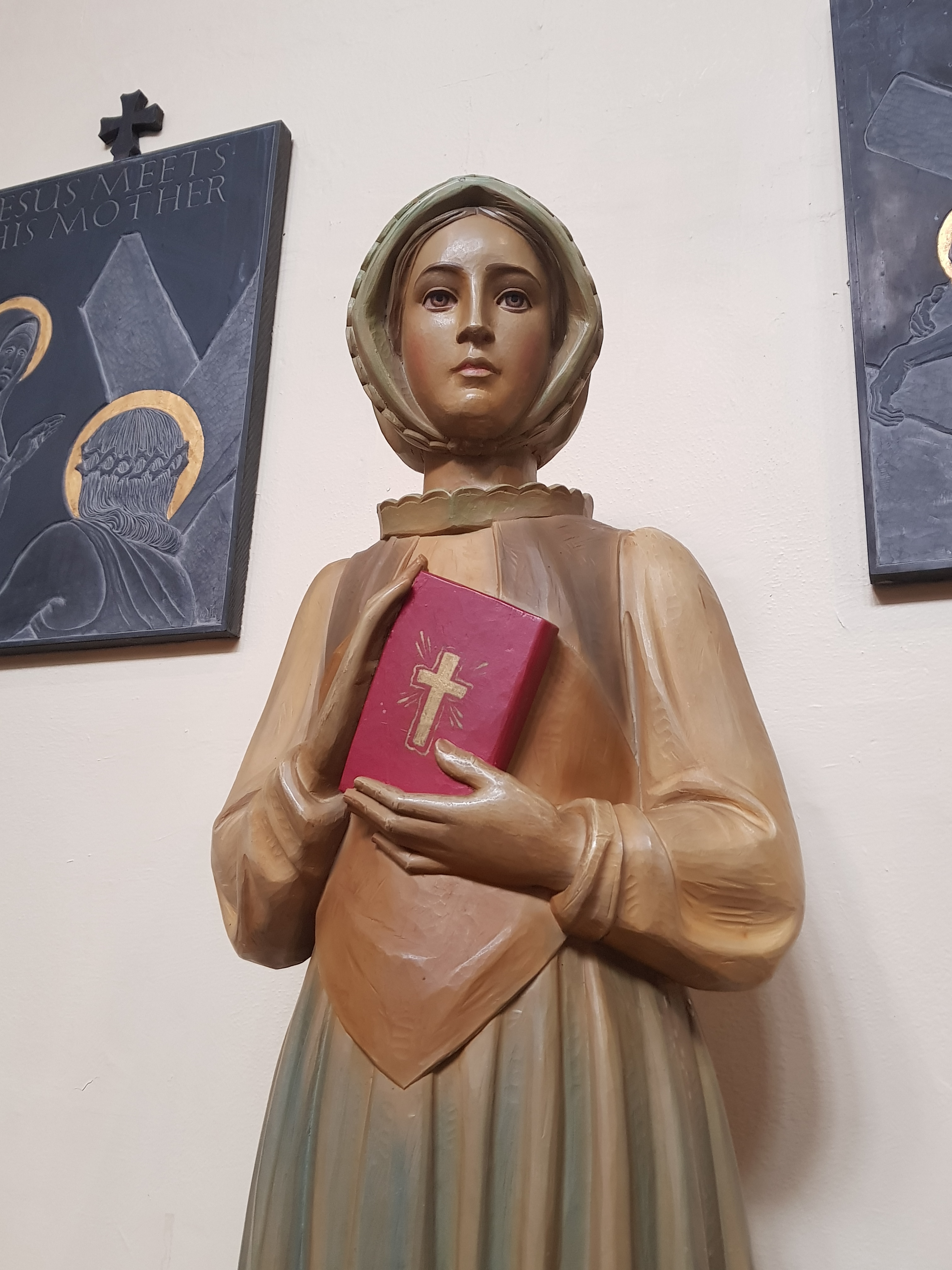 Religious change was an important cause of religious crime in the sixteenth and seventeenth centuries.

Margaret Clitherow is famous for being nicknamed the ‘pearl of York’ because she was martyred in York during the tumultuous period of the Reformation for religious crimes, one of only three women martyred by the Elizabethan state. But who was Margaret Clitherow and how did she find herself on the wrong side of the law? A lot of the information that we know about Margaret Clitherow’s story comes from an account written by her chaplain, John Mush, entitled ‘True Relation of the Life and Death of Mistress Margaret Clitherow’ which was compiled shortly after her death in 1586. Aside from a short, illustrated account from the Anglo-Dutch antiquary Richard Verstegan, Mush’s biography is our main source for Margaret Clitherow’s life.

Margaret Middleton (later Clitherow) was born in York in c.1552, the youngest of four children for Thomas (d.1567) and Jane Middleton (c. 1515-1585). Her father Thomas was a wax chandler who prepared and sold beeswax candles and he was also the church warden of St Martin’s church in Coney Street between 1555 and 1558. An important civic figure, he became a freeman of the city of York, giving him the full privileges and immunities of the city, and then became sheriff of York in 1564.

Being brought up in a family that was respected in Elizabethan society meant that as a teenager Margaret observed the Protestant faith, the newly established state religion of England. The religious shift from the traditional Catholic religion which had been the dominant faith across England to the newly formed state sanctioned Protestant religion caused a crisis of faith among the population. Whilst large numbers of people adapted, and even embraced Protestantism, there were still families and individuals who believed that the Catholicism of their ancestors was the one true faith.

The confusion concerning religious practice was increased by various changes to the laws surrounding religion implemented by a succession of different monarchs. Edward VI’s government strengthened the Protestant religious changes established by his father, Henry VIII. But Mary I reversed these changes and attempted to restore Catholicism in England during her reign. When Elizabeth I acceded the throne in 1558 she implemented what was known as the Elizabethan Settlement, a return to moderate Protestantism.

John Clitherow, a prosperous Protestant butcher who had become a freeman in 1560 and was elected a chamberlain in 1574, married Margaret in 1571. John was a well-respected civic figure and owned a shop on the butchers’ street, which is now one of York’s main tourist thoroughfares, the Shambles. Around this time Margaret had a lot of contact with Catholic neighbours such as Dorothy Vavasour, wife of a local physician, in her new parish of Holy Trinity, King’s Court. According to John Mush, Margaret gave some consideration to the new faith and after reflecting that she found no ‘substance, truth, nor Christian comfort’ in the Protestant ministers or even the doctrine itself, she had converted to Catholicism by about 1574. Those Catholics who refused to conform outwardly to the Protestant religion became known as recusants.

Margaret was a recusant and refused to attend Protestant church services. She also took on a key role locally in trying to preserve Catholic practices. Women were important for the survival of Catholicism in York. It was more difficult for men to be recusants because they were pressured to conform to the state religion in order to protect their businesses and civic offices. The Elizabethan Settlement establish penalties for non-conforming and Catholics who did not attend Protestant church services were fined for recusancy. The 1559 Injunctions had set the penalty for non -attendance of Protestant church services or recusancy at 12 pence. From 1576 Margaret’s husband John had to pay regular fines for her recusancy because Margaret refused to attend her parish church of Holy Trinity, King’s Court, although he remained a Protestant.