How did ordinary people gain justice in early modern York? The Cause Papers explained 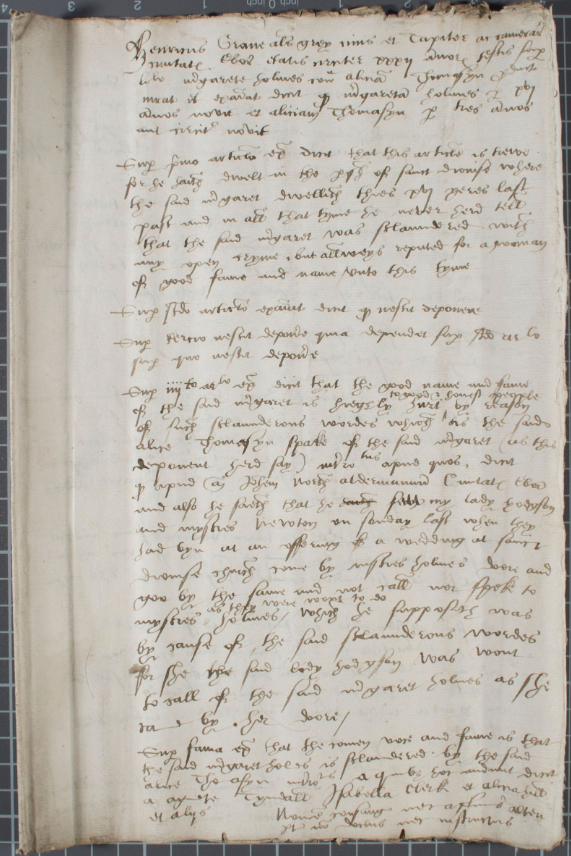 In the medieval and early modern periods, the Church courts had control over a wide variety of matters that affected the everyday lives of ordinary people, not only issues relating to church rights but moral cases relating to family life and romantic relationships, friendships and disputes within communities. This meant that many early modern people, even those of lowly status, would have had firsthand experience of the activities of the courts, either as plaintiffs (the individual who brought a case to a court of law) or defendants (the individual who was accused in a case), or even as witnesses providing testimonies in support of the plaintiff or defendant in disputes between people from their local communities.

The records of the courts, known as the cause papers, are the evidence files for individual legal cases or causes which were brought before the church courts, so they are the court copy of the files of material that record the setting out, disputation and resolution of each cause. Not all of the information survives for all of the causes, so in some cases we know that a charge was made but for many causes we do not know the outcome of the cause or whether any sentences were implemented. In addition, some causes would have been dropped in the middle of the proceedings for any number of reasons, perhaps a lack of funds to continuing pursuing the cause or perhaps a resolution was reached outside of court.

The courts heard two distinct types of cause. The majority of the causes were brought between two parties and were known as instance causes, sometimes private causes concerning a marriage or a defamation, but this also included causes brought by people in official capacities, such as churchwardens against parishioners. The other type of causes were those brought by the Church itself and these usually related to disciplinary matters concerning the clergy or church taxes.

There were many steps that could be involved in pursuing a cause through the Church courts and you can find more detail about the process via this Research Guide to Cause Papers. The process of a cause through the Church courts was lengthy but this reflects the amount of time that it took to prepare the cause and to write out the documents by hand. The vast numbers of documents produced through the process of each cause contain a wealth of information. To make this enormous body of material easier to understand the online database that was created by the Cause papers project, which we will explore in a later step, collected particular types of information from the documents. The date and subject of each cause paper are recorded, along with the parties involved and the names of all people and places mentioned in the cause. The causes are made up of a variety of different documents but only the most important documents are recorded by the project, the documents known as the libel, depositions and sentence.

In the early modern period, the libel was the document which formally initiated the cause and contained the plaintiff’s petition. The libel gave the names of the parties involved, the type of cause and a general outline of the points at issue, which could cover a number of different matters. The defendant was expected to make a formal response to the allegations.

The depositions were the testimonies of witnesses produced by both sides. The testimonies were taken outside of court, the witnesses were questioned individually and secretly. Sometimes several sets of depositions exist for one cause because there were different stages where it was felt appropriate to take further testimonies to further clarify particular issues which were raised. The depositions are particularly interesting because they give us a lot of personal information about the witness, sometimes more than we know about the defendants. We can find out their name, occupation, place of residence and a lot of incidental material about the witness and their community through the depositions.

The sentence gives the outcome of the cause, this is usually comparatively short and refers to the parties, the type of case, the judgement and the punishment given to the losing party. In Church courts, canonical correction usually took the form of public penance and some financial consolation in the sense that the losing party had to pay their own costs and the costs of the other side. Many causes do not have a sentence attached so it is not always possible to find out the outcome of a case. Nonetheless, all causes contain valuable information that helps to shed light on the people and communities of early modern York, their preoccupations and problems and the nature of crime at the time.

Share your thoughts with your fellow learners in the Comments