Examples of early modern causes from the city of York 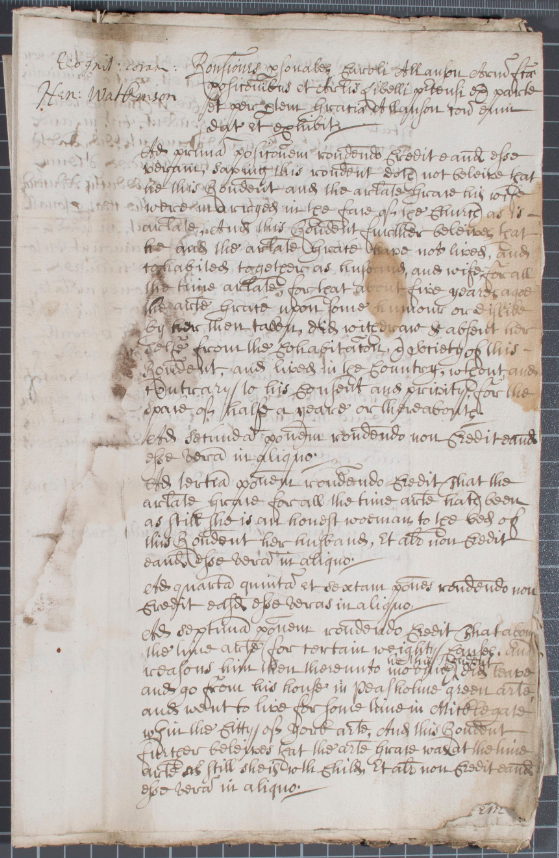 Below are summaries of causes from the York Church courts which can give us an idea about what types of actions and behaviours constituted crimes according to the Church.

Under English law, every individual was entitled to a good name. To undermine this in public, or even in private, was an offence against both secular and Church law. A good reputation in society in the sixteenth and seventeenth centuries was largely dependent upon financial solvency and sexual conformity. Three legal points had to be made in defamation cases. Firstly, the person being defamed should have been well respected in society before the offensive words were spoken. Secondly, the words used should have resulted in the loss of this reputation. The third point related to the circumstances of the defamation, the more people who heard the accusation, the greater the damage that could have been done.

Margaret Holmes, wife of William Holmes, the plaintiff, from the parish of St Denys, York, accused Alice Thomasyn, the defendant, of defaming her character by using sexual slander. Margaret produced witnesses who testified to Margaret’s honest character and claimed that the defamatory words allegedly spoken against her by Alice had damaged her reputation. Other witnesses also alleged that they had heard Alice defame Margaret by questioning her sexual integrity and calling her a priest’s whore, near to the church of St Denys in York. The outcome of the cause is unknown.

The majority of causes relating to immorality indicate some form of sexual misconduct. The causes were often brought to reinforce Christian teaching about marriage and adultery. It was also considered important to control bastardy (the fathering of a child with someone one is not married to) because the parish was the main provider of relief for the poor in the post-Reformation period. Some causes illustrate new crimes brought about as a result of political and religious changes. As we have seen previously, by the later stages of the sixteenth century, adherence to Catholic religious practices was punishable by fines and imprisonment and hiding Catholic priests was punishable by death.

William Langdale, the plaintiff, accused Richard Will, a yeoman, the defendant, of committing fornication and adultery and having a child with a woman who was not his wife. William also claimed that Richard favoured the Catholic religion, frequently absented himself from church and lodged various seminary priests and other Catholics in his house, including one priest who had escaped from York Castle. Richard admitted that he had committed adultery and fathered an illegitimate child but claimed that he had already been punished in the consistory courts for that offence and contributed to the upbringing of the child. He denied that he favoured the Catholic religion and denied knowing or lodging any Catholics in his house. The outcome of the cause is unknown.

The Church Courts held the monopoly on marriage litigation until the nineteenth century. Most matrimonial causes concern the making and fulfilling of marriage contracts, separation and annulment of contracts and the restitution of conjugal rights. Marriage was seen as a legally binding contract and separation was seen as a temporary suspension of matrimony for an unlimited period with the hope that the partners would be reconciled. Acceptable grounds for separation included adultery, impotence, cruelty, infidelity and the relief of unnatural practices. Cruelty could be defined a situation where it was unsafe for a wife to continue in her conjugal duties.

Cause type: Matrimonial (separation from bed & board – cruelty)

Grace Allenson, the plaintiff, sued her husband Charles Allenson, esquire, of the parish of St Saviour, York, for separation on the grounds of cruelty. Grace alleged that throughout their married life he had verbally abused her, cursed her, threatened her, and called her ‘filthy and opprobrious names’. She enumerated the occasions when he beat her black with bruises, kicked her from one chamber to another, and threw her headlong down the stairs at their home in Peasholme Green, York. She accused Charles of turning her out of their home and refusing to support her and their children. Charles denied abusing her and set out to counter Grace’s image of herself as a model wife by describing her as disobedient, aggressive, and violent. Many witnesses, including former domestic servants to the Allensons, portrayed Grace as a virtuous wife and mother, the victim of Charles’s irrational fury. The court delivered sentence in favour of Grace’s separation from Charles in December 1676 and ordered him to pay her costs.