What does the archaeology look like in the basalt landscape?

In this section we learn about the archaeology that we find within in the basaltic landscape.

Are you excited to learn more about the archaeology that we can find in this basaltic landscape? Let’s explore that here!

The archaeological remains in the Homs basalt include various features that are rarely found in areas where mudbrick construction is the norm. For example, there are many thousands of stone-built burial cairns or tumuli (Figures 1–5). A high density of these – as many as 200 per km2! – can be detected not only on the ground, but also using remote sensing. Cairns are not evenly distributed, with some clustered around seasonal lakes, and others forming groups along the tops of the higher ground. They are less common in valley bottoms.

Why do you think we find fewer cairns in valley bottoms? Are they buried by the build-up of valley-bottom sediments? Have they been removed by successive phases of farming? Or were they rarely placed in the valley bottoms by those that built them?

We also find a number of stone enclosures, often circular in shape (Figure 6). Some of these may have been connected with animal herding. 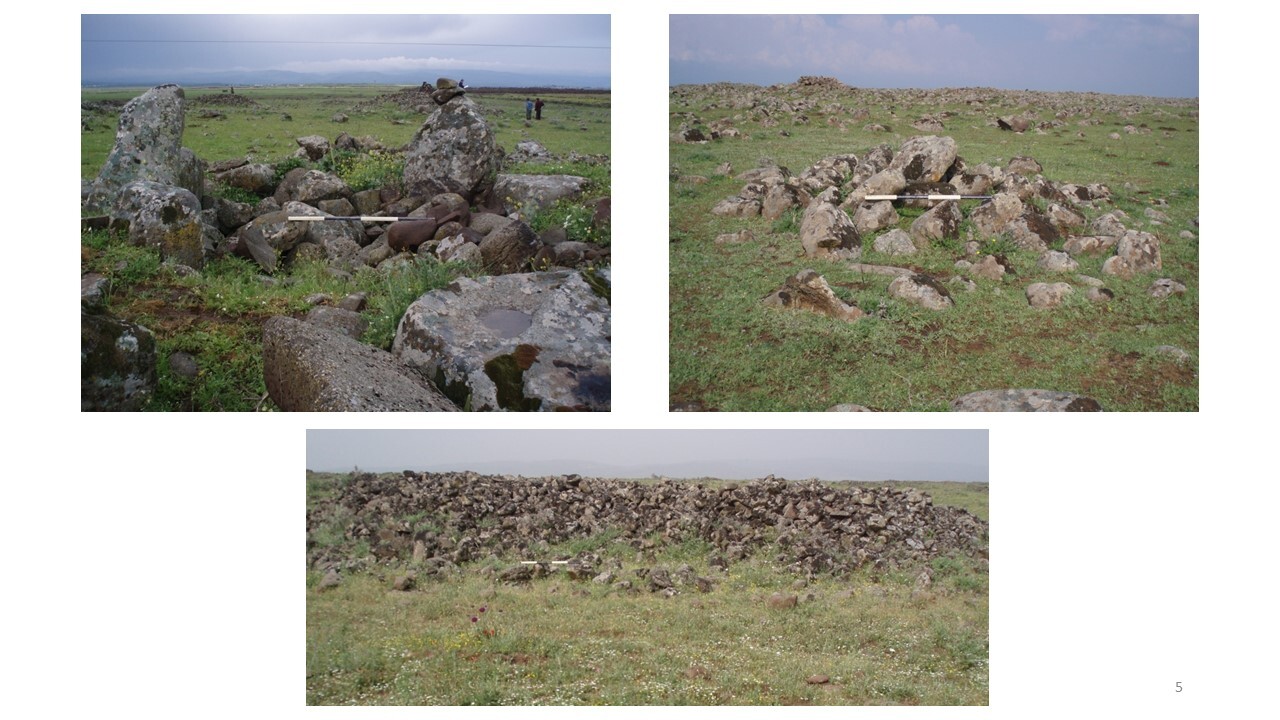 Figure 1: Examples of different forms of cairns as seen from the ground. Image courtesy of Graham Philip.(Click to expand) 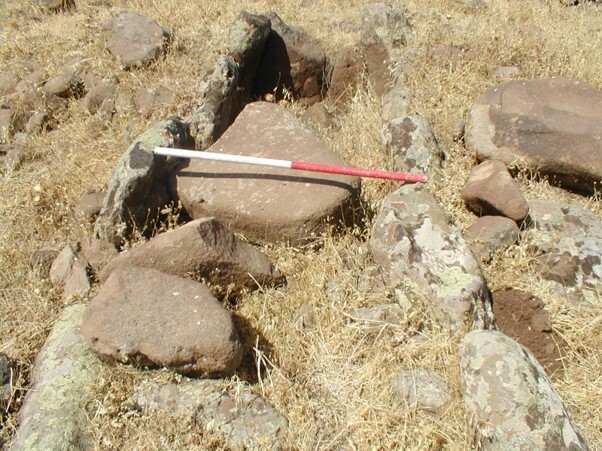 Figure 2: Close up view of a cairn seen from the ground. Image courtesy of Graham Philip. 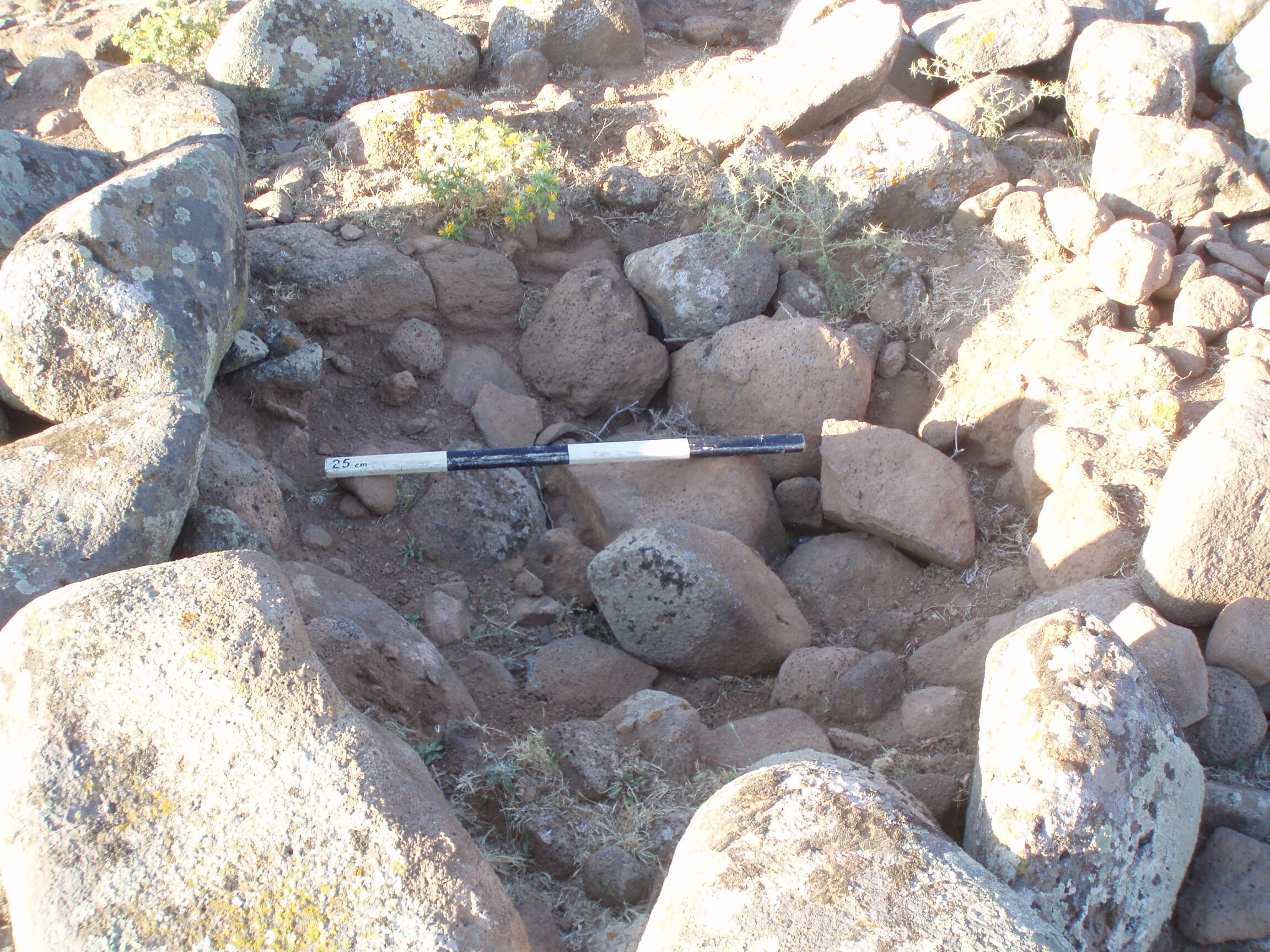 Figure 3: Close up view of a looted cairn seen from the ground. Image courtesy of Jennie Bradbury. 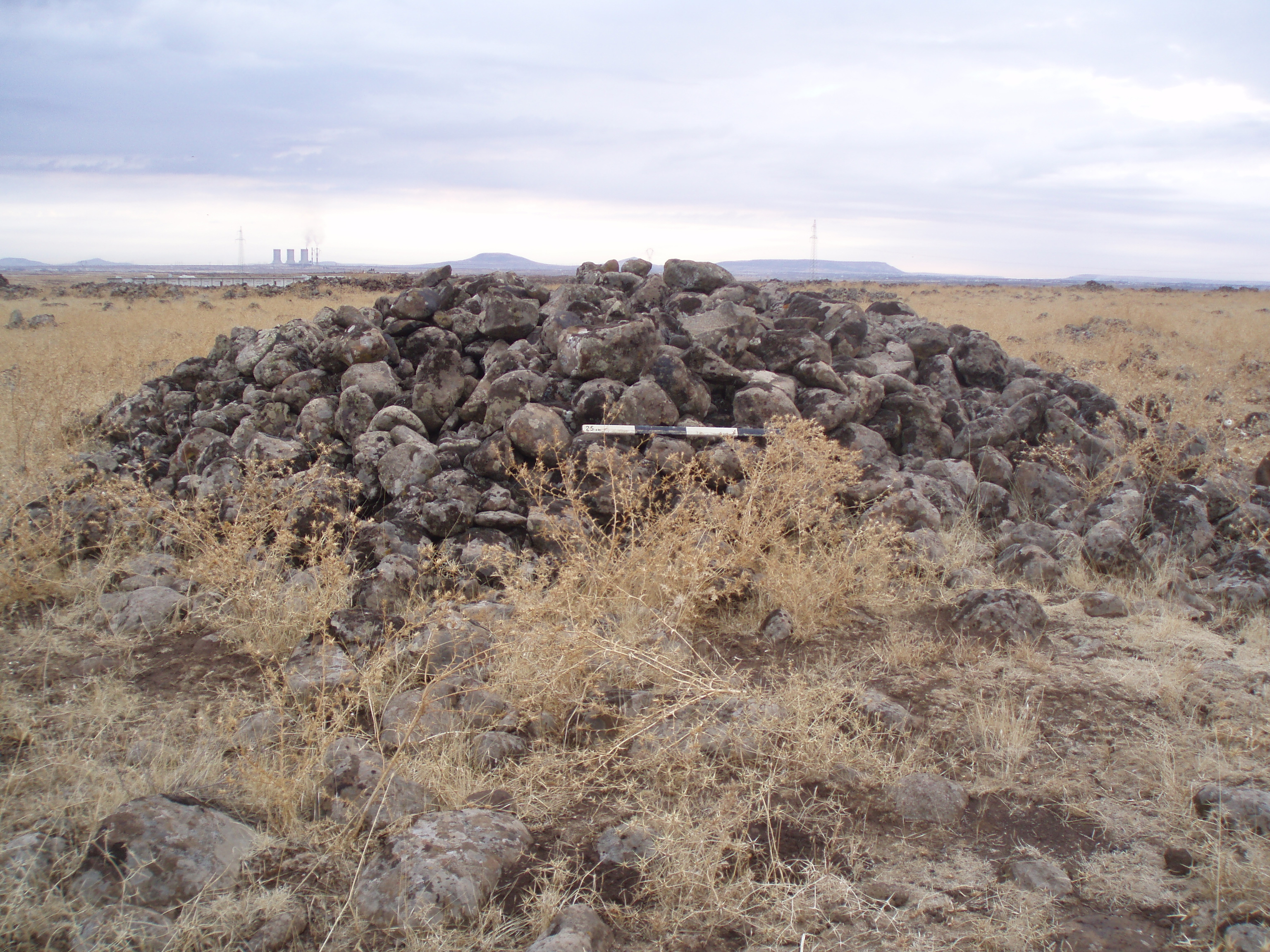 Figure 4: Close up view of a cairn seen from the ground. Image courtesy of Jennie Bradbury. 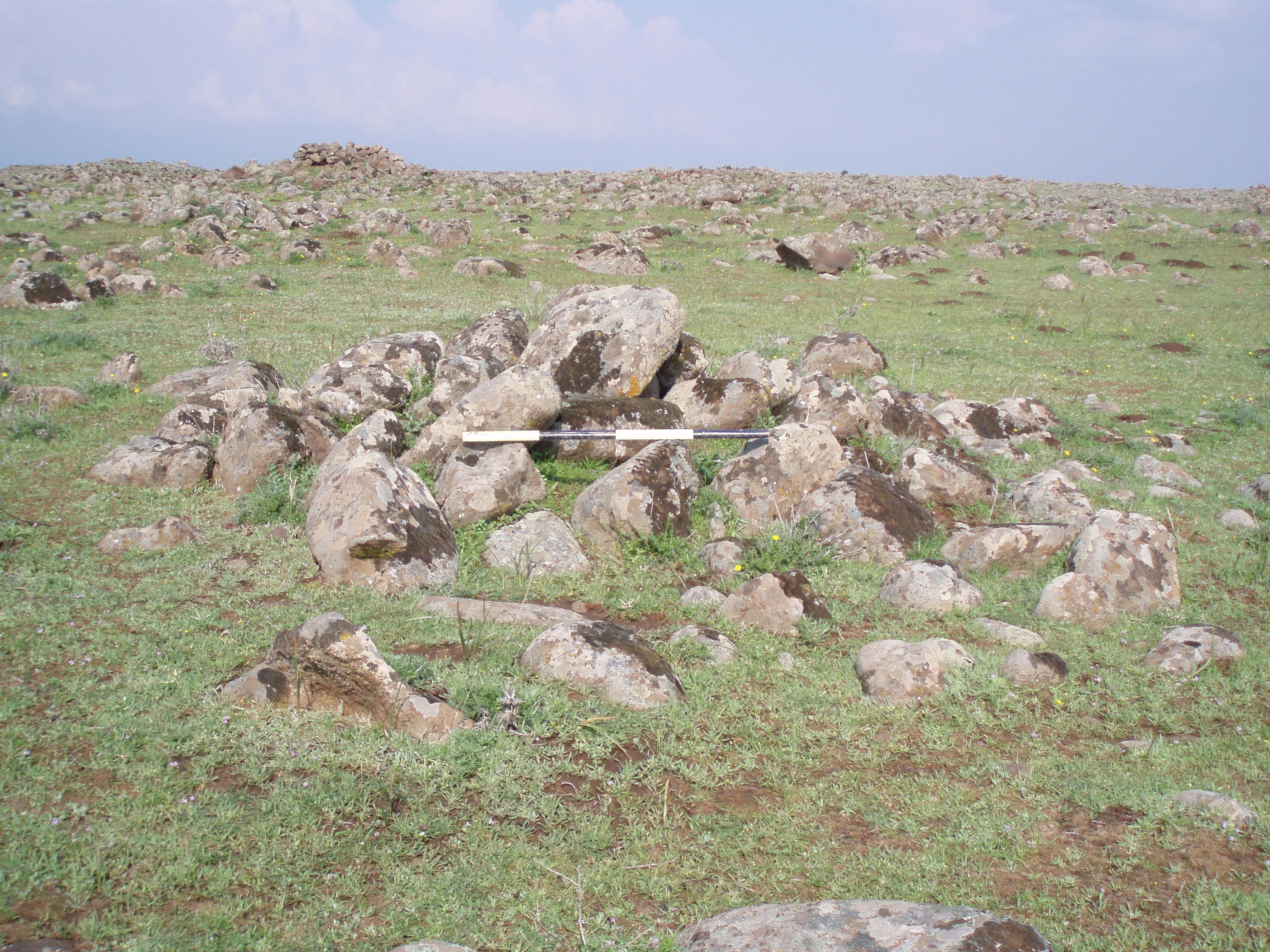 Figure 5: A cairn seen from the ground, in an boulder field where multiple cairns can be seen to be clustered. Image courtesy of Jennie Bradbury. 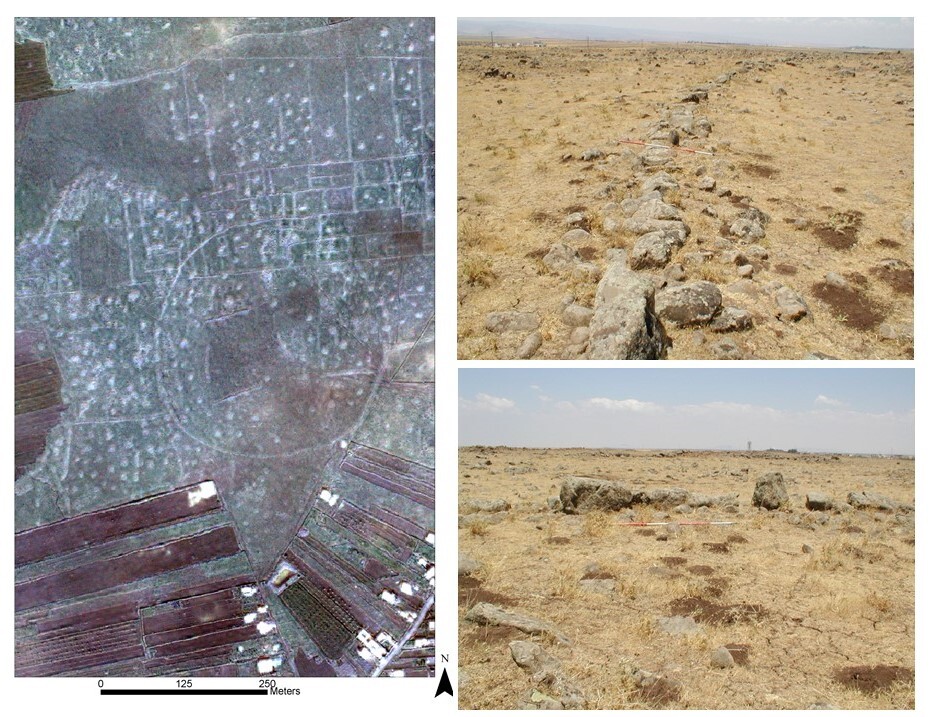 Figure 6: Satellite image showing a circular enclosure set within a modern agricultural landscape, along with two sections of the structure’s boundary viewed from the ground. Ground photography courtesy of Graham Philip; satellite image: Landsat 7 courtesy of the USGS.(Click to expand)

Apart from the cairns, another very visible feature is the presence of lots of low stone walls. These are field boundaries. Some of the older walls may represent the remans of centuriation, a type of large-scale land division that took place when the region was under Roman control. The large units created in Roman times have subsequently been sub-divided into smaller fields using additional walls but are still clearly visible in the wall lay-outs (Figure 7). 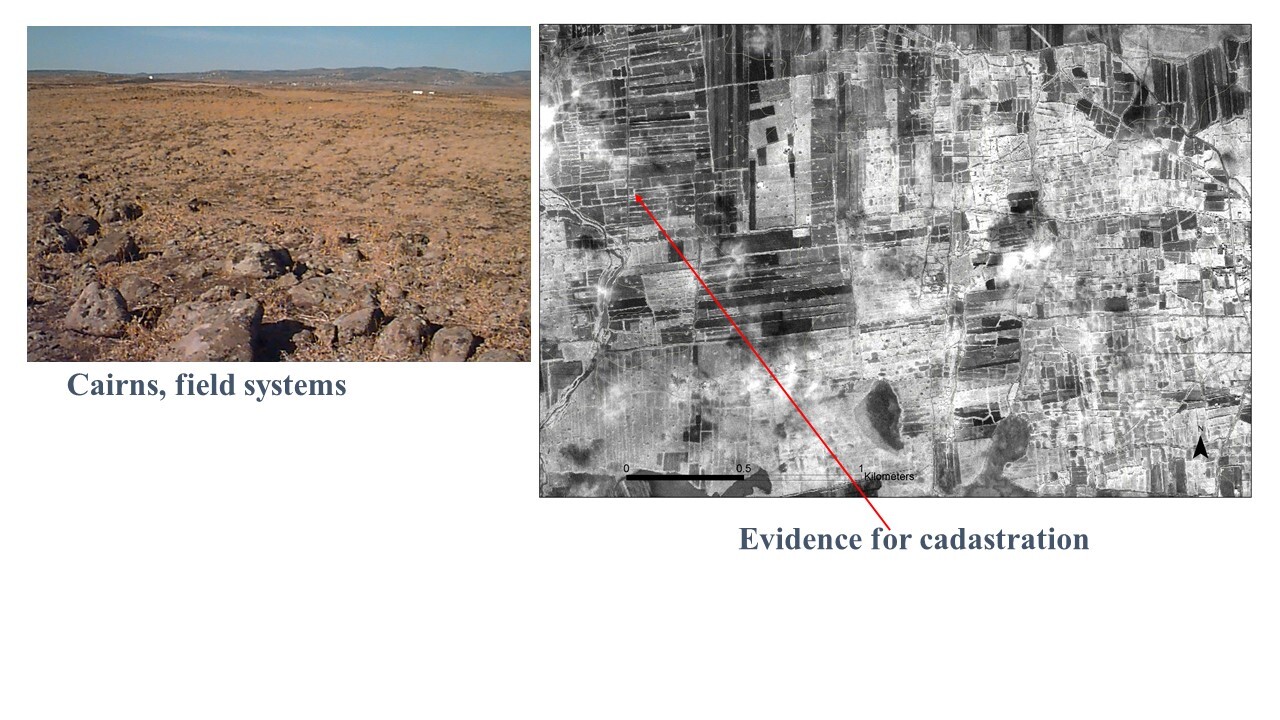 Figure 7: An example of cadastration in the basalt zone, with a stone field boundary wall seen from the ground (right) and showing its location in satellite imagery (left). Ground photography courtesy of Graham Philip; satellite image: CORONA image courtesy of the USGS. (Click to expand)

How can satellite remote sensing help in such a landscape context? For a start, it can provide a map base, a lot of useful environmental information and an essential navigation tool for fieldwork; this can be a difficult landscape in which to finds one’s bearings! These in turn facilitate preparatory desk-based analysis, making field-survey more efficient. By identifying and mapping particular shapes and sizes of fields, we can see patterns in the lay-out of the landscape, such as the relic centuriation discussed above.

Ultimately this can help in the identification of previously under-represented categories of archaeological remains, for example, ploughed out Roman and Islamic period sites in the marl and cairns, field systems, and upland settlements in stony regions.