Article 1: Ideal landscapes and where they come from? 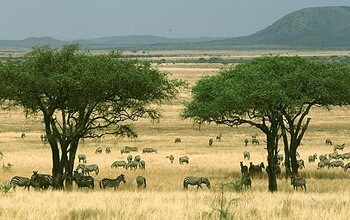 Researchers have found that when people of different cultures, including those of North America, Europe, Asia and Africa, are given freedom to choose the setting of their homes and work places, they prefer an environment that combines three features:

1) They wish to live on a height, such as on the side of a hill, looking down and over the land below.

2) They like to scan a parkland with scattered trees and copses spread before them, closer in appearance to a savanna than either a grassland or a forest.

People who have enough money will pay a very high price to get a house or work place that has these 3 features.

There is more. People prefer their houses to be a retreat, with a wall, cliff, or something else solid behind it. They want a view of fertile land in front of the retreat. They like to see large animals on the land below their house, either wild or domestic. Finally, they like trees with low horizontal branches and divided leaves. It is probably not a coincidence that some people, I among them, consider the Japanese Maple the world’s most beautiful tree.

Our distant ancestors wanted to be hidden in copses looking out over a savanna…, scanning the land for animals to hunt, dead animals to scavenge, edible plants to collect, and enemies to avoid. The purpose of a body of water nearby was a territorial boundary and a place to catch fish.

In general, people know they have instincts that make them like and dislike things, but they do not often think about why. I once had dinner in New York at the house of the late Gerard Piel, a distinguished writer, publisher, and the founder of academic journal Scientific American. He did not agree with the savanna hypothesis.

So it gave me a lot of pleasure to walk out with him on to the balcony of his apartment, which had rows of shrubs in pots, and look down with him more than 12 storeys to the woodland, savanna, and reservoir lake of Central Park. I wondered how much that view added to the cost of his apartment – thanks to the instincts we got from our prehistoric African ancestors.