We begin this learning journey with one of the most crucial issues of our time: climate change. And before we can begin to understand our present predicament, we need to take a few big steps back in time.
© Università degli Studi di Padova

We begin this piece with one of the most crucial issues of our time: climate change. And before we can begin to understand our present predicament, we need to take a few big steps back in time. The end of the Roman Empire was a time of great crisis and a major contributor to the shifting historical landscape was climate change.

The history of climate change

Environmental history investigates the relationship between humans and the ecosystem through various lines of study, including agricultural practices, technological innovation and sources of energy. The primary concern of environmental historians is to draw attention to the central role that the environment has played in human societies:

How has the environment shaped human decisions and actions?

People not only use the environment around them – they create it, which is why it is fundamental to understand how they do so, whether they mean to or not.
The study of climate changes in history is not entirely new, but it accelerated in the 1960s. Two figures were pivotal in alerting historians to the possibilities of climate for studying historical change. In Britain, the climatologist Hubert Horace Lamb (1913–1997) evaluated scattered anecdotes of weather events recorded in historical records, thereby demonstrating his deep understanding of climate patterns and opening the eyes of many scholars to climate’s historical potential. In France, Fernand Braudel (1902–1985) and the Annales school extended the historian’s remit to include the natural environment along with long-lived economic and cultural structures of Mediterranean history.

The explosive growth of scientific and technological innovation from the 1960s and 1970s accelerated modern climate science. Satellite-based instrumentation exponentially increased the quantity, quality, and geographical scope of measurements pertaining to ongoing climate phenomena. New measurements have signaled unexpected phenomena in the present and recent past.

Thus began the hunt for “proxy” measures, natural archives generated by natural phenomena that could be understood to preserve some kind of climate signal.

Tree rings were one of earliest proxy sources, and they remain one of the most powerful. Dendrochronology is the most exact of all dating methods, because a precise year can be identified for each tree ring, and verified by visually and statistically comparing ring width patterns between trees (known as cross-dating). Tree ring width allows robust proxy reconstructions of precipitation and temperature for some areas with an absolute dating as far back as 2,500 years. 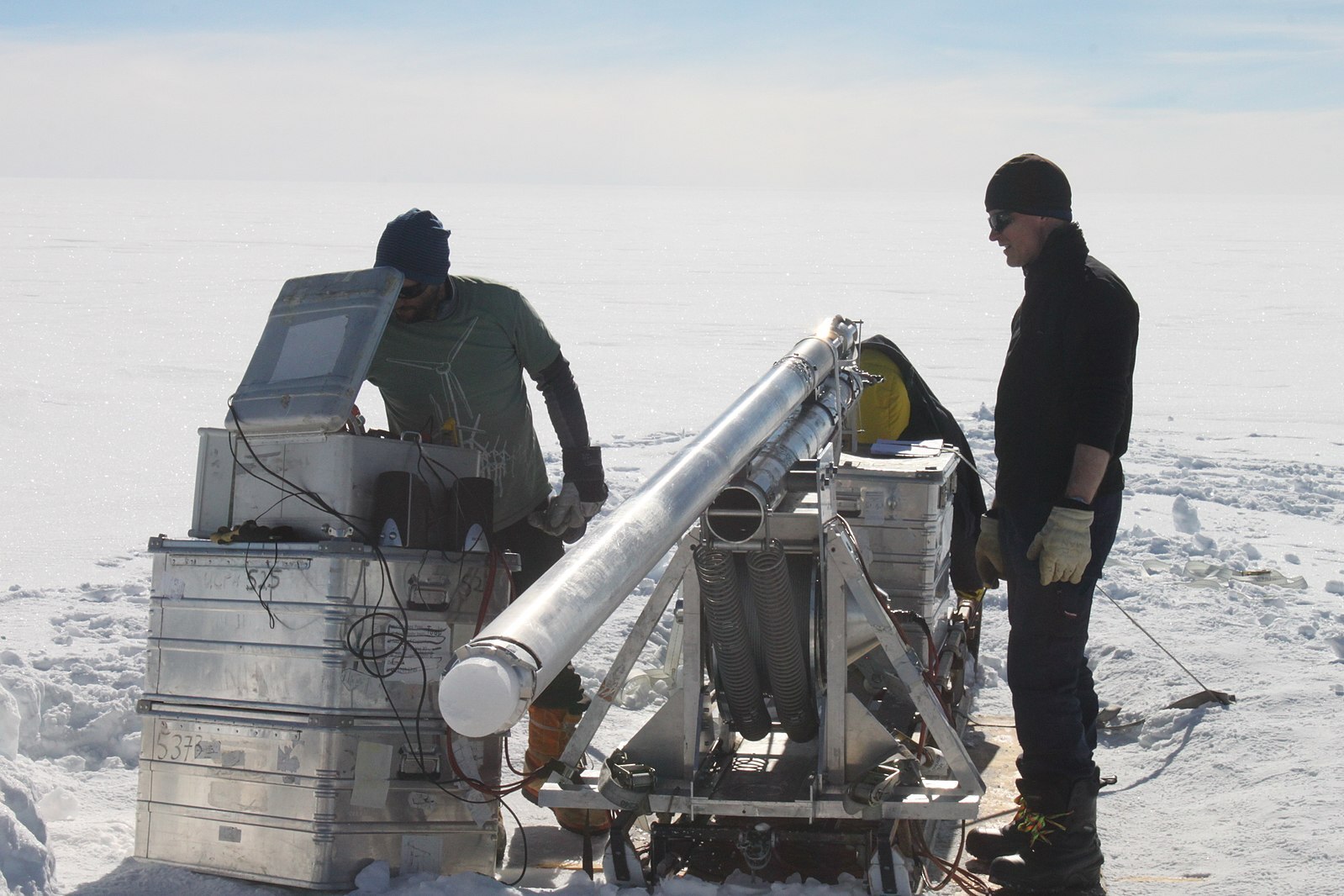 Ice core section from TUNU (Greenland)
Ice cores drilled in glaciers capture the atmospheric chemistry trapped in snow that fell and transformed into ice. They offer an exceptionally wide spectrum of proxy indicators of ancient environments, including volcanic activity, temperatures, movements of air masses, and atmospheric deposition of anthropogenic pollutants such as lead. 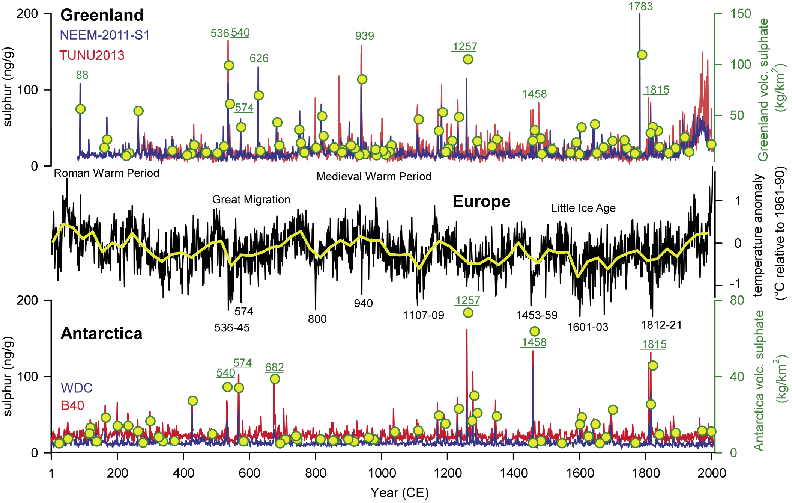 Ice-core records of sulfur from two ice cores in Greenland and two ice cores in Antarctica, used among others to infer atmospheric deposition (yellow circles)
The best samples of ice cores can display resolutions which can be correlated with geological (volcanic eruptions) or historical events—sometimes down to the exact year or season.

Speleothems – limestone cave deposits, typically stalagmites, arising from groundwater percolation form in patterns that can be annual or even sub-annual. 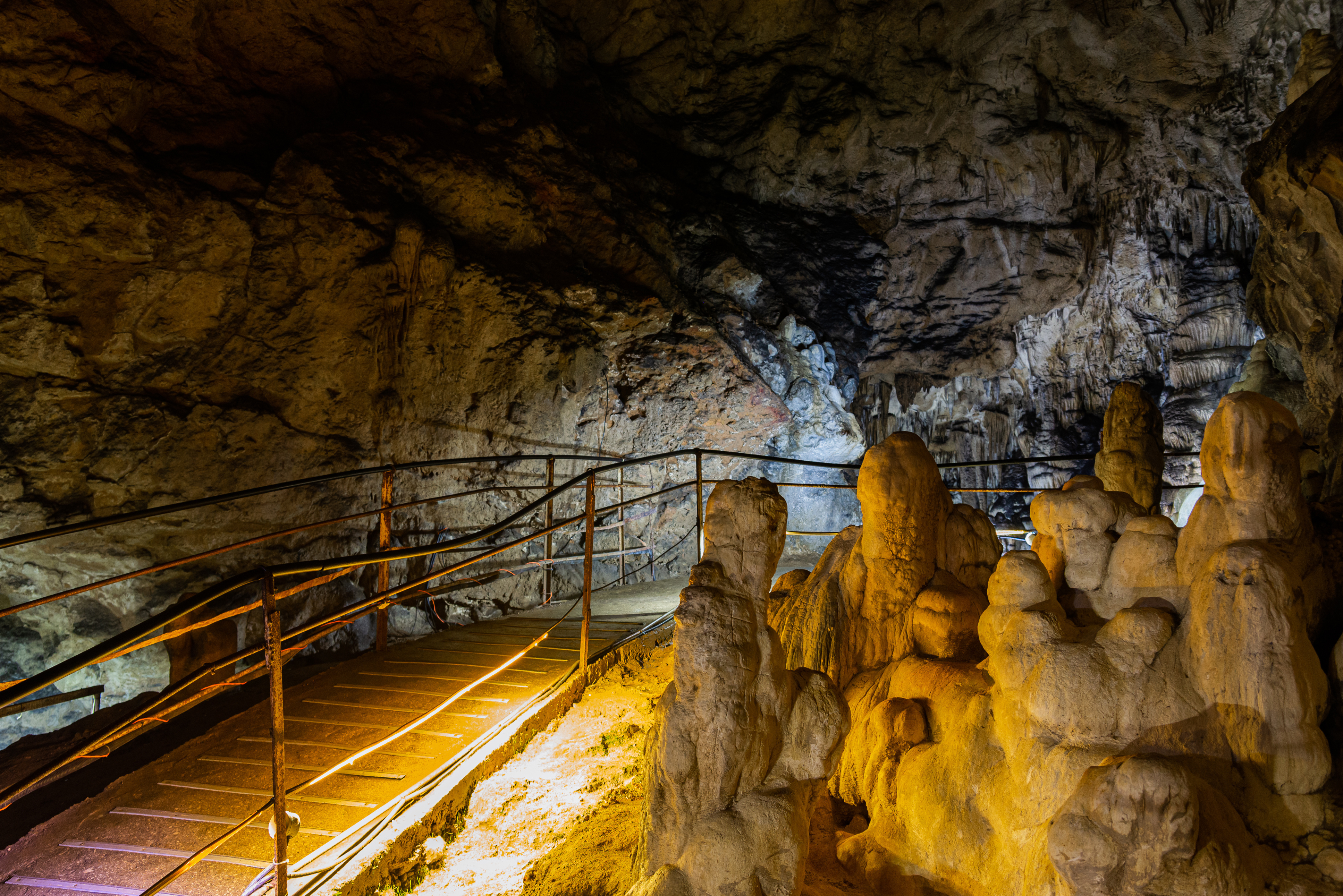 Azish or Azishskaya cave in Adigeya, Russia
They are capable of providing insight into precipitation and temperature through the isotopic ratios of key elements and are datable through such advanced techniques as uranium–thorium dating.

Sedimentary deposits on lake bottoms are sometimes annually sealed (varves), preserving various atmospherically transported deposits. Fossilized pollen trapped there yields information about, among other things, plant spectra. As a sensitive indicator of the human impact on a botanical community at a given time, they can reveal, for example, the expansion or contraction of woodland in relation to cultivation or changing preferences in cultivated plants. Pollen spectra, however, typically register only changes in temperature and precipitation that are dramatic enough to alter the plant community.

Lastly (but not least!), written sources can provide valuable information about climatic phenomena that historians can analyse and integrate with the scientific data.

The integration of archaeological evidence with historical sources and scientific measurements is helping explain many aspects of ancient and medieval times.

In relation to the post-classical period, a time of profound change, we must investigate to what degree important climatic variations (which started in the third century) influenced the collapse of the Western Roman Empire and helped shape the medieval landscape, and how humans reacted, adapting or modifying the environment in turn.