The fourteenth century began a new intellectual era, the Renaissance, or Rebirth.

In addition to its other turmoils, the fourteenth century saw the beginning of a new intellectual era, the Renaissance, or Rebirth.

The Renaissance began in the comparatively large city states of Northern Italy which, as we’ll see next week, played a key role in Europe’s trade with the Middle East. In the medieval period, scholarly learning was mostly pursued by the clergy, and mainly focused on religious topics.

However, wealth from trade with the Mediterranean and with Europe produced a population of educated, well to do secular individuals who began to invest in new forms of learning and scholarship. They asked questions about how to live a good life, and how to be a productive citizen of one’s city, and for answers they looked beyond the church fathers to the pagan Greek scholars who, like the North Italians, had also lived in independent city states, and who had grappled with much the same questions. While medieval Christians looked upon humanity as limited by sin and improvable only through God’s mercy, the scholars of the Renaissance believed in self-improvement through education. That is not to say that the Renaissance scholars were not also religious. They were deeply committed Christians. However, they had a more positive view of the possibilities for human reform, and they aspired to recover the lost knowledge and skills of the Romans and Greeks, in the form of art, architecture and learning.

The Plague, which might have been expected to have disrupted this intellectual revival, instead reinforced this interest. While the plague had a devastating impact on urban life, well-connected survivors of the plague inherited the wealth of their deceased relatives, giving them a larger disposable income to invest in artistic or scholarly pursuits. The sense of their own mortality encouraged them to invest in the fine things in life, and to immortalise themselves through works of art. Perhaps the best example is the Adoration of the Magi by Botticelli (1475). Here we see an image from Christ’s nativity, but the figures painted are key members of the Medici family that governed Florence (and commissioned the artwork): head of the family Cosimo de’ Medici, his sons Piero and Giovanni, and grandsons Giuliano and Lorenzo. 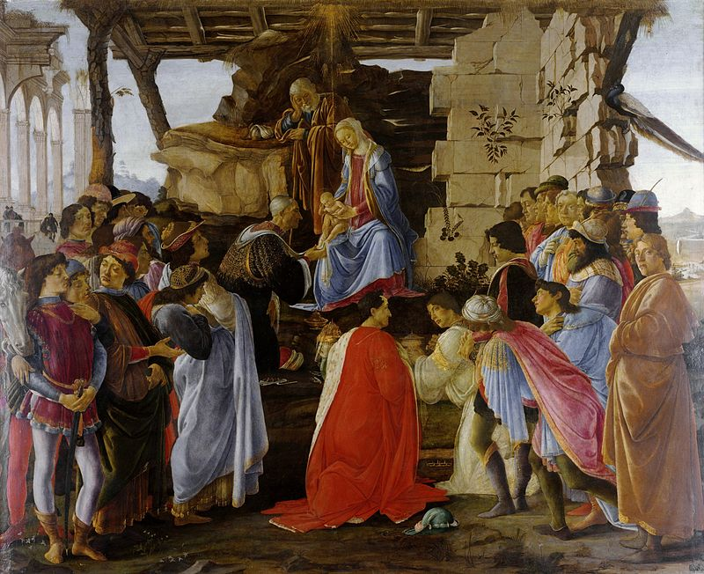 The Adoration of the Magi (1475), Botticelli © Wikimedia Commons 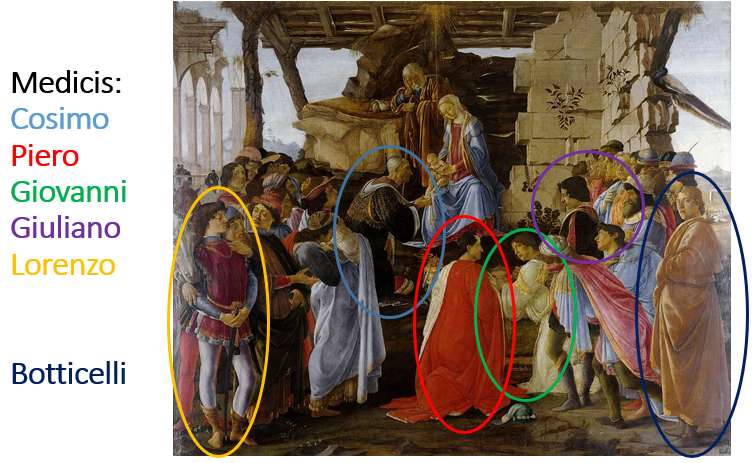 The Adoration of the Magi (1475), Botticelli with the Medici family highlighted © Sacha Davis/Wikimedia Commons

It was Lorenzo who commissioned the art—he effectively ruled Florence at the time. Art not only immortalised the patrons, but also the artists. Botticelli included himself on the right of the painting. Finally, of course, in uncertain economic times, fine objects of art also seemed a good financial investment—another motive for patronising Renaissance artists.

As Renaissance scholars began to correct the ancient Greek works, they began to look to the possibility not only of equalling them but also of improving upon and exceeding classical thought. The Renaissance laid the foundations for the Scientific Revolution of the sixteenth century, the eighteenth century Enlightenment, and ultimately the industrial revolution, leading ultimately to Western domination of the globe.