Let's look at a more complicated example, (‐)‐citronellol (C10H20O), which has a fresh, floral and clean rose smell and is used in perfumes and insect repellents. From the skeletal structure we can see that (‐)‐citronellol contains both alkene and primary alcohol functional groups. All the carbon atoms have a tetrahedral shape apart from the two carbon atoms in the carbon‐carbon double bond, which, like an aldehyde, are trigonal planar, or flat. 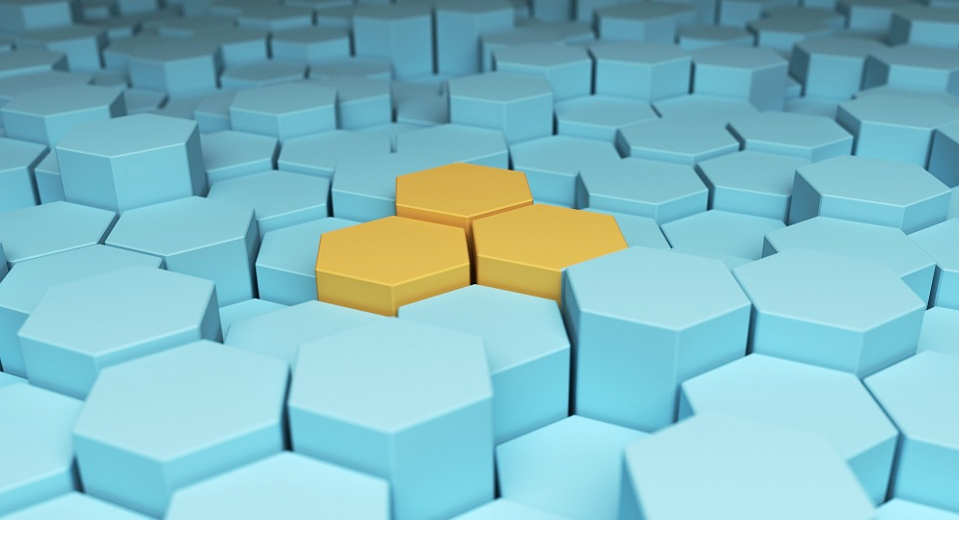 Let’s look at a more complicated example, (‐)‐citronellol (C10H20O), which has a fresh, floral and clean rose smell and is used in perfumes and insect repellents. From the skeletal structure we can see that (‐)‐citronellol contains both alkene and primary alcohol functional groups. All the carbon atoms have a tetrahedral shape apart from the two carbon atoms in the carbon‐carbon double bond, which, like an aldehyde, are trigonal planar, or flat.

It is also interesting to look at the methyl group bonded to the tetrahedral carbon at position 3 of the carbon chain. You will see it is pointing towards us. The carbon atom at position 3 is distinctive because it is the only carbon bonded to four different groups – we call this an asymmetric or chiral centre.

Interestingly, there are two possible ways of arranging the four different groups at a chiral centre.

The use of (+) and (‐) indicates that they rotate a special form of light, called plane‐polarized light, in different directions. Often R or S, in brackets, is also included at the start of a name to indicate how the groups are arranged around a chiral centre – assignment of R or S is taught in our first year degree course.

If you spin around (R)‐(+)‐citronellol and compare this to (S)‐(‐)‐citronellol you will see that they are non‐identical mirror images – the mirror images cannot be arranged in space so that all of the atoms in both structures overlap – we say they are non‐superimposable and we call them enantiomers (also known as optical isomers).

This can be tricky to visualise, so, to help, let’s think of our hands. Hands are chiral – a left hand is a mirror image of a right hand. Left and right hands are not superimposable – when placed side by side the fingers and thumbs point in opposite directions. This is just the same for (S)‐(‐)‐citronellol and (R)‐(+)‐citronellol, where the methyl groups point in opposite directions.

The different biological properties of enantiomers are important for the pharmaceutical industry. For example, one enantiomer (the S isomer) of penicillamine (C5H11NO2S) is a potent anti-arthritic agent, but the other enantiomer (the R isomer) is highly toxic. Perhaps the most high-profile and startling example of the difference in activity between enantiomers is thalidomide (C13H10N2O4). In the 1950s and early 1960s, this drug was seen as a remedy for treating morning sickness in pregnant women, and indeed one enantiomer (the R isomer) reliably had this effect. Unfortunately, the other enantiomer (the S isomer), has been associated with severe birth defects. Despite its chequered history, you may have read that thalidomide is being investigated as a potential COVID-19 treatment. Evidence shows thalidomide may protect the lungs by reducing the body’s inflammatory response, preventing damage of lung tissues and controlling the immune system.

Fans of french fries might like to know that the molecules responsible for the flavour (from potatoes deep-fried in beef tallow-hydrogenated vegetable oil mixtures) arise from carboxylic acids. This includes 2-methylbutanoic acid, CH3CH2CH(CH3)CO2H – interestingly, whereas the S isomer smells sweet/fruity, the R isomer has a cheesy/sweaty aroma! Similarly, in mushrooms, the major odourant is 1-octen-3-ol, CH3(CH2)4CH(OH)CH=CH2, or ‘mushroom alcohol’. Whereas the R isomer exhibits the aroma of fresh mushrooms, the S isomer has a musty, grassy aroma. So, not surprisingly, mushrooms produce predominantly the R enantiomer. This is another example of how different enantiomers can interact differently with our bodies. Food for thought…

If you would like to learn more about enantiomers you may find this YouTube clip of use.

Imagine I drew a single enantiomer of citronellol and asked you to determine which enantiomer it is. Unless you memorised whether it was (+) or (-) how could you work it out? Without using a polarimeter to measure the angle of rotation of plane polarised light, you could not. What you need is a naming system that allows you to work out what enantiomer it is just by looking at the structure, and which also allows you to draw the correct structure of the enantiomer simply from its name. This is what the R and S system (sometimes called CIP nomenclature) allows. This system ranks the four atoms or groups bonded to a chiral carbon atom – from this, you can assign the enantiomer as R or S. The R and S system is not related to the (+) or (-) sign of the optical rotation. For example, let’s look at two amino acids, serine and tyrosine. Whereas (S)-serine has a positive optical rotation, (S)-tyrosine has a negative value.

Don’t worry if you don’t feel completely comfortable with all the terminology in this step, which is a challenging one. To spot chiral centres, look at the groups bonded to each carbon atom – if a carbon is bonded to four different groups it is a chiral centre. To help identify and compare the groups, it may be useful to draw out all of the bonds and atoms. You can check out our pictorial glossary to help familiarise yourself with the concepts and for new examples that might make everything a bit clearer.