The peels are usually disposed of by burning, producing carbon dioxide and other greenhouse gases, or dumping into landfills, where the waste from rotting peels percolates into the soil, harming plant life. This includes the orange peel or rind, which on extraction, gives an oil that typically contains more than 90% of an organic compound called limonene.

Orange juice, made by squeezing fresh oranges, is enjoyed by millions of us across the world every day. With so much orange juice being prepared, unfortunately, this leaves behind a lot of waste ‐ for every orange that’s squeezed to make juice, about half of it is wasted. It is estimated that around 20 million tonnes of citrus are wasted each year.

The peels are usually disposed of by burning, producing carbon dioxide and other greenhouse gases, or dumping into landfills, where the waste from rotting peels percolates into the soil, harming plant life. This includes the orange peel or rind, which on extraction, gives an oil that typically contains more than 90% of an organic compound called limonene.

Limonene (C10H16) comprises a 6‐membered ring and two C=C double bonds. It has one chiral centre (labelled with a red star below) – the four groups around the chiral centre can be arranged differently to give either (+)‐ or (‐)‐limonene, which have very different smells. This is a beautiful example of how different enantiomers, with different shapes, fit into different receptors in the nose. 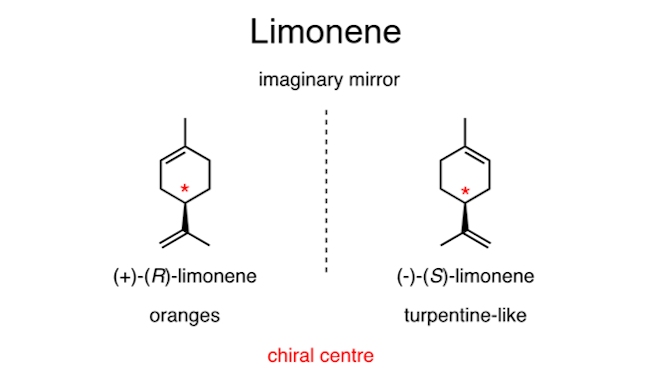 Unsurprisingly, based on their smells, it is the (+) form of limonene that is found in orange peel. The (+) form of limonene has many uses, including as an insecticide, a cleaner (as it is a good solvent), and an additive in the food industry. Its light, fresh and sweet citrus odour also ensures it is an importance fragrance found in various cosmetics and perfumes, from soaps to fabric conditioners, scented candles, air fresheners and cologne.

Indeed, a study of perfumed cosmetic and household products available on the shelves of UK retailers in 2006 showed limonene was the top most frequently labelled fragrance, along with a compound called linalool. Linalool has a similar structure to limonene. Both enantiomers of linalool are found in nature and they also have different smells. 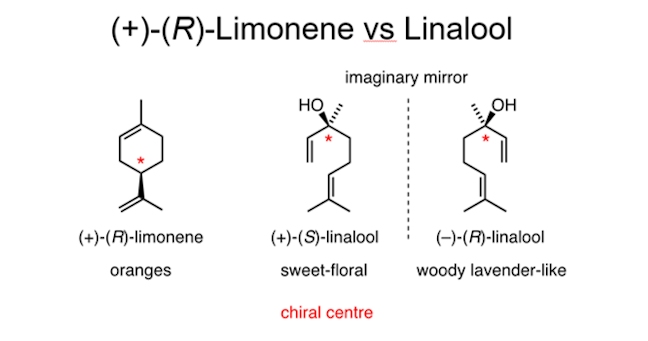 So, today, limonene and linalool are probably the fragrances most‐frequently encountered by people living in the UK. With so many uses of (+)‐limonene and with so much of it going to waste when making orange juice, it is perhaps not surprising that chemists have explored ways to extract it from the orange peel. This includes using steam distillation.

At York, our Green Chemistry Centre of Excellence has developed a novel approach, which uses microwaves. We know that molecules undergo excitation with electromagnetic radiation, and this effect is used in household microwave ovens to heat up food. However, chemists are now using microwaves to promote chemical reactions.

At York, the technique relies on using high‐powered microwaves to break down the tough cellulose molecules within the orange peel. This allows the release of low-boiling organic compounds, like (+)‐limonene, that can be collected and cooled into a liquid product. Compared to conventional methods, like steam distillation, the process is much faster, less energy intensive and produces (+)‐limonene in double the yield. Excellent news indeed! It is also worth noting that orange peel can be converted into the fuel biogas (a mixture of gases, including methane) by the action of microorganisms (anaerobic digestion), but only after (+)–limonene has been removed as it is an antimicrobial agent.

Large‐scale microwave reactors could process tons of orange waste an hour and the York group collaborates with researchers in Brazil and Spain to test this intriguing possibility, as well as experimenting with other citrus and food waste, from lemons to rice.

At the start of 2017, our Green Chemistry Centre of Excellence together with researchers from the universities of Loughborough and Nottingham received £800,000 funding from the Engineering and Physical Sciences Research Council (EPSRC) to examine how food manufacturing systems can be improved to reduce waste. Food and drink is the largest manufacturing sector in the UK, employing approximately 400,000 people with a turnover of £76 billion. But, a staggering 9.9 million tonnes of food waste and food by-products are generated per year in the food industry alone, of which 56% is considered unavoidable, and the UK is one of the worst offenders.