Find out more about the concept of nucleophilic acyl substitution. 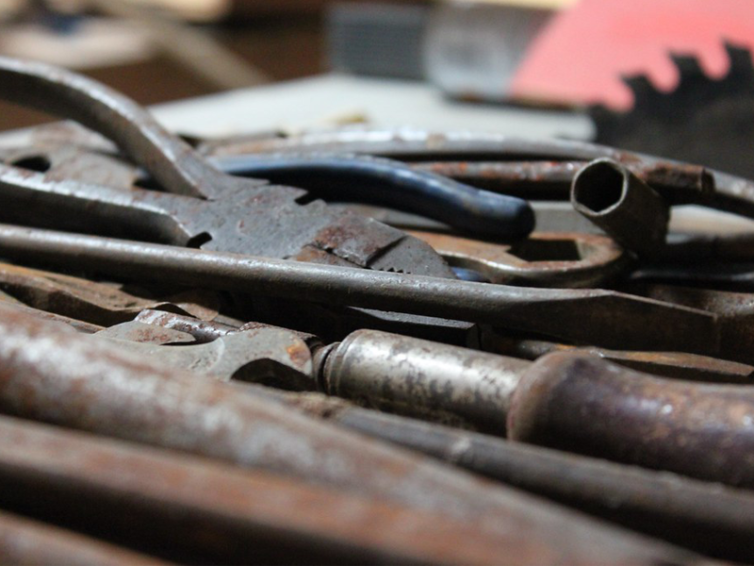 One of the most important reactions in organic chemistry is nucleophilic acyl substitution (sometimes called nucleophilic addition–elimination reactions). A good leaving group is replaced with a nucleophilic group, to convert one carboxylic acid derivative into another. For example, the reaction of an acyl chloride (RCOCl) with ammonia gives a primary amide (RCONH2).

In order for nucleophilic acyl substitution to take place, we first need a nucleophile (sometimes called a Lewis base). The nucleophile is an electron-pair donor, for example, a negatively charged ion, such as hydroxide ion (HO:–), or a neutral compound with a lone pair, such as ammonia (H3N:).

The Carbonyl Carbon is Electrophilic

Next, we can identify the site at which the nucleophile attacks. In nucleophilic acyl substitutions, this site is the carbon atom directly adjacent to the oxygen atom in the carbonyl C=O bond. This carbon atom is electrophilic (δ+) due to the adjacent oxygen atom being strongly electronegative. The oxygen atom pulls electron density towards itself and away from the carbon atom to which it is bonded – this produces a dipole moment, or a charge difference, between the two atoms (δ+C=Oδ–). In acyl chlorides (RCOCl), the carbonyl carbon is also bonded to a chlorine atom. Chlorine atoms are very electronegative and attract the bonding pair of electrons in the C–Cl bond. Therefore, the carbon atom of the carbonyl is made even more electrophilic (more partially positive, δ+) and a good target for an electron-rich nucleophile.

A Tetrahedral Intermediate is Formed Which Expels a Leaving Group

When the hydroxide ion (the nucleophile) reacts with an acyl chloride (the electrophile) it attacks the carbon of the carbonyl group. The bonding pair of electrons in the C=O bond moves onto the oxygen atom to form an intermediate, often called a tetrahedral intermediate (as the key carbon atom is now bonded to 4 groups and is tetrahedral). The double bond then reforms whilst the most stable leaving group, the chloride ion, is expelled from the molecule. (Good leaving groups are typically weak bases – the weaker the base, the better it is at accepting electrons and acting as a leaving group. For example, Cl– is a good leaving group, and an extremely weak base, whereas HO– is a poor leaving group, and a strong base.)

Sometimes Deprotonation Occurs Before the Leaving Group is Expelled

If we use a different nucleophile, namely an excess of ammonia (NH3), then a primary amide (RCONH2) is formed. The lone pair on the nitrogen atom of ammonia attacks the electrophilic carbon of the carbonyl and a pair of electrons moves onto the oxygen atom, just as before. However, to form the amide, the second equivalent of ammonia is needed to deprotonate the positively charged nitrogen atom, so that a chloride ion is ejected to re-form the C=O bond. (Notice that when ammonia donates its lone pair of electrons to an atom other than hydrogen it acts as a nucleophile. When ammonia donates its lone pair of electrons to hydrogen (or H+) it acts as a base.) 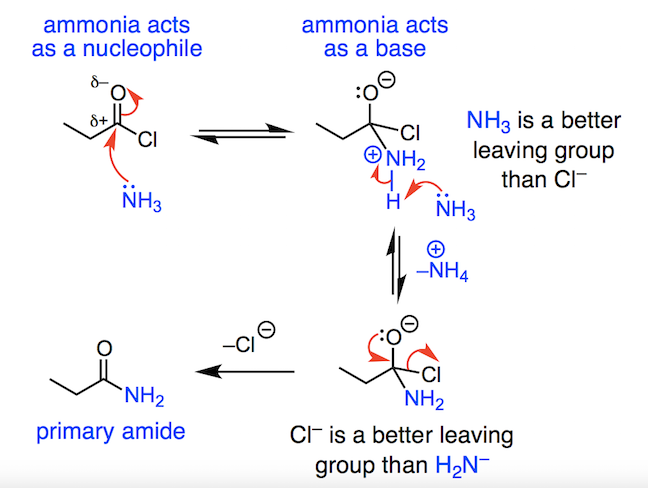 The amide product still possesses the carbonyl group, as well as being bonded to nitrogen, an atom that is more electronegative than carbon. So, we might assume that the carbonyl carbon in an amide will be electrophilic and so react readily, in further nucleophilic acyl substitutions. However, in an amide, the lone pair on nitrogen is donated to the more electronegative oxygen atom, to form a C=N bond – the lone pair is stabilised by delocalisation (i.e. it is spread over the molecule) and this is represented by a second resonance structure. As the lone pair is pushed towards the carbonyl carbon atom in the amide, the electrophilicity of the carbonyl carbon is significantly reduced (it is less δ+) and so it is much less reactive to nucleophiles.

From our observations of the stability of amides we might assume that the β-lactam ring of penicillin would not be susceptible to nucleophilic attack. However, delocalisation of a lone pair of electrons, from nitrogen to oxygen, would form a highly unstable molecule. If you have a molecular model kit then try to make a double bond in a four-atom square! You’ll find that this is very difficult and as such would require a considerable amount of energy to achieve. So, unlike normal amides, the β-lactam carbonyl group is much more electrophilic (it is more δ+) and more susceptible to nucleophilic attack. This helps explain why penicillins can form penicilloic acids, under mild conditions, in an aqueous environment – we will see that their β-lactam ring is broken through a nucleophilic acyl substitution reaction.