Mode of Action of Penicillin

Learn more about the mode of action of penicillin.
View transcript
5.9
Different antibiotics have different modes of action. This is because of their structures and degrees of affinity to certain target areas within bacterial cells. For example, antibiotics can inhibit protein or nucleic acid synthesis, or damage or disrupt the cell membrane. Alternatively, antibiotics like penicillin work by inhibiting the synthesis of the cell wall. The cells of humans and animals do not have cell walls, but this structure is critical for the life and survival of bacteria. The modes of action of both early sulfonamides and modern penicillins revolve around the concept of enzyme inhibition. Most enzymes will bind to a specific molecule called a substrate. The binding site on the substrate molecule must be complimentary to the active site of the enzyme.
60.5
Sulfonamides act to inhibit the synthesis of DNA within bacteria. This does not kill bacteria outright but inhibits the growth and multiplication of bacteria; giving the body’s immune system time to fight the infection. As such, sulfonamides are called bacteriostatic agents, which inhibit growth of bacterial colonies. Penicillins and other beta-lactam antibiotics are bactericidal as they actively kill bacterial cells. One important sulfonamide is Prontosil, a red azo dye, which was found to be antibacterially effective in vivo (when tested in animals) but ineffective in vitro (when placed directly into a test tube of bacteria). This arises because Prontosil is converted into the active sulfonamide by bacteria present in the small intestine of mammals.
111.6
Sulfanilamide is an effective antibiotic due its similar shape to para-aminobenzoic acid (or PABA). PABA is required for the production of tetrahydrofolate, which is needed for the synthesis of DNA in bacteria. The conversion of PABA into tetrahydrofolate is achieved by the enzyme DHPS (dihydroproteroate synthetase), which binds to the PABA molecule at its active site. As the structure of sulfanilamide is so similar to that of PABA the DHPS enzyme is not able to differentiate between the two; both have complimentary shapes to the active site in DHPS. So sulfanilamide can occupy the DHPS active site, preventing PABA from binding to DHPS and therefore preventing the production of bacterial tetrahydrofolate and DNA.
164.1
Although discovered later on, penicillins have proved to be the preferred method of treatment. Their action leads directly to cell death, rather than just the containment strategy provided by sulfonamides. Unlike animal cells, bacteria possess cell walls. For gram-positive bacteria this is comprised of a thick peptidoglycan wall. In contrast, a thinner peptidoglycan layer, supported by an outer liposaccharide membrane, encapsulates gram-negative bacteria. Individual peptidoglycan molecules are long chain polymers made by linking together sugars and amino acids. When linked together many peptidoglycan chains can form a rigid wall which protects the bacteria from harmful chemicals and stops them swelling and bursting. The peptidoglycan wall is constantly being assembled and repaired.
216.2
This is accomplished using a transpeptidase enzyme, which is able to link amino acids at the end of two separate peptidoglycan chains, joining them together to form the strong peptidoglycan structure. The mechanism involves two nucleophilic acyl substitution reactions; the first reaction forms an intermediate ester, which reacts to form a new amide bond that links the peptidoglycan chains.
247.7
Penicillin acts by inhibiting the transpeptidase enzyme - it mimics a peptidoglycan chain and an ester is formed that joins the penicillin to the enzyme. As the penicillin group is so large, it prevents attack of a nucleophile at the ester carbonyl and so the ester does not react with the second peptidoglycan chain. With the enzyme unable to form cross-links the peptidoglycan wall begins to degrade. No new peptidoglycan chains can be added to the cell wall and eventually the cell bursts.

We have seen that antibiotics, like penicillin, stop the growth of the outer casing of the bacteria, which is called a cell wall. Just like the walls of a house, without a strong cell wall, the bacterium collapses. You may find this analogy useful in helping to understand the mode of Action of penicillin. Bacteria have a very different type of cell wall to what we find in human cells – we can compare the different walls to an insulated double brick house in cold climates versus a single layer of wood in a timber house in warmer climates.

In people, cells are protected by being surrounded by other cells inside our bodies (like the timber house), while bacteria are exposed out in the environment and need stronger cell walls (like the insulated double brick house). In this analogy, the antibiotics are designed to attack and destroy the bricks, but not touch the timber, so they kill the bacteria, but not us.

The β-lactam Ring is Key for Antibiotic Activity

We have seen that the basic structure of penicillin consists of a β-lactam ring and an acylamino side chain (RCONH–). Based on the mode of action, the β-lactam ring is clearly crucial for its biological activity – the carbon atom in the C=O of the lactam is particularly electrophilic (δ+) and the adjacent thiazolidine ring confers further strain on the β-lactam ring, making it even more reactive to nucleophilic attack (try making a model of the ring system and you will see how strained the β-lactam ring is).

The carboxylic acid group is also important – this is normally deprotonated within the body and the negatively charged carboxylate ion (RCO2–) binds to a positively charged amino acid within the active site of the transpeptidase enzyme.

The β-lactam Carbonyl is the Most Electrophilic Site

Hydrolysis of the β-lactam Ring in Penicillin Makes it Inactive

Unfortunately, because of the high reactivity of the β-lactam ring, penicillin can react with water under acidic conditions (as found in the stomach), to break the β-lactam ring, in a hydrolysis reaction. The reaction mechanism is a nucleophilic acyl substitution reaction, forming a penicilloic acid, which does not have the desired antibiotic activity – the penicillin is rendered useless. 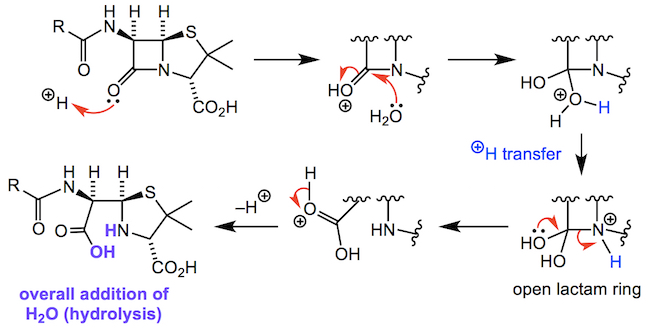 The Acylamino Side-chain Can Open the β-lactam Ring

Also, the acylamino side-chain can aid the ring-opening of the β-lactam ring. It can act as an internal nucleophile and attack the β-lactam carbonyl forming a very strained intermediate that then opens to break the β-lactam ring. This makes penicillin inactive and is sometimes described as a ‘self-destruct’ mechanism.

Altering the Acylamino Side-chain To Make a More Stable Penicillin

To reduce or stop the involvement of the acylamino side chain, and self-destruction, researchers have placed an electron-withdrawing substituent within the side-chain. This group likes to accept electrons and this makes the amide carbonyl group a weaker nucleophile, which is less likely to react with the β-lactam carbonyl. For example, penicillin G is more prone to ‘self-destruct’ than penicillin V, or phenoxymethylpenicillin.

Penicillin V contains electronegative oxygen in the PhO substituent, which draws the electron density away from the amide carbonyl group and so reduces its tendency to act as a nucleophile and react with the β-lactam ring. This has important consequences. While penicillin V is stable enough to survive the acidic aqueous conditions in the stomach and so can be taken as a tablet (which is typically preferred by patients), penicillin G does not and so needs to be administered by injection.

We have just covered some pretty challenging aspects of reaction mechanisms. Don’t worry if you have not grasped all of the fine details, you will still be able to make good progress. The key points to take on board are the importance of the β-lactam ring for biological activity and that the reactivity of the ring is affected by the groups that surround it within the penicillin.

We have seen that the 3-dimensional shape of penicillin is key to its biological activity, ensuring that it can dock into an enzyme (like a key fitting into a lock). The same is true for anticancer agents and researchers at York are investigating whether using 3D sound and visuals will allow scientists to design effective anticancer drugs quickly and more efficiently. The ‘Sonicules’ project models the interaction of a drug molecule with an enzyme and displays the interaction as sound, alongside visual representations. The software has been designed that portrays drug design in a more game-like way – members of the public can have a go at a computer game to help understand how drugs are designed and how sound helps this process.