The Stages of Brewing Beer

Read this introduction to beer brewing and find out how beer is made, along with a step by step process for how to make your own. 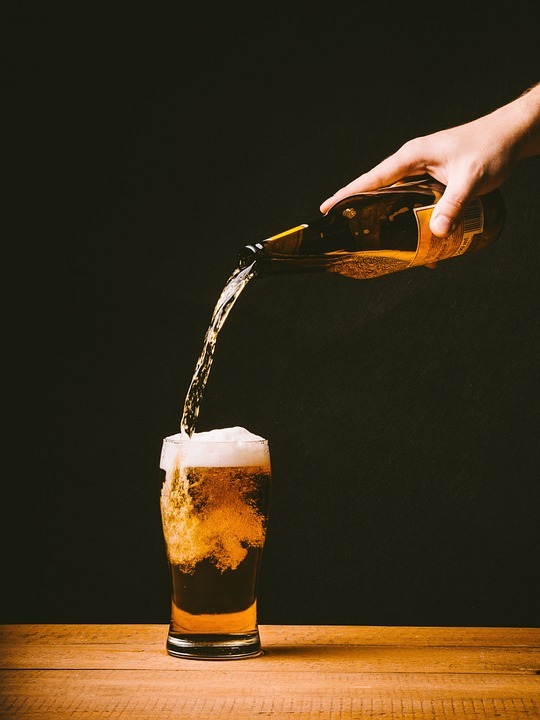 Beer is a fermented aqueous drink that is made from four main ingredients: water, hop, yeast and barley malt. Barley malt is sometimes partly made from rice, corn or wheat, all of which are very starch-rich. Each of the four components is added at different times during the beer making process.

We begin the beer making process with the mash, which is the name of the slurry formed from mixing barley malt and water. Barley malt makes up the body of the beer, and typically 200 g of barley malt is needed to make a litre of beer. The amount of barley malt added to the water determines the strength of the resultant beer, and the type of malt (rice, corn or wheat) used controls the colour of the final product.

The mash is then heated to around 60 °C. At this temperature, the enzymes in the malt – called amylase and protease – are able to catalyse the breakdown of starch and proteins in the mash. This produces a mixture of sugars and peptides. To ensure that the amylase and protease enzymes are present in mash, harvested barley has to go through a process called germination to turn it into the barley malt that is used in the mash.

To start germination, barley is left to soak up water in steeping tanks for a few days. The soaked barley is then aerated at around 15 °C in a large room, where it is constantly turned to promote sprouting. The aeration takes around five days and the resultant barley is called the green malt. The green malt is then dried at temperatures over 48 °C, which stops sprout growth. Changing the drying temperature will change the type of malt produced. This dried barley is the barley malt that goes into the mash; it is full of sugars, starch and the enzymes that are needed in the mash to catalyse the protein and starch degradation.

After the enzymes have catalysed the starch and protein degradation, the mash is filtered. What remains is a sugar solution that is called the ‘wort’. The wort is put into a brewing kettle, then boiled, and hops are added, for at least an hour. Only a few grams of hops are needed per litre of beer (much less than the barley malt), but it is a very important ingredient in the beer making process. When the hops are added, they form insoluble complexes by bonding with polypeptides and proteins, which is important in stabilising the beer foam and it acts as a steriliser.

When the wort has been cooled to room temperature, and the used hops are removed by filtration, the resulting solution is called ‘hopped wort’. This solution is then moved into a fermentation vessel and the yeast is added. The yeast cells in the hopped wort convert sugars into ethanol and carbon dioxide; this process is called anaerobic (without oxygen or air) fermentation.

The fermentation process is completed in one week, and yields a mixture called ‘young’ or ‘green’ beer. This young beer is not drinkable, as it contains bad tasting and smelly compounds that are a result of the fermentation process. Two compounds that occur in high concentrations are butane-2,3-dione and pentane-2,3-dione (both contain two ketone functional groups, hence the name dione) and they have very buttery tastes, which is highly undesirable in lager.

To allow these unwanted, foul tasting compounds to decompose, the beer has to undergo conditioning. This period can take anywhere from a few days (for ale) to several weeks (for lager). The young beer remains in contact with the yeast to allow the development of a clearer appearance and a more mature flavour. During the conditioning, enzymes within the yeast are able to reduce both butane-2,3-dione and pentane-2,3-dione, converting them into butane-2,3-diol and pentane-2,3-diol respectively, until they fall below critical values (<100 ppb or 0.1 mg per litre of lager). 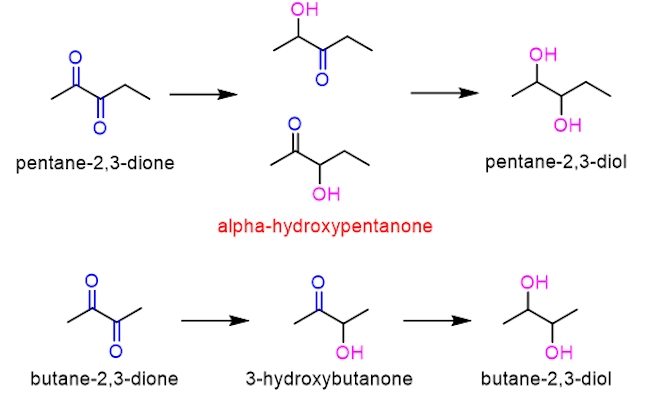 Once conditioning is complete the yeast is removed by filtration through porous rock. Yeast that has been used in the beer making process is then sold as baker’s yeast (yeast used as a leavening agent for bread-making and baking), as bedding for growing mushrooms, in ethanol fuel and as a feeding supplement for livestock due to its high protein and vitamin B levels.

The beer is then packaged and sold. An important step in the packaging process is the addition of CO2, under pressure, resulting in the formation of beer foam. For the stability of the packaged beer, it is important to ensure there is no oxygen in the beer containers, as we will see later.

Historically, beer has faded in and out of popularity. For example, it was a necessity in medieval society due to the practicality of drinking beer over dirty water, while it is currently outlawed in the Middle East. But the current trend in increasing production levels suggests the world’s fondness for beer isn’t going to fade anytime soon.

See in the downloads section below for a set of images that summarise the key stages of brewing beer (that include the chemical structures above).

Started in 2016 in Yorkshire, Toast Ale is a company that brews beer from unsold bread and the discarded heels of loaves from sandwich makers (apparently, in the U.K. up to 44% of bread is wasted – staggeringly high!). All profits go to fighting global food waste.