An introduction into the antioxidants found in tea and citrus fruits, such as vitamin C. 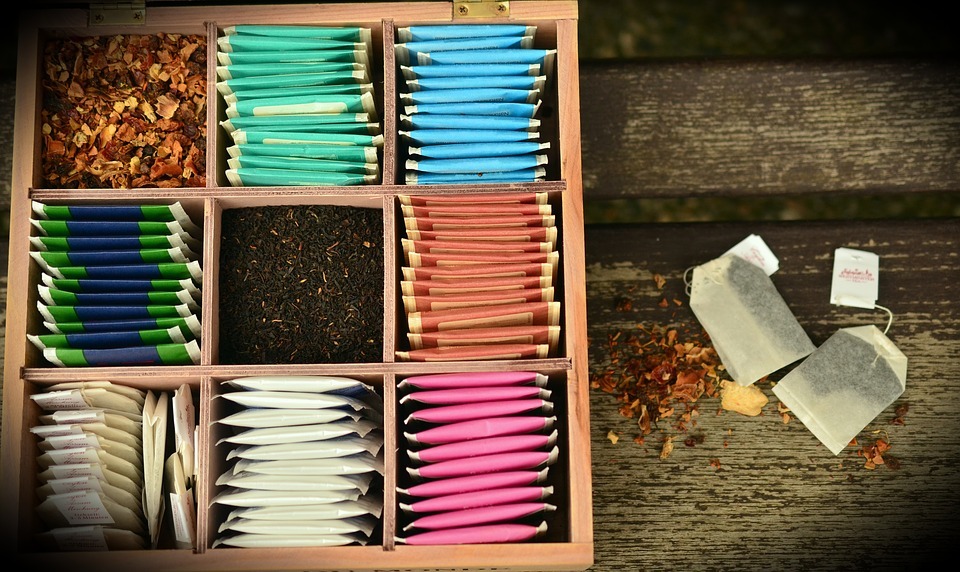 Antioxidants are very important in maintaining the health of the human body. They play a vital role in stopping, or reducing, the oxidation of other biomolecules.

Oxidation is the process by which a molecule is oxidised; this occurs due to the loss of electrons. Oxidation can be helpful in certain situations: for example, oxygen-based cleaners (bleach is a solution of sodium hypochlorite, NaOCl, dissolved in water) and hydrogen peroxide sterilisers found in many household cleaning products use oxidation. However, it can also be incredibly destructive, like the blackening of a potato or the browning of an apple.

An example of oxidation is the rusting of iron. When iron is in its pure, unoxidised form, it has three electrons that can be removed easily. When iron undergoes oxidation, the three easily removable electrons are lost and it has a 3+ charge. This oxidised Fe3+ ion is a brittle, red powder, in stark comparison to the structurally sound unoxidized iron. It is clear why you would want to try to minimise the effects of oxidation on structures made out of iron.

Oxidation does not only affect molecules and compounds outside the body. The presence of free radicals, within the body, can have very destructive effects. For example, oxygen-centred radicals, such as HO•, cause very serious damage to cells resulting in ageing and disease. This process is called oxidative damage because reactive oxygen-containing species, such as HO•, are involved and another definition of oxidation is the reaction of a substance with oxygen (or a reactive oxygen species).

Antioxidants are important because they are able to react with free radicals, turning them into unreactive species. The removal of reactive oxygen-centred radicals helps to protect our body from oxidative damage, and nature has different ways of doing this, including using antioxidants. Vitamin C, or ascorbic acid, is a type of antioxidant (which has the structure shown below).

Vitamin C is naturally found in all citrus fruits and many non-citrus fruits such as papaya, pomegranate and raspberries. Unlike humans, many animals can make their own vitamin C; for example, goats can produce over 13 g of their own vitamin C every day. Humans need a much smaller amount of vitamin C; the daily recommended maximum is 90 milligrams for an adult male and slightly lower for a female, but it is still an essential vitamin in the human diet. Without consuming an adequate amount of vitamin C, humans are susceptible to developing an illness called scurvy, which results in tiredness, fever, bleeding gums and, in extreme cases, death.

Working in harmony with vitamin E

Vitamin C works in harmony with vitamin E (which has the structure shown below) to protect the body from oxidative damage. Vitamin E is another antioxidant. While vitamin C is water soluble and is important for tissue growth and repair, vitamin E is fat soluble and plays an important role in protecting cell walls from damage caused by oxygen-centred radicals (e.g. RO•), which are formed as by-products of metabolism (the chemical processes that occur within a living organism in order to maintain life).

The process of metabolism takes O2 and converts it into 2O2- (each O2- then accepts two H+ ions, or protons, to form water); this means that a total of four electrons needs to be gained (two electrons per oxygen atom). Due to a very high energy barrier, only one electron can be gained at a time resulting in the production of various oxygen-centred radicals (e.g. RO•) as O2 is converted into 2O2-. Here is a simplified diagram to show how vitamin C and vitamin E work together to protect cell walls.

Vitamin E donates a hydrogen atom to a reactive oxygen-centred radical (RO•) forming an alcohol, ROH, and a vitamin E radical (an aroxyl radical, ArO•), which is much less reactive (destructive). The vitamin E radical can then abstract a hydrogen atom from vitamin C, forming a vitamin C radical, which is converted back into vitamin C by an enzyme; the cycle then continues ensuring that cells are protected from oxidative damage. 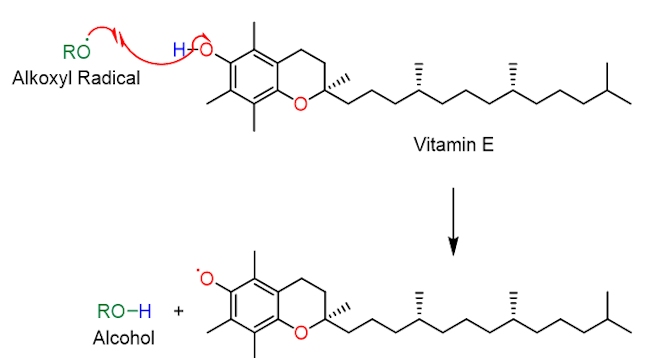 The structure of vitamin E contains a substituted phenol. A destructive oxygen-centred radical, RO•, selectively abstracts the hydrogen atom shown in blue, in vitamin E. This is because the O–H bond in vitamin E is relatively weak, much weaker than the RO–H bond formed in the alcohol (i.e. the reaction is driven forward by the formation of a stronger O–H bond). Notice than when the phenolic hydrogen is abstracted the resulting oxygen-centred radical is stabilised by resonance – the unpaired electron can move around the benzene ring (in pink). As it is more stable than the RO• radical it is much less destructive and harmful.

Fats and oils, such as olive oil, butter and margarine, are widely used in cooking and contribute to the flavouring of foods. However, they are susceptible to oxidation, which is responsible for the formation of off-flavours and aromas, described as rancidity. The oxidation of such oils at room temperature is called autoxidation, and it is influenced by factors including light and temperature (cooking oils should be stored in a cool, dark place). Autoxidation involves radical reactions, and unsaturated fats, such as linoleic acid, are particularly prone to autoxidation. This is because their structures include a skipped diene unit(s), ~CH=CH–CH2–CH=CH~, which is particularly susceptible to reaction with oxygen-centred radicals. An oxygen-centred radical (e.g. RO•) abstracts a hydrogen atom on the carbon in-between the two double bonds (this is a particularly weak C–H bond). This gives a carbon-centred radical, ~CH=CH–CH•–CH=CH~, that is stabilised by delocalisation involving the neighbouring two C=C bonds. This radical then reacts with oxygen to give a range of oxidised products, that are responsible for the undesirable flavours. (For details of the reaction mechanisms see the autoxidation pdf below.)

Antioxidants are often added to foods to slow down their oxidation and extend their shelf-life (e.g. vitamin E can be added to vegetable oils and margarine). However, fans of potato crisps (potato slices deep-fried in cooking oil) will note there are no added antioxidants – so how do the crisps stay fresh in the packet? The answer is to remove oxygen, and store them under nitrogen gas! However, once opened, they come into contact with oxygen and are prone to autoxidation, hence that unpleasant rancid (stale) taste on standing.

Do packaged foods with labels promoting antioxidants boost your health?

No, not necessarily. Outside of science, it has become more of a marketing term, to attract customers, rather than a scientific term. For example, food manufacturers may add vitamin C or E to their product, in small amounts, to ensure shelf-life (e.g. to delay the oxidation of fats that make them go rancid), and then label it as containing antioxidants, presumably in the hope of boosting their sales. Also, some mention antioxidant ‘power’, represented by ORAC (which stands for oxygen radical absorbance capacity). But this measures antioxidant activity in a test tube, not in the body, and it has not been validated, so many believe it misleads consumers. The best health advice remains to get your antioxidants from a well-balanced diet containing plenty of varieties of fruit, vegetables, whole grains, and legumes.