In this article, we'll go through a chemistry activity that involves paperclips and modelling polymers.
View transcript
6.1
A polymer is a large molecule made up of numerous small building blocks, called monomers. These monomer building blocks are joined together to form chains that are long and straight, or slightly branched, or highly interconnected. For example, linking together molecules of ethene, the simplest alkene, forms poly(ethene), or polythene. As just one type of monomer is used this is classed as a homopolymer. When two different types of monomers are joined in the same polymer chain, the polymer is called a copolymer. For example, linking together molecules of ethene with ethenyl ethanoate, which contains both alkene and ester groups, gives poly(ethylene vinyl acetate) or PEVA.
47.4
In PEVA, there are different ways in which the monomers could be linked - if they are linked alternately, it is called an alternating copolymer. In contrast, a block copolymer has long sequences of the same monomer unit, whilst, as the name suggests, for random copolymers the two monomers are linked in any order. Linear copolymers consist of a single main chain whereas branched copolymers consist of a single main chain with one or more polymeric side chains. If the side chains have a different structure to the main chain we call this a graft copolymer. With so many variations, it can be tricky to visualise the different structures of polymers, so in this activity we will model their structures using paper clips.
91.9
A paper clip will represent the monomer, which can be linked together, in different ways, to simulate the way monomers join up to form polymers. Start with using the same type of paper clips to model a linear homopolymer, then change it to a branched homopolymer - consider how the different chains can pack together - and then model a crosslinked homopolymer. Also, consider how different chains can twist and bend to form a tangled arrangement like cooked spaghetti tangled up on a plate. Now move on to using two different paper clips to model copolymers - alternating, random and then graft. There are some limitations to using paper clips, including the fact that it gives a two-dimensional model, whereas polymers make three-dimensional lattices.
136.4
Nevertheless the designs can be effective and fun to make! Be creative and take a picture of your favourite design, naming the polymer type and post your results - we look forward to seeing your stationery model!

Chemists often build molecular models using plastic rods and balls to represent different atoms and their bonding. It can often be easier to visualise the symmetry, shape and potential bonding interactions of a molecule when you have the 3-D model on hand to rotate.

In order to aid your understanding of how different types of polymer can be formed we are going to use paperclips to represent individual monomers. When joined together they will form different variations of polymer chains.

First take a set of paperclips all of the same size or colour. These all represent the same molecule. Joining them together shows how many of the same monomer can be used to form a long, polymer chain. If you had many of these chains adjacent to each other they would pack closely together and so you would have a high-density polymer.

Add some paperclips at regular intervals to act as side chains to the main polymer chain. This would represent a lower-density polymer as the steric hindrance of the side chains prevents the polymer chains from packing as closely together. 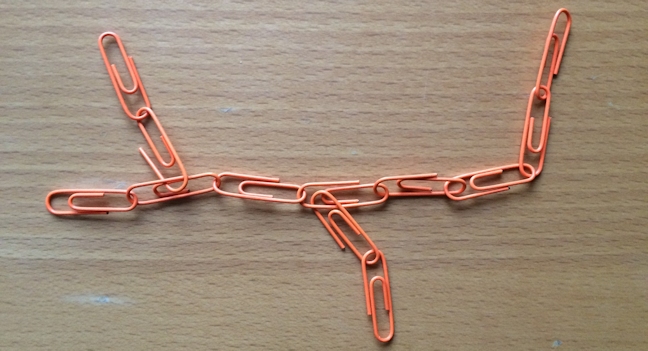 Let’s start a new polymer chain and this time include two different types of monomers. You may differentiate your monomer molecules through using paperclips of different types, sizes or colours. If you have a large enough collection of paperclips at your disposal then you can make all of the types of polymer listed below and then compare them.

First put your paperclips together in a random order. This would indicate two monomers which are able to react with both themselves and the other available monomer. Next create a chain of alternating monomers. These monomers might be bi-functional. The functional groups they possess can only react with the functional groups on the other monomers. Finally create a block co-polymer which consists of a length of a single type of monomer followed by another length of the other monomer. As each monomer might have different properties these are carried into the properties of the polymer. Most commonly one monomer will be hydrophilic and the other monomer will be hydrophobic. This creates a polymer with a hydrophilic section and a hydrophobic section.

As we have seen, polymers with discrete hydrophilic and hydrophobic sections can aggregate into micelles when placed in water. They will have a hydrophilic exterior and hydrophobic interior. The interior can be used to house drugs for targeted delivery or to “capture” oil and dirt when used in soaps and washing-up liquids. 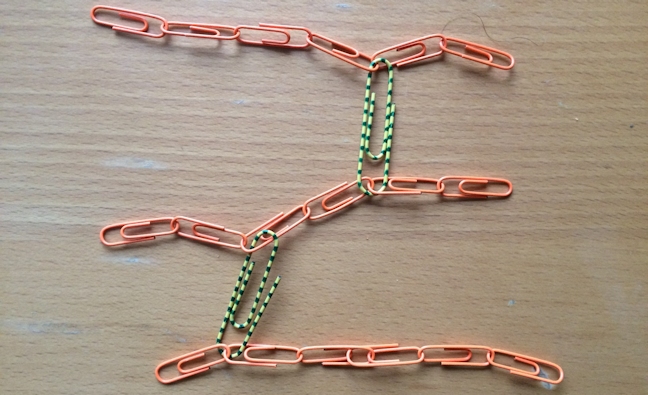 Another factor that needs to be considered is tacticity. This term is used to describe the way pendent groups on a polymer chain are arranged on a polymer backbone. The tacticity of a polymer is determined by what side of the polymer chain the pendant groups are on (i.e., are all of the groups pointing towards us, or are some pointing away from us). This is important because the relative position of the groups can have dramatic effects on the physical properties of the polymer.

Is it possible to illustrate intermolecular forces and/or tacticity in your paperclip model?