Polymers and Advertising in Sport

Almost every day you will see a commercial or product placement of some sort. Many companies invest heavily in their marketing and advertising departments in order to promote their products as widely as possible. This holds true for sporting products.
View transcript
6.6
In England alone, around 16 million people aged 16 and over play sport at least once a week. These people all benefit from Chemistry - from the equipment, clothing and footwear used, through to the surfaces laid in sports venues. However, it is probably fair to say that the important role of modern synthetic materials in sport is not necessarily recognised and appreciated by those who play it. For example, how many football players realise they are kicking a football with a covering of polyurethane, rather than leather, as leather has a tendency to absorb water causing the ball to become heavy? This activity is an opportunity for us to champion this cause by promoting the positive impact of high-performing polymers in an advertising campaign.
50.6
Pick a piece of sports equipment, clothing or footwear of your choice and make a poster to advertise the chemistry behind it. Keep it simple by focusing on the impact of just one modern material, noting the beneficial properties it provides - for example, it may provide lightness, durability, strength and/or flexibility. You could pick cycling, and advertise modern carbon fibre bike frames, or athletics and the modern hard wearing and bouncier polyurethane all-weather tracks, or perhaps the polyamide fluffy outer covering of tennis balls that reduce aerodynamic drag, whilst providing resistance to wear and abrasion. Alternatively, you could focus on how polycarbonate is often used in riding and biking helmets, helping protect riders competing in equestrian and cycling competitions. The choice is yours.
100.5
Be creative and use an eye-catching image and distinctive clear and concise lettering - perhaps a promotional poster for one of your favourite films will inspire you? Make a pdf of your poster, and share with our learning community - it will be interesting to see what you pick! Don’t forget to add your reason for picking your ‘star material’. Let’s show the sports world that Madonna was right when she said that ‘we are living in a material world, a material, a material, a material world.’

Almost every day you will see a commercial or product placement of some sort. Many companies invest heavily in their marketing and advertising departments in order to promote their products as widely as possible. This holds true for sporting products.

However, even without a budget stretching into the millions of pounds it is possible to create effective and eye-catching advertisements for all sorts of sporting items. Therefore, why not have a go at making your own advert for a product of your choice:

Choose a product that you use or simply one that you are interested in. Highlight the benefits of your chosen product over competitors and try to encourage people to take up your chosen sport and use the product you are advertising. You could also take a picture and demonstrate where different polymers have been used.

Remember to show your advert to your peers to see if anyone would want to buy your merchandise. If you’re feeling particularly creative then why not invent a brand new product or company! 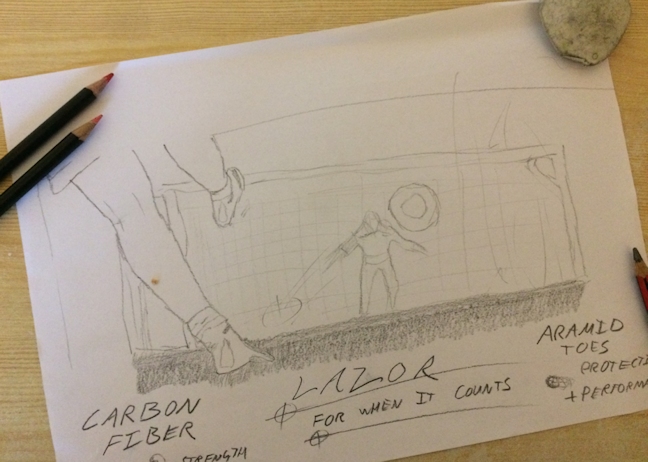 Why not come up with a slogan, or short promotional blurb, advertising your polymer? You might like to take inspiration from two popular advertising slogans for ‘plastic’, namely, Mastercard’s clever For Everything Else, There’s MasterCard and Don’t Leave Home Without It from American Express.

When you have selected your chosen product, look out for the presence of plasticisers. A plasticiser is a substance which when added to a material, usually a polymer, makes it flexible, resilient and easier to handle. For example, polyvinyl chloride (PVC), [-CH2CHCl-]n, is an extremely hard plastic, and to make it more flexible, plasticisers are added. These are small organic molecules that embed themselves in-between the PVC polymer chains so they cannot interact with each other as well. This reduced interaction ensures that the polymer is more pliable.

In PVC, the most common plasticisers are a class of esters called phthalates (the most common being bis(2-ethylhexyl) phthalate or DEHP, a diester with the chemical formula C24H38O4). They are the preferred plasticiser found in, for example, trainers, because of their strong performance, cost-effectiveness and durability. The characteristics of an individual phthalate often make it well-suited to a specific product, allowing manufacturers to meet unique requirements for its use (function and safety specifications), appearance (texture, colour, size and shape), durability and wear.

Phthalates are only slightly volatile, and so tend not to evaporate and they have little or no odour. Despite this, there has been some concerns over the presence of phthalates in ‘new car smell’. The reason for the concern is that some of these compounds have been found to interfere with normal sexual development in male rats.

Some scientific studies have indicated that phthalates behave as endocrine disruptors in human beings, that is, they interfere with our normal hormonal mechanisms. Consequently, the use of phthalates with relatively low molecular weights has been restricted in the European Union. In contrast, scientific studies on phthalates with high molecular weights (called high phthalates) have concluded that they do not pose a risk to human health at typical exposure levels.

The health concerns associated with phthalates, coupled with the fact that they are not chemically bonded to polymers and so can leach out into the environment, have inspired the development of alternatives and this continues to be an active area of research.

The Impact of Chemistry on Sport

The impact of chemistry on sport is nicely illustrated by the 100 metres sprint. At the Berlin Olympics, in 1936, Jesse Owens ran the race in 10.3 seconds. This is slower than Usain Bolt’s record of 9.58 seconds in 2009. However, Owen’s track surface was made of cinders, he wore heavier and less flexible leather shoes, and his “starting block” consisted of two holes in the cinders that he had to dig with a trowel. According to a biomechanics analysis, if Owens had used a real starting block, worn modern shoes, and run on a rubber-polyurethane surface, he would have been within a single stride of Bolt!

To illustrate the point, this clip shows how a modern sprinter can maximise the use of the starting block.

So, without new technology, peak human performance has not increased by that much over the years.