Fun Chemistry Experiment: How to Make a Natural Plastic

In this article, Andy Parsons talks through making a natural plastic from household materials as a fun everyday chemistry experiment.
View transcript
6.4
Amazingly, from the early 1900s until about 1945, milk was commonly used to make various plastic ornaments, ranging from buttons, beads and other jewellery, to fountain pens, and comb and brush sets. The plastic, called milk plastic, or more usually casein plastic, was even used to make jewellery for Queen Mary of England! First milk was converted into curds, which were hardened on soaking in a solution of methanal in water. This activity explores making curds from cow’s milk. Milk contains a family of proteins called casein - proteins, are comprised of long chains of amino acids that are linked together by amide bonds, called peptide bonds. Casein makes up around 80% of the proteins found in cow milk.
51.5
These proteins group together to form sphere-like structures called casein micelles, which form a suspension in milk. These micelles consist of casein molecules, together with ions including calcium, and they have negatively charged groups on the outer surface. On addition of ethanoic acid, or vinegar, the negatively charged groups in the casein micelles are protonated. This causes them to come apart and the proteins forming the micelle are no longer soluble and they form a precipitate of small white blobs - as the proteins clump together into a mass called curd. This process occurs naturally when milk sours. So, this activity involves adding vinegar to hot cow milk, and stirring it, to make curds.
94.8
Collect and dry the curds, and thoroughly knead it, like dough, to make a shape, or put it in a mould. You can colour it by mixing it with a food colouring, before letting it dry for at least 24 hours to form a hard object of your choice, which should be related to chemistry. Alternatively, when dry, you can it colour and decorate it using marker pens. You might like to try other common household acids, such as lemon juice - does this work as well as vinegar? What about adding the vinegar to hot milk at different temperatures? Use a thermometer to record the temperature and find out what is the best temperature for forming the maximum amount of curds.
132
Also, what about using other types of milk, such as skimmed milk? Take a picture of your chemistry-related object and post your results - we look forward to seeing your findings, from this ‘hard’ experiment.

We are going to make a natural plastic using proteins. Casein is a mixture of proteins found in cow’s milk which can be extracted through the following method and then moulded into whatever shape you want.

The following ingredients will be required:
• Fresh cow’s milk
• 1-5% strength vinegar
• A variety of food colourings

Ensure that you read through all of the instructions below before beginning the experiment to ensure that you understand exactly what will happen at each step.

Measure out approximately 1 cup (236 ml) of milk and pour into a saucepan. Heat until the milk becomes warm. However, do not heat excessively as the milk should not be left to boil.

Measure out one tablespoon of vinegar. Add the vinegar to the warm milk and stir until the milk cools. At this point you can add some food colouring of your choice in order to add some colour to your protein moulds. Here we used green and red food colouring as well as doubling the volume of both milk and vinegar used, in order to process a larger batch of casein.

Once the milk has cooled some casein should have precipitated out of the solution. (The acid protonates the negatively-charged casein micelles in milk and the neutral protein precipitates – even acidic drinks like Red Bull or Coca Cola can be used). Pour the milk through the strainer and collect any solid product. Dispose of any remaining milk down the sink.

The solid product is known as casein and contains a variety of proteins. Transfer the solid product to a piece of paper towel and fold the towel onto the casein in order to dry the product.

Continue transferring the casein to fresh paper towels until most of the water has been removed.

Take the resulting casein and press the solid into any shape you want. Securing the casein into a mould or ice cube tray allows specific shapes to be made. A more detailed product can be achieved by slowly layering casein into the mould. Push down firmly in order to compact the solid each time.

Once placed into an appropriate mould the casein should be left to continue to dry. Warm areas between 30-40 °C, such as above radiators or in greenhouses, are ideal for storing the mould.

The final product should be cast into a shape based on the mould it was placed into. The solid is hard but sometimes brittle and so should be handled relatively carefully. Casein is non-toxic, however, we would not recommend consuming the results of the experiment.

Although the solid result may be ready after a few hours, leaving the casein in a mould for up to four days will result in the driest and strongest structure. Here we see shapes less than a day after being made. Although they are solid they are still “moist” and easily develop fractures as they have not fully dried.

After being left for over a week the shapes become very hard but also experience a slight shrinking in size. Be sure to account for this by using larger moulds if you want plastic objects of a specific size. 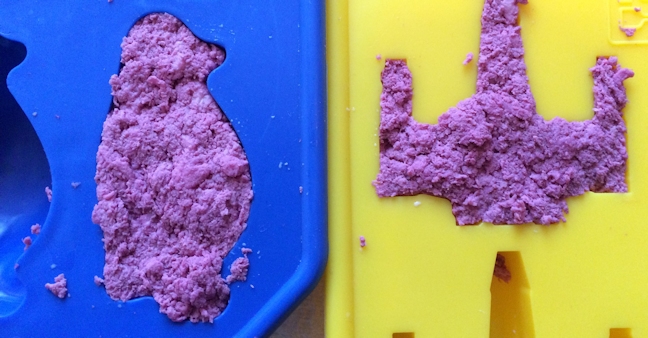 When you are done we would love to see your results! Upload a picture of your creation on our open Padlet (we have included some examples from a previous course that we hope will help inspire you) and/or on Twitter or Instagram hashtag #FLchemistry.

Casein is a biopolymer. That is, it is a polymer produced by living organisms and it is biodegradable. Biopolymers are capable of being degraded under atmospheric conditions by, for example, hydrolysis of ester or amide bonds by bacteria or other living organisms (i.e. the reverse of the condensation polymerisation process in which they were formed). The end products are water, carbon dioxide, and biomass (plant or animal material used for energy production). Biodegradable polymers can be either natural or synthetic.

Polysaccharides, such as starch and cellulose (40% of all organic matter is cellulose), represent the most characteristic family of natural biodegradable polymers. Glucose units in starch and cellulose are held together by acetal linkages (RO-CH(R)-OR), called glycosidic bonds. Cellulase enzymes found in fungi and bacteria can catalyse the hydrolysis of the glycosidic bonds to break down the polymer, ultimately, into glucose units. (In the laboratory, to speed up the hydrolysis reaction of polysaccharides with water, the reaction is heated with an acid or base catalyst. This process is used in the food industry to peel, for example, tomatoes. Heating vegetables with a sodium hydroxide solution dissolves the cell walls and weakens the polysaccharide (cellulose and pectin) network in the skins.)

In contrast, a polymer like poly(ethene) is typically classed as not biodegradable. There is nothing in the natural environment that will easily break down this polymer and so it persists for many years (a conventional poly(ethene) bag was recently found to be intact after three years buried in soil or submerged in the sea). Eventually, poly(ethene) will be broken down by, for example, the action of sunlight, heat and moisture. The long lifetime is because poly(ethene) is a long chain alkane, [–CH2–CH2–CH2–CH2–]n. Alkanes are unreactive compounds because they contain strong, non-polar C–H and C–C bonds.

As consumer demand for sustainable products grows, you may well have seen an increased use in the terms ‘biodegradable’ and ‘compostable’ in marketing products. These terms are often used interchangeably, which is unfortunate as they don’t mean the same thing. For biodegradable polymers it is important to note that the length of the biodegradation process depends on environmental parameters such as humidity and temperature. So, claiming that a material is biodegradable without any further context (i.e., in what timeframe and under what environmental conditions) is misleading to consumers. Reputable companies will often make more specific claims, primarily certifying that their biopolymers are compostable. Compostable polymers are a subset of biodegradable polymers, defined by the standard conditions and timeframe under which they will biodegrade. For example, one biodegradable polymer that is compostable is polylactide (PLA), which is used to make food packaging. This polymer is certified to European Standard EN13432, which means it must break down under industrial composting conditions in less than 12 weeks.