This article discusses the financial business case for V2G and what this means for the future of the technology.

As with anything else, the business case for V2G is a balance between the costs and the benefits.

Hardware costs include both getting the equipment transported to site and fitted, and the hardware itself. Installation costs are unlikely to change significantly over time, although some reduction is achievable through scale – for example, installing 10 V2G units at a site or in a similar geographic area might cost 5 times as much, rather than 10 times. However, hardware costs are the greatest variable. In 2017 V2G hardware cost in the region of £10-15k per unit. Since then V2G prices have dropped dramatically. But it is not the actual cost of a V2G unit that is important, so much as the relative cost difference between a V2G unit and a smart charger. This is called the “V2G Premium”. This premium is important because it represents the ‘added value’ of a V2G charger compared to a standard charger. Based on the analysis of the current value propositions and customer feedback from V2G trials, it is generally accepted that the V2G premium would need to be less than £2,000 for the technology to be acceptable to the mass market. 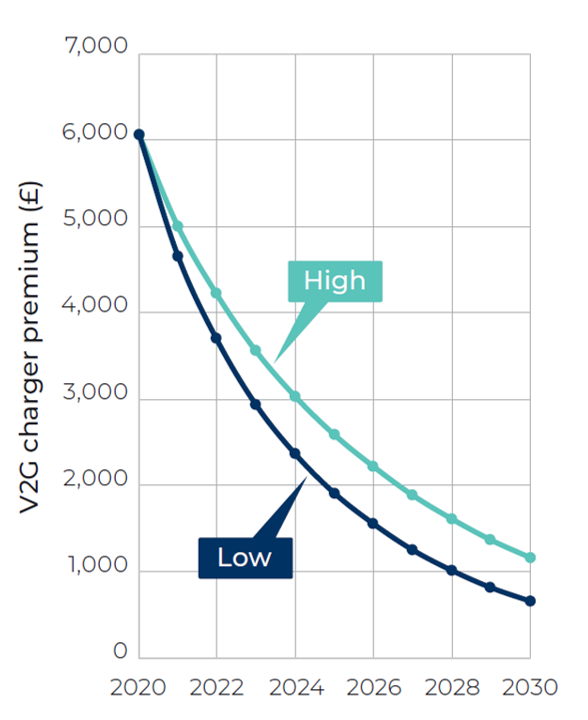 V2G-Britain was a UK based feasibility study, looking at the business case for V2G. The project reported that V2G charger premiums were expected to reduce in a similar way to domestic solar PV. This shows that the premium over an equivalent smart charger is expected to reduce to between £656 – £1,164 by 2030 (Figure 1).

Battery degradation is a significant concern for V2G with wildly conflicting views on what impact V2G actually has. One study by Dubarry et al in 2017 reported that additional battery cycling due to V2G would shorten battery life; while a second study in the same year by Uddin et al indicated that operating V2G within certain parameters could actually have a positive impact on battery degradation for EVs. Battery degradation is extremely difficult to model and replicate due to the wide range of factors which can impact it.

Work by the University of Warwick through the EV-elocity project hopes to provide further insight, but even this is likely to be limited due to the relatively small scale of the trial. This was also modelled in the V2G-Britain project, where the low scenario assumed no financial impact from V2G on battery degradation, while the high scenario estimated a degradation cost of 3.2p/kWh, or roughly £150/year. In scenarios where V2G results in high levels of battery degradation, this has the potential to limit the benefit achieved through V2G, making this a significant concern. However, as EV batteries improve and grow in capacity, the impacts of degradation become much less significant.

V2G units are typically linked to a remote operating system. This system provides the control instructions to the V2G unit to tell it how to operate, and in doing so, how and when to charge or discharge in order to achieve value. For applications such as V2H the operating system may be local (stored in the V2G unit), however for any energy trading purposes V2G needs to connect to a remote operating system in order to send and receive real-time control instructions. Typically, these instructions would be issued by an aggregator. It is estimated that aggregation costs are around £25/EV per year. However, in most cases the aggregator would take a share of the income rather than a standard system fee.

As discussed in previous sections, there are a range of value propositions for V2G where the benefit to the customer was not always financial. These less tangible benefits make it hard to create an effective financial business for V2G. However, if we take proposition 1 (Revenue Generating/Energy Trading) we can start to demonstrate whether the V2G business case stacks up.

Revenue generation is based in part on the power of the V2G charger, with revenue increasing reasonably linearly with power rating. Assuming a 2-5 year payback period, we can calculate a “break-even premium” for each power rating. Looking back at the graph of projected V2G premiums above, we can get an indication of when premiums will reach this value (a “Premium Horizon”). This analysis is shown in Table 1.

NOTE: This is not 100% accurate as the graph above is based on the cost of a specific power rated V2G unit and may not directly apply to higher power ratings. However, we will use this in lieu of any better sources of data.

Table 1: How revenue increases with V2G power rating and how this relates to different V2G applications

We can see from Table 1 that different use cases become financially positive in different timescales, with higher power V2G units for buses or fleet depot potentially becoming viable now. However, it should be noted that while new flexibility trading opportunities are opening up, the value of energy trading services is highly volatile, making it difficult to predict future revenue accurately.

The main challenges for the financial business case for V2G are:

What do you think?
In business, things often boil down to simple economic choice. But should this be the case when considering V2G as a solution? Share your thoughts in the discussion below, or comment on other learners’ suggestions.