tbc
Overview of the Project Sciurus

In this step we are going to look at a domestic V2G case study and see how this might differ from the non-domestic applications we looked at in the previous step. There have been many domestically focused V2G projects over the last few years, but we’ve picked the one which, at the time of writing, is the largest domestic V2G demonstration project in the world – Project Sciurus.

We’ve mentioned Project Sciurus several times in this course already, but its significance deserves a closer look here. It was a hugely ambitions, UK based project that ran between 2018 and 2021. Combining experts in energy, (OVO Energy, Kaluza) transport (Nissan, Cenex) and infrastructure (Indra) to develop a real-world domestic solution for V2G and installed 320 V2G units in real homes across the UK. The project created both the technology and business cases to prove the economic, environmental and societal value of V2G. The partners in the project were Cenex, OVO Energy (including Kaluza), Nissan, and Indra. 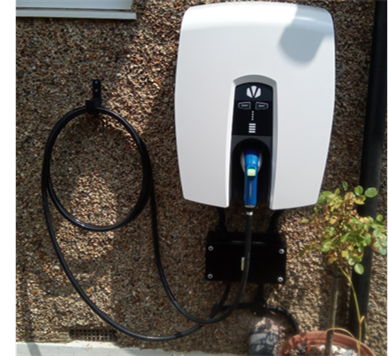 As part of the project, Indra designed and manufactured a wall mounted domestic V2G chargepoint that was CHAdeMO and CE certified and tested to the standards required for connection to the distribution network.

Participants in the project already had their own compatible EV (a Nissan LEAF or eNV200 van). They were provided with a free V2G chargepoint, but as a condition of the trial they needed to switch energy supplier to OVO Energy. This was so that the energy optimisation achieved by the V2G units could be monetised. The participants were put on to a special electricity tariff, where any energy exported from the property was credited to them at 30p/kWh (or 26p/kWh if they had existing solar PV installed).

Participants were provided with a mobile app which allowed them to set schedules for when they would like their EV to be fully charged, as well as setting a minimum and a maximum State of Charge (SoC) to ensure that the V2G unit operates within their preferred limitations. This gives users greater control by giving them the power to ensure that the vehicle will be available in an emergency, such as setting the minimum charge to whatever would be required for a trip to the local hospital for example. Additionally, the participants had a boost button, both in the app and on the V2G unit itself. This would override any other charging optimisation and immediately start charging the EV to the maximum SoC. 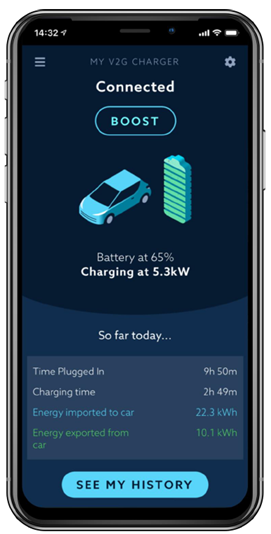 The actual optimisation of the V2G units was performed remotely by Kaluza’s ‘Intelligent Energy Platform’. This controlled charging and discharging of the units in a coordinated way to minimise energy purchase costs for the energy supplier in the spot electricity wholesale market. It is this cost optimisation in the wholesale electricity market by the energy supplier, that enables savings to be passed on to the customers.

The resulting customer proposition was simple and easy to understand; you get credits for exporting energy, the V2G functionality is handled for you, and you retain control of when your vehicle is charged.

This still provided enough freedom of the EV’s charging to be optimised to make significant cost savings for the energy supplier. An algorithm of discharging at peak energy times also helped to keep the grid in balance and reduce carbon emissions.

In the trial, the V2G units were able to create between £230 and £300 of value per year through the spot electricity market via the Intelligent Energy Platform. In the future this is likely to be able to grow to around £500 per year when combined with flexibility services.

During the trial 75% of participants plugged in their EV after every trip. This is much higher than most EV users, who typically plug in to a home chargepoint about once every three days. Use of the V2G technology by participants during the trial alleviated most of their concerns about it. Before the trial, participants worried about V2G being unreliable, their EV not being charged at the right time, or the effect on the health of their battery. At the end of the trial, these concerns were vastly reduced.

Cenex also did some extensive analysis of the data collected from the V2G units during this trial. From this analysis we were able to draw the following key conclusions:

Now you’ve found out a bit about this V2G trial, and how it worked, is this a trial that you would have liked to be a part of? Or do you think the technology is not yet ready? Put your thoughts down in the discussion below.