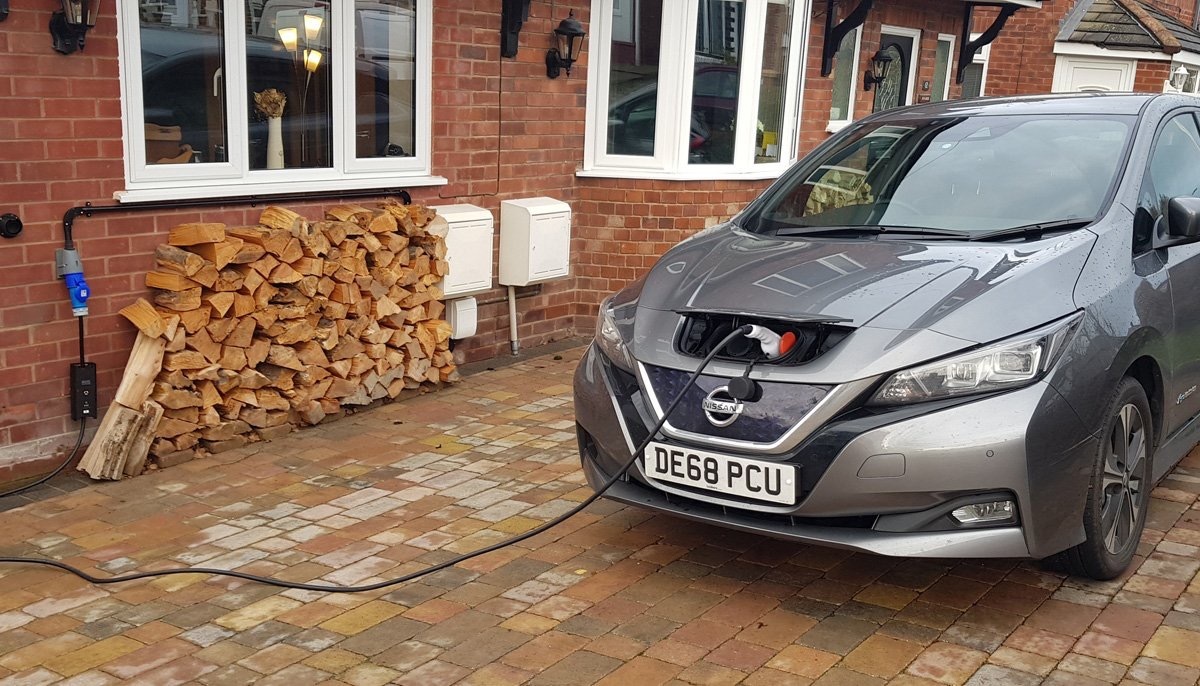 The Vehicle to Home (V2H) and Vehicle to Building (V2B) use cases are very similar, so we will look at these together in this step. In fact from a technical perspective they are identical, but both terms are used within the industry.

In these use cases the V2G chargepoint connects behind the meter of an existing home (V2H) or building (V2B). This means that electricity from the electricity network flows first through the electricity meter and then into either the building or to the V2G chargepoint. When the EV discharges via the V2G chargepoint, electricity flows into the building but does not go past the meter on to the wider electricity network. A system could be arranged like this, as opposed to the arrangement we saw in the V2G use case, for several reasons. Firstly, because there is sufficient electricity demand in the building to consume all the energy exported from the EV. And secondly because the grid connection to the meter prevents any export of electricity from the site (or perhaps simply prevents payment for any energy exported). The physical configuration of the system here is identical to the V2G use case, the only exception is that the control system or energy meter prevents export of energy to the wider grid.

The target sites in this use case are clearly homes and buildings where V2G chargepoints could be accommodated.

Why is it useful?

Secondly, it can help with the self-consumption of local renewable generation. If the building has solar panels installed, excess generated energy (i.e. energy not consumed by the building) can be used to charge the EV. Then, at times when the solar generation drops, the EV can be discharged to help meet the building demand. Often electricity market arrangements result in it being more valuable to consume locally generated energy on-site, rather than exporting to the grid as per the V2G use case we saw in the previous step.

Thirdly, it can help manage import electricity constraints. On some sites, the maximum power that can be imported to the site is capped by the DSO. Alternatively, there may not be a firm cap, but a cost for importing based on the maximum power (i.e. a capacity charge). The EV can be discharged at times when the building is using a lot of electricity and thus reduce the imported power. This can free the building up to consume more energy at that time if it needs to, or alternatively reduce the capacity charge.

Finally, V2G had its origins in providing power to homes at times when the grid had failed. Whilst this is not a common use in projects and applications to date, this is still a potential application of the V2H use case. However, there are often regulatory challenges in getting a V2G chargepoint to operate in a so called ‘islanded mode’, – providing power from the EV when grid power is lost.

How is it controlled?

In this use case the V2G system is not exporting energy onto the wider electricity network, but rather all the power is remaining on site. To control the system in an optimal way, the on-site demand and generation (if present) needs to be understood in addition to the electricity tariff. These calculations can be done by metering and control on-site without the need for communication to external data sources. This can result in a relatively simple solution of managing the control of the V2G chargepoint. A more sophisticated solution would incorporate forecasts of on-site energy demand and generation. These forecasts would be used to predict when the EV would need to discharge, or when it could charge up cheaply from on-site generation. This extra information can result in a more optimal use of energy and lower energy costs.

A real-world project where this has been done is project Piha. In this project, New Zealand energy company Vector is exploring how V2H can reduce strain on the grid at peak times by discharging the EV to the home and provide back-up power for homes during short term power outages.

What value do you think this use case for V2G charging could bring you? Put your thoughts in the comments below.