In 2017 global pig meat production reached 120 million tonnes. China is the major producer at 54 million tonnes, followed by the EU with 24 million, the USA with 11 million, Brazil and Vietnam and Russia with around 3 million tonnes [1]. Out of the five top producers all of them met their national demand except China, which relied on imports to maintain stock (EU pork accounted for 63% of China’s imports in 2018) [2].
© EIT Food

In 2017 global pig meat production reached 120 million tonnes. China is the major producer at 54 million tonnes, followed by the EU with 24 million, the USA with 11 million, Brazil and Vietnam and Russia with around 3 million tonnes [1]. Out of the five top producers all of them met their national demand except China, which relied on imports to maintain stock (EU pork accounted for 63% of China’s imports in 2018) [2]. 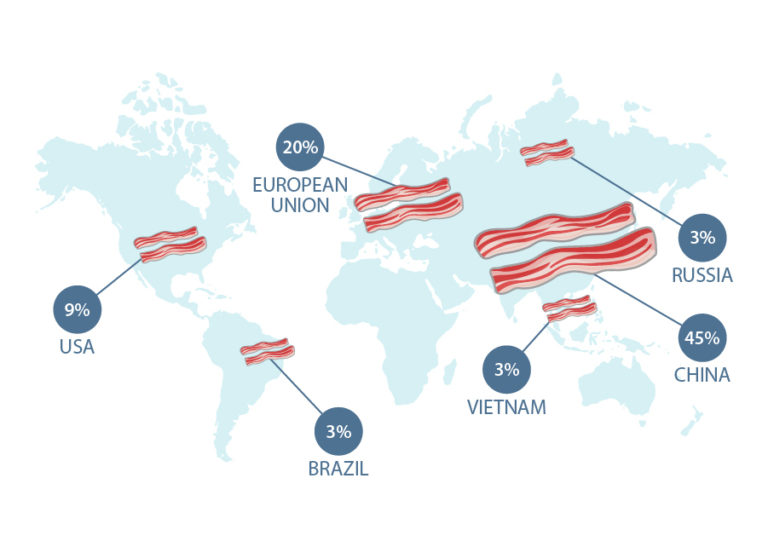 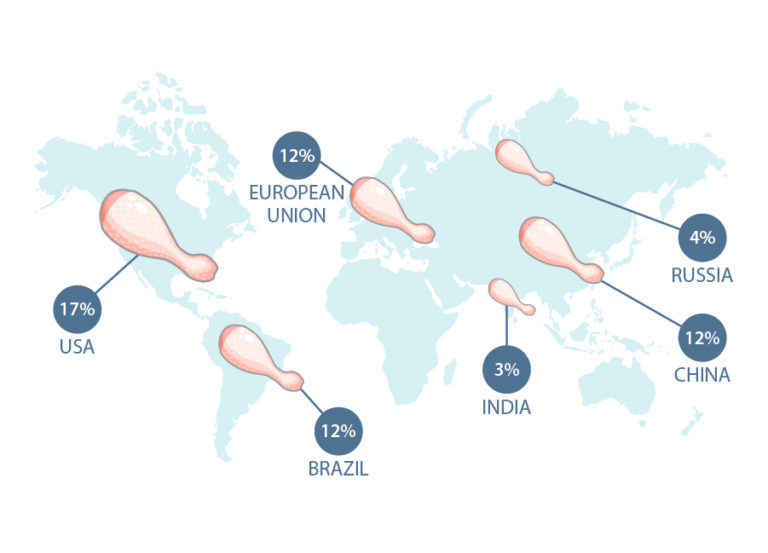 Cows, sheep and goats are ruminants which means they have an adapted digestive system allowing them to thrive on high fibre feeds such as grass and hay. Pigs and chickens are different. They are what we call ‘monogastric’ which simply means ‘one stomach’. Humans are also monogastric.

Monogastric animals have a simple digestive tract, although birds do differ from mammals as shown below. 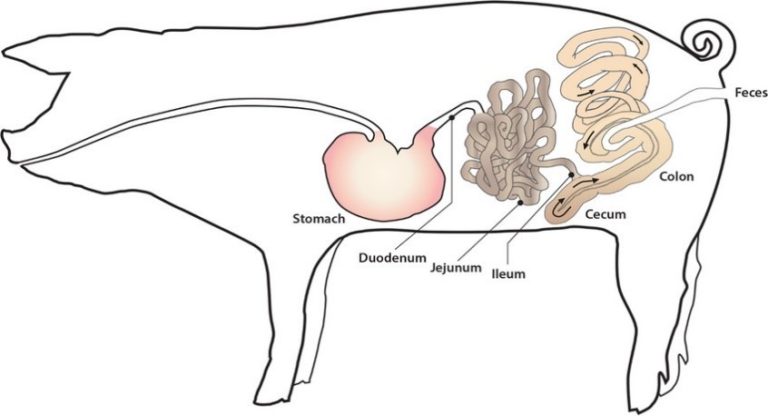 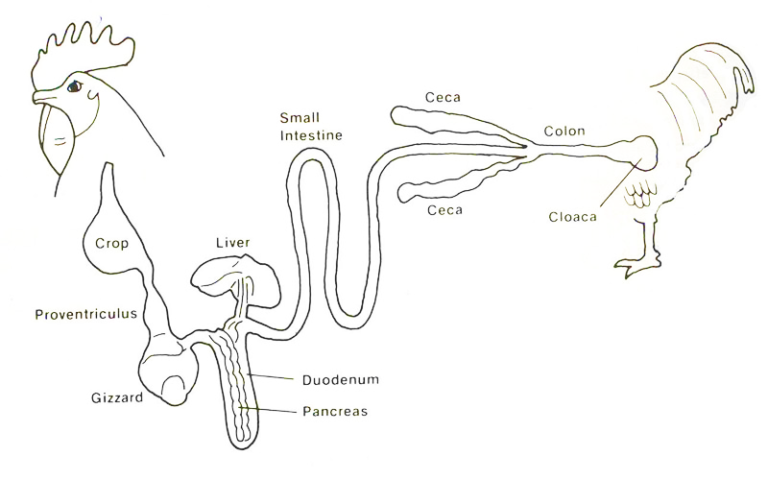 To be healthy and productive, monogastric animals require a diet that is higher in energy and protein and lower in fibre than ruminants. High energy and protein feeds for pigs and chickens include grains, maize and soybeans, which are also common constituents of the human diet. Buying in feed is the biggest cost for a pig (approx. 80%) or chicken farmer (85%) [5].

How is Pork Produced?

As for beef, there are two contrasting approaches to pork production, indoor and outdoor, depending on where pigs are born and reared. However, a combination of approaches is also used [6]. Factors that influence a farmer’s choice include geographical location, economics and consumer demands. Pig production consists of four main phases: breeding, farrowing and weaning, nursery, and growing/finishing [7].

In ‘outdoor reared’ pork, pigs spend approximately 50% of the production cycle outdoors, with the finishing phase usually taking place inside straw-based barns [8]. Standard pork tends to come from pigs that are housed indoors throughout the entire production cycle.

This table summarises some key features of indoor and outdoor systems:

As for all livestock farming, the efficiency of a farm can be calculated in many ways, eg

In pork production, farmers measure their pig herd’s performance in:

Farmers combine the data they collect to evaluate which aspects of herd management need attention in order to improve animal health and husbandry, as well as to cut costs.

As the cost of feed is so significant for pig and chicken farmers, they need to maximise the efficiency with which the animals use the feed for growth [11]. Soon after antibiotics were mass produced in the 1950s, small amounts were added to the feed of pigs and chickens to manage gut health and promote increased feed efficiency and growth [12]. However, with the increasing global threat of antibiotic resistance, feeding antibiotics to any farm animal for growth promoting effects was banned in Europe in 2006, although it is still common practice in some countries [13] [14].

Animal scientists are now developing safe alternatives and have focused their research on better understanding the biology of the gut in pigs and chickens, to find ways of improving their health without reliance on antibiotics [15]. Sick animals still receive antibiotic treatment if appropriate but focusing on strategies that promote overall animal health means therapeutic antibiotic use is reduced too.