The excavations by Grahame Clark at Star Carr. In this article Nicky Milner discussed the earliest excavations. 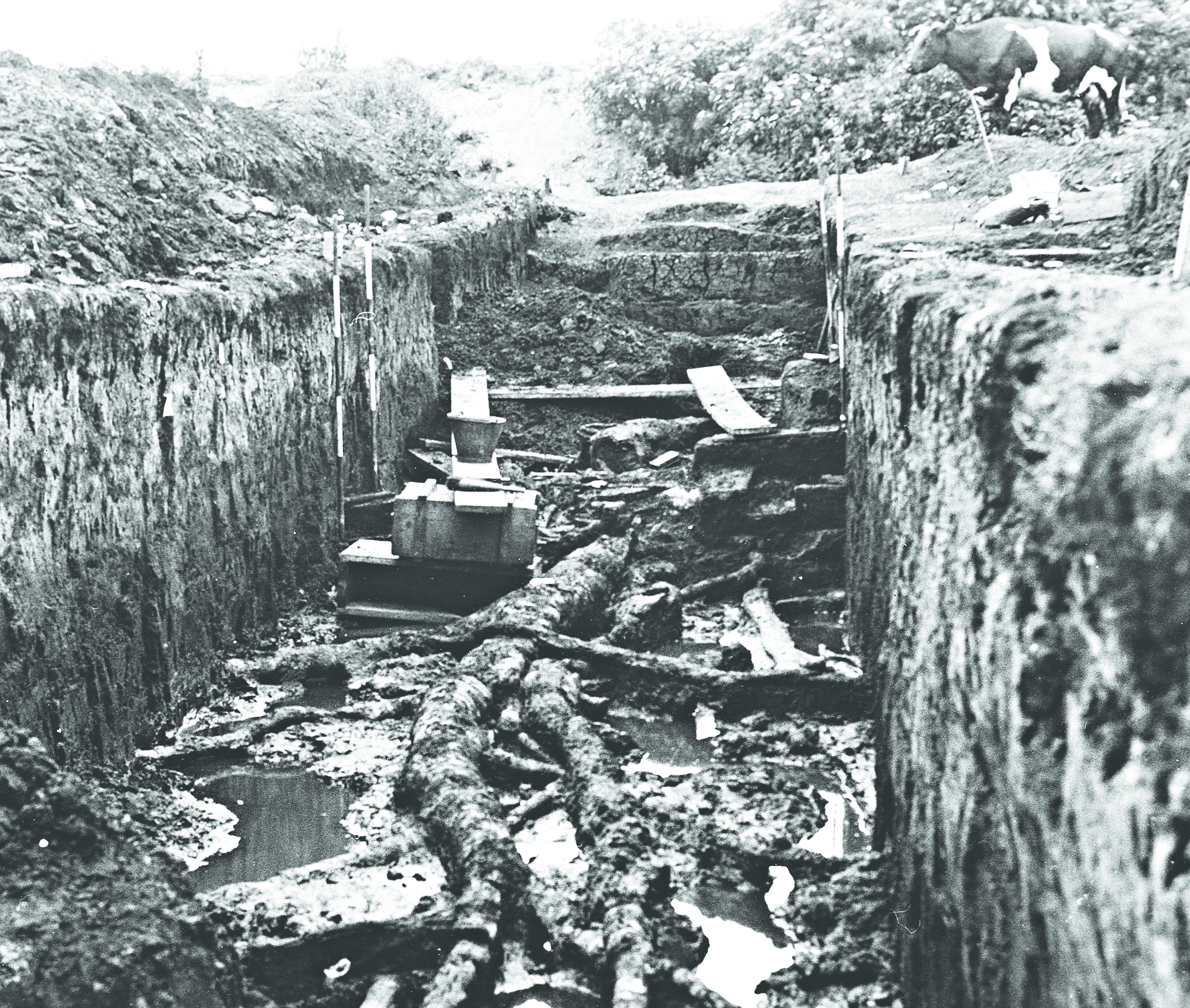 In 1949 Grahame Clark began his excavations at Star Carr. He brought with him mainly students from Cambridge, but a couple of local volunteers also worked with them. Post-war, the resources for such an undertaking were extremely limited. The conditions at the site were also very challenging. From Clark’s writings it seems that he did not particularly enjoy the ‘oozing mud’ and the horse flies! Certainly the trenches would have been extremely challenging. The peat was over a metre in depth and was waterlogged. This means that the trenches fill back with water and need pumping out from time to time. Steps needed to be made at each end of the trenches and boards were used for walking on where required.

With hindsight, we now know that Clark was extremely lucky in where he chose to dig. He chose an area which was extremely rich in artefacts, wood and bone – by far the richest accumulation of material at the site, and possibly in the whole of Europe. This material included vast numbers of animal bone – we don’t actually know how many pieces as a final number was not presented, and we know from our own excavations that some pieces were thrown back into the trenches at the end. However, the number is in the thousands, and the animals include: red deer, roe deer, aurochs (wild cattle), elk, wild boar, wolf, fox, dog, hare, beaver, badger, hedgehog and a range of birds. Much of this was thought to be food waste. Similarly, there was a large collection of flint, though again we don’t know the exact number of pieces, made up of a range of tool types such as microliths, scrapers, and axes.

However, possibly the most exciting finds were the artefacts which were found – as organic materials usually do not survive on archaeological sites of this age these were incredibly rare. A total of 191 barbed points were found which constituted more than 95% of all barbed points known in this country. These are pieces of antler which have been carefully carved down and would have been used in hunting and fishing. One of these had a hole in the end and is technically termed a harpoon, because a line could have been tied to it and these are traditionally used in sea hunting for animals such as seals.

In addition, 21 antler frontlets were found. These are made out of red deer skulls with the antler still attached but worked down on the inside, presumably to make them lighter. Many of them have holes perforated into them and these holes are thought to be used for tying them onto people’s heads. These finds caused a sensation because they are so rare – no others are known about in Britain, and only a handful have been found in Northern Germany.

Clark also found a few pieces of amber, one of which had several perforations and had clearly been used as a bead. These have clear parallels with amber pendants found in Northern Europe. In addition, a number of shale beads were found including one in a pendant type shape.

Clark also found a layer of wood which he called a brushwood platform. Having re-excavated in this area, we now know that there was a layer of wood above the concentration of finds but it was a layer of roots from trees growing higher up. There was wood mixed up between the artefacts but this was not in any way a platform. However, there was a large birch tree that had been felled either by people or a beaver, and Clark interpreted this as some sort of way of getting out in the lake.

Clark made a number of important interpretations which have since been re-examined and challenged since the 1970s. Firstly, he considered this to be a dwelling with people literally living in the muds on the edge of the lake. Secondly, he believed he had excavated the extent of the site (based on finds distributions and compared to other Mesolithic sites in Denmark and Germany). Thirdly, he thought that four or five family groups had lived there on more than one occasion, probably only in the winter and spring (based on the presence of both shed and unshed antler).

Overall, Clark did an incredible job of excavating all of this material and publishing it very rapidly under difficult conditions in 1954. In the 1970s, he wrote about the site again, rethinking some of his ideas. In particular, he argued that Star Carr was part of a seasonal pattern of settlement in which Mesolithic people lived in the winter, but then moved into the higher areas of the North York Moors in the summer, following herds of migrating deer. This reinterpretation led to a number of other papers, published by others (including some of his students) who came up with other theories, such as it was a base camp, a hunting camp, a kill site or even that it was used for tanning hides. Other papers argued about whether it was occupied in the summer or the winter. A paper was written speculating on why no fish were found at the lake. Another short monograph presented the results of a re-evaluation of all the faunal remains demonstrating that bear was also present at the site.

There are no archives for Clark’s excavations. In those days it appears to have been normal to destroy them once the publication was complete. One of the really difficult things for us has been studying the artefacts and bones found from the original excavations because they were scattered between a number of different museums, primarily the Museum of Archaeology and Anthropology Cambridge, the Natural History Museum, The British Museum and Scarborough Museums Trust. However, some artefacts are also on show at the Yorkshire Museum and Whitby Museum, and it appears that the primary museums lent or gave away a number of artefacts to museums all around the world (material from Star Carr was recently found in a museum in Ghana!). As part of our project we tried to collate information on where most of the material was and there is a catalogue on the Archaeology Data Service (go to the query screen, select the artefact type you are interested in, or the museum you are interested in, and click ‘submit query’ to see images and basic information).

Clark’s excavations were incredible for the time and the book he produced was groundbreaking, but the fact that the archive was destroyed and that much of the assemblage was distributed far and wide makes reinterpretation very difficult for current and future researchers. What are your views on this?