Samples from the site - both artefacts and sediments - have been used for dating Star Carr. Here Professor Nicky Milner discusses the recent results 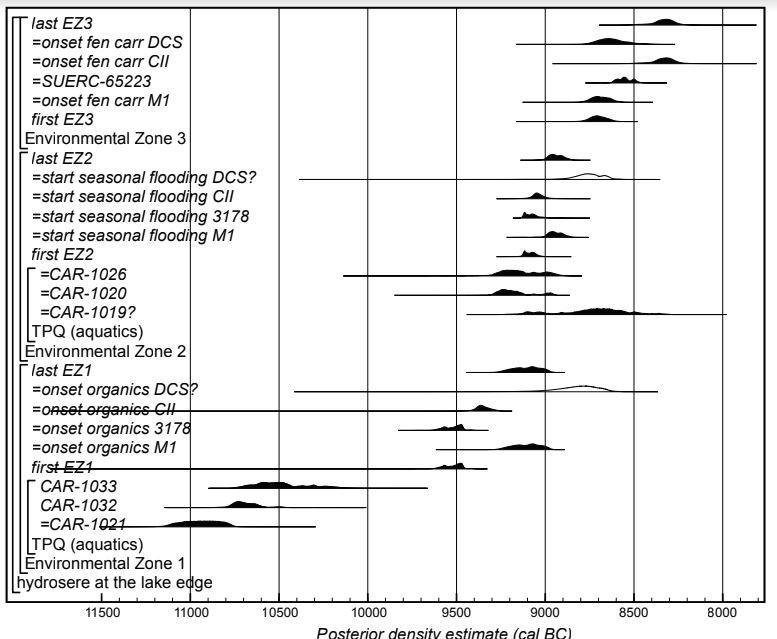 Understanding the dating of the site has always been a key issue in the interpretation of Star Carr. When did people live there and for how long?

During the time of the original excavations, radiocarbon dating was still in its infancy. Clark relied more on pollen zonation to date the site – i.e. matching up the pollen records at Star Carr with well known sequences of pollen across Europe. Based on pollen analysis by two experts, Walker and Godwin, the site was dated to the end of the ‘Preboreal’. This is a period of time after the end of Last Ice Age and at the start of the Holocene (the current Epoch, beginning at about 9650 BC). In addition, two of the first radiocarbon measurements ever undertaken in Britain were obtained on material from Star Carr and these supported the idea that the site dated to the Preboreal.

One of the problems in attempting to date Clark’s material in later decades was that he had conserved much of it and these conservation methods contaminated the materials meaning they were impossible to date. However, following the 1980s excavations some artefacts and sediments were dated from the site suggesting that the site had been in use for about 300 years between 8700 and 8400 BC.

Our more recent excavations and funding from Historic England have allowed us to carry out more dating with world leading expert Professor Alex Bayliss. From a detailed analysis of 223 dates from the site – some from artefacts and some from the sediments – we now know that people were present at the site for a period of over 800 years, from about 9300 BC. This is an extremely long period of time and it is remarkable to think that people were there for so long.

We have been interested in trying to understand what people were doing over this period, but we have also been able to find out more about climate change at this time as well.

Chapter 17 provides a very detailed explanation of how the dating was carried out.