Flint at Star Carr: where did it come from? What was it made into? In this article Professor Nicky Milner explores the evidence from recent research. 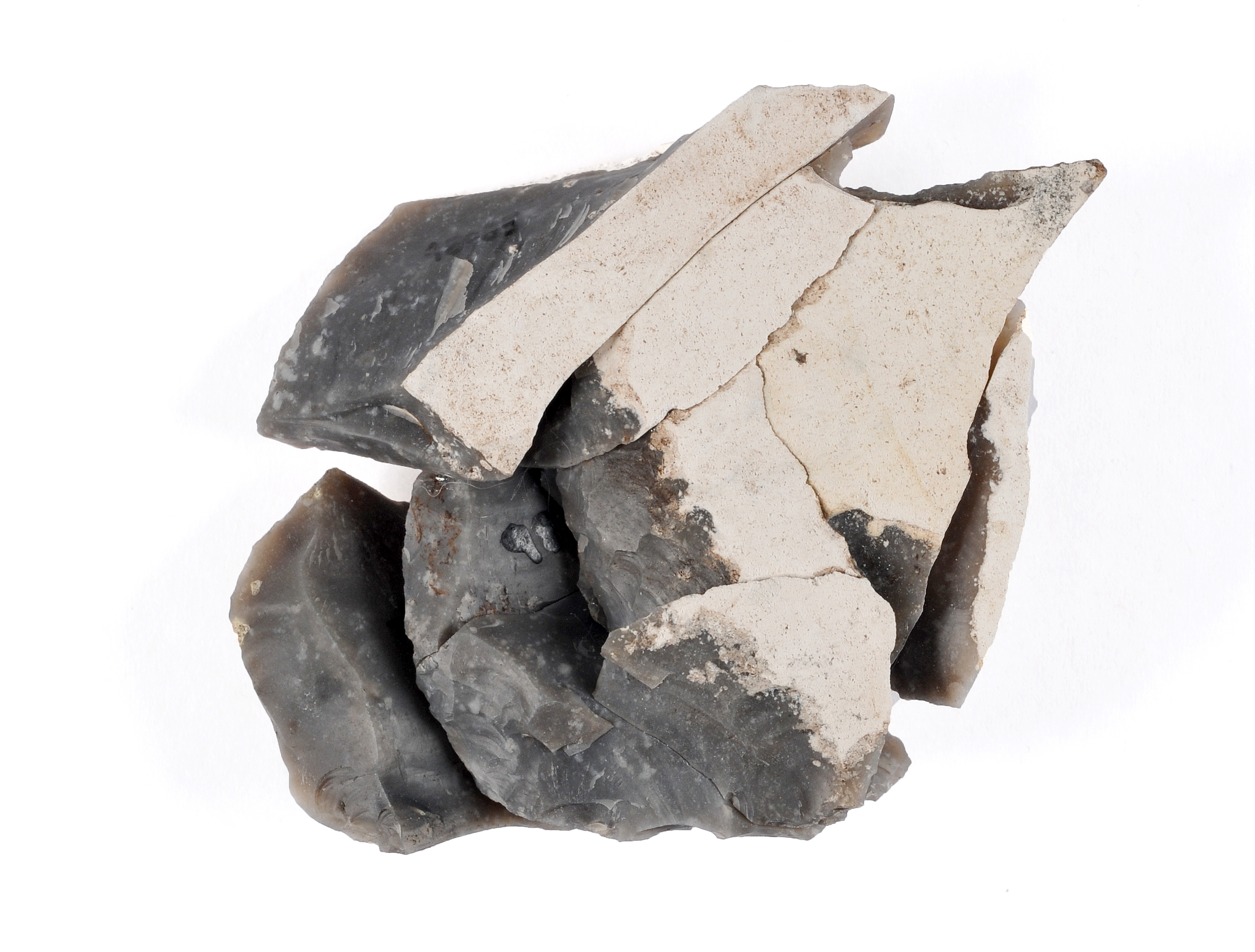 Flint is a sedimentary stone usually found as nodules in chalk. Flint can be a range of colours including black, grey, brown, green, orange or white. It usually has quite a glassy appearance once it has been broken. There is usually a thin layer on the outside of the nodule called a cortex which is white and chalk like in appearance. At Star Carr, flint was mainly sourced from glacial clay (known as till) but also some flint was from the Yorkshire Wolds to the south. Most of the till flint was probably picked up as pebbles on the beach, or from river banks.

When flint has been struck with a hammerstone, or sometimes in the Mesolithic with a piece of antler, pieces of flint come off the larger nodule as blades or flakes. These struck pieces have edges which are sharper than surgical steel and great care needs to be taken when knapping to avoid accidents (this is not something to try without a specialist to hand). These struck pieces could have been used immediately to cut meat or cutting down reeds. However, these people also learnt how to create more specific tools out of the flint.

One of the key tools was the microlith. This is a small piece of flint which has been created out of a blade and they are often triangular in form. They could have had several uses, but they are often thought to have been used to make arrows. We usually don’t find many arrows on archaeological sites, but from the ones which have been found, they generally have a point on the end of the arrow shaft and several microliths embedded down the side to create a sharp edge.

Another form of tool which has been found at Star Carr is the axe. These are made from nodules or large flakes of flint and through their use we see evidence that they have often been sharpened by removing more flakes.

Other tools often found on Mesolithic sites are burins (which were often used for scoring antler or boring holes in things like stone beads), scrapers (for scraping hides) and strike-a-lights (used for making fire).

Overall, we found 24,883 pieces of flint from the site. This is obviously a huge number and every single piece is analysed by a specialist who records its features and whether it is a specific type of tool. Once the tools have been analysed, a programme of refitting can be undertaken in order to understand knapping sequences and the movement of material around the site. This is ideally suited to people who enjoy jigsaw puzzles as it mainly requires the researcher to lay out the flint (usually from each metre square that was excavated) and try and fit back together some of the sequences. Dr Chantal Conneller, who was the flint expert for Star Carr, managed to refit large quantities of the flint, showing that for instance, knapping activities were being carried out within one of the houses. In addition, we discovered what was thought to be an axe workshop – here six axes and a large amount of manufacturing and resharpening debris was found. Through refitting she could see that one axe had been extensively reworked, lightly used and then discarded, and a further two had been reshaped, resharpened and discarded.

Overall, looking at the spatial patterning of flint across the site (that is the places where the flint has been discarded), the distribution of the stone tools, and the patterns from refitting, we can begin to see activity areas in different places and sometimes get little glimpses into the tasks that people were performing 11,000 years ago.

You can find out more about the flint from Chapter 8 and Chapter 35 in the Star Carr books.