This article presents Ford and his particular focus on efficient and streamlined production, which was later called Fordism. 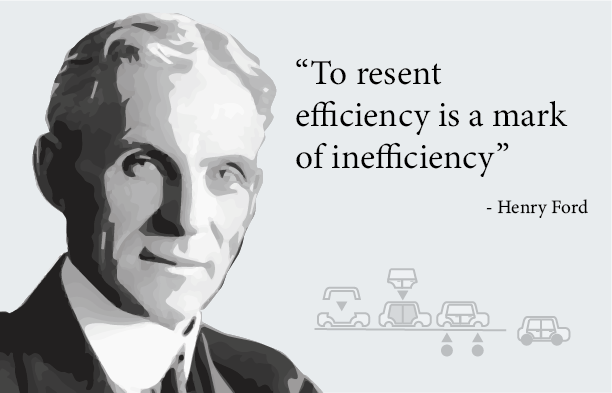 Who was Henry Ford?

Henry Ford was the founder of the Ford motor company and made significant contributions to the development of production systems.

A famous saying from Ford is found in his book from 1922, My life and work, in which he writes that a worker in Ford’s car factory shall be able to afford the car he makes. He also famously stated that people can buy the T-ford in any colour they like, as long as its black, which hints at the limitations of his techniques.

Ford managed to make this a possibility by utilising assembly lines, division of labour over different stations, standard components (like Eli Whitney used for the muskets as discussed in a previous step) and control over the entire production process/factory system.

Some of the important principles that Ford held were:

Fordism was essentially the idea of maximising the benefits of large-scale production.

While Fords system was very efficient compared to previous systems that had come before it, it also had some problems.

In your opinion, what are the pros and cons of Ford’s system and “Fordism”? Do you have any ideas for improvements that you would make?

Please write your answer in the comment section and discuss with other students.