Snowball Earth and the rise of oxygen

Read about the relationship between Snowball Earth ice ages and the rise of oxygen in the atmosphere.
© Cardiff University

The extreme conditions that Snowball Earth’s brought about seem contradictory to the development of life.

But, one of the most fascinating aspects of these events is the relationship between them and the evolution of life.

Life was already present at least at 3.5 billion years ago, long before the first Snowball Earth glaciations (between 2.4 and 2.1 billion years ago). These lifeforms did not require oxygen to breathe. Life was mainly microbial, including microorganisms that make methane and those that respire methane.

Evidence shows that following the freezing over of the entire Earth, for some reason still unclear to us, there were two great rises of oxygen and Earth emerged during those periods into oxygen-rich conditions.

The first rise is known as the Great Oxidation Event (GOE) and it occurred at the same time as the first Snowball Earth 2100-2400 million years ago. The amount of oxygen rose from near zero to make up about 1-2% of the atmosphere.

One of the key species during the first Snowball Earth, were the cyanobacteria. These microorganisms developed the unique ability to combine CO2 from the atmosphere with water, using sunlight energy.

This produced organic matter and importantly the waste product of this reaction is oxygen. This process is called oxygenic photosynthesis and it produces all of Earth’s oxygen.

Cyanobacteria became so successful in producing and releasing oxygen during Snowball Earth, that they were responsible for this first significant rise of oxygen in the atmosphere.

This event also led to the emergence of new types of life that respire oxygen near the surface of the early ocean.

At the time, the deep oceans were free of oxygen and only harboured a type of oxygen-independent microscopic life. No complex organisms and land animals existed yet.

A second rapid rise in atmospheric oxygen levels occurred between 700-541 million years ago. This is known as the Neoproterozoic Oxygenation Event (NOE).

This coincided with the second and third Snowball Earth glaciations occurring around 715 and 635 million years ago. The simultaneous increase in oxygen was a precursor to the emergence of more complex life forms that are visible to the naked eye, referred to as the Ediacaran Biota. 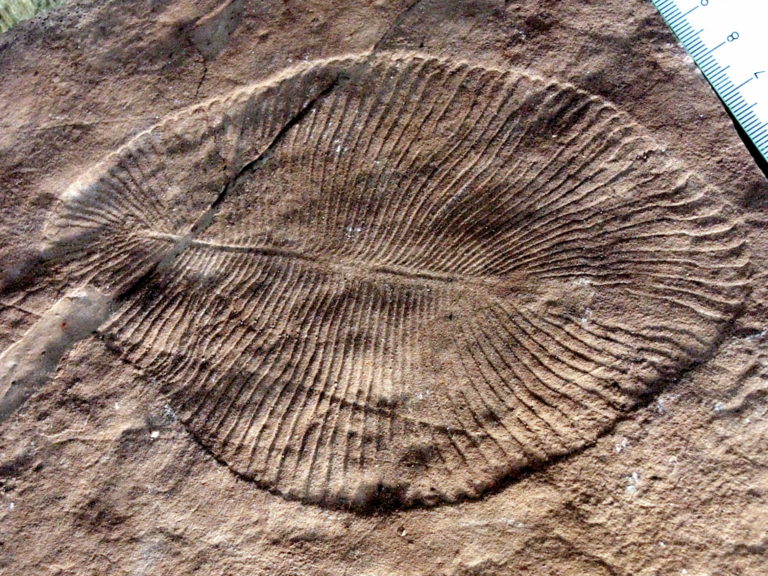 An Ediacaran organism by Verisimilus is licensed under CC BY-SA 3.0.

Fossils have been discovered that show traces of the first animal-like life that evolved between 575-542 million years ago. They are believed to be linked to special conditions created by the Snowball Earth glaciations just before this time period.