The explosion that created our Solar System

Read how elements formed into the Earth, planets and solar system.
© Cardiff University

In the previous step we looked at the importance of the formation of light and then heavier elements.

Elements can join together in millions of different combinations and are the ingredients of all the substances in the universe and on Earth.

Here we will explore how elements formed into the Earth, planets and Solar System.

The creation of the Solar System

Our own Solar System was created as a result of the extreme event of an exploding star nearly five billion years ago. This energetic explosion at the end of a star, ejected elements and they spread as cosmic dust.

As the temperature started to cool the cosmic dust began to cluster together due to gravitational forces and the attraction of mass. The result was the formation of the Sun, which is the central star and centre of gravity in our Solar System, and a string of planets orbiting around it.

The relative distance of each planet from the Sun is due to the unique combination of elements of which each planet is made up. Planets that consist of heavier elements are closer to the Sun because the heavier something is, the more difficult it is to move away from the centre of gravity. 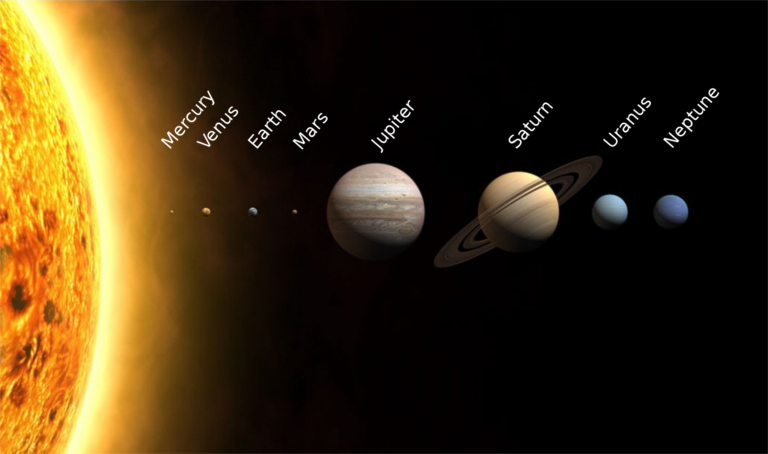 Planets in the Solar System by WP is licensed under CC BY-SA 3.0.

The outer so called ‘gas planets’ of Jupiter, Saturn, Uranus and Neptune are predominantly built by lighter elements.

We also see differences in the size and density of both types of planet due to the elements of which they are made up. The internal gravimetric pull of each planet results in the inner ‘rocky planets’ being smaller and denser than the outer ‘gas planets’.
So the elements that planets consist of directly influences where they are located in the Solar System and their size and density.

Is our planet the result of an extreme event?

We’ve briefly covered how Earth was formed. But, just how rare is the formation of a planet?
There has been massive progress over the last 50 years in trying to answer this question. In 1995, the very first exoplanet was discovered. This is a planet outside of our own Solar System.
As detection tools evolved and became more precise, lots of exoplanets were discovered and scientists started to realise that planets are not rare in our Milky Way.
To date, nearly 4,000 planets have been detected, which has led to the estimate of about 200 billion planets in our Milky Way.
So it would seem that the formation of stars (sequence stars to be precise) nearly always generates the formation of planets.
Earlier we considered two timescales for observing events:

A timescale that begins from the very start of the universe, believed to be 14 billion years ago.

A timescale that begins from the formation of the Earth, believed to be 4.5 billion years ago.

From a cosmological point of view, the formation of a planet does not seem to be an extreme event. It appears to be a relative frequent event in the history of our universe.

However, from a geological point of view, this event created the unique planet on which we live and it marks the start of geological timescales. This extreme event is also associated with massive amounts of energy and extraordinary violence beyond our imagination.