Read about the causes of earthquakes and geological faults.
© Cardiff University

We’ve considered where earthquakes strike and some of the reasons for that.

Now we’re going to delve more deeply into the causes of earthquakes.

A simple definition of earthquakes is:

the sudden and catastrophic failure of rocks under stress caused mainly by collisions where two plates meet at plate boundaries.

Just like pulling an elastic band, rocks can accommodate a certain amount of deformation. But, when this becomes too great the elastic band (or rock) snaps. This is exactly what happens in the event of an earthquake.

Following this, energy is released and travels out in a wave causing the ground to vibrate.

To understand how we determine the size of an earthquake we first need to consider what we mean by a geological “fault”.

A fault is a crack in Earth’s crust, typically occurring at plate boundaries. It is where two blocks of Earth have been dislodged from one another.

An earthquake occurs when these two blocks suddenly slip past one another, this could be horizontally or vertically. The area where they slip is called the fault.

A slip leads to a sudden release of energy from within the Earth and this results in shaking or vibration we associate with earthquakes.

The main types of fault are normal, reverse and strike-slip faults

These are usually found at divergent plate boundaries, this is where plates move away from one another. This type of fault is where one block slips vertically downwards relative to the other.

These are usually found at convergent plate boundaries, where plates collide. This type of fault is where one block moves vertically upwards relative to the other.

These are usually found at transform plate boundaries, where two plates slide horizontally past one another. This type of fault is where one block slips horizontally relative to the other.

Earthquakes have an epicenter and focus (or hypocenter). The maximum intensity of an earthquakes usually occurs at the epicenter. 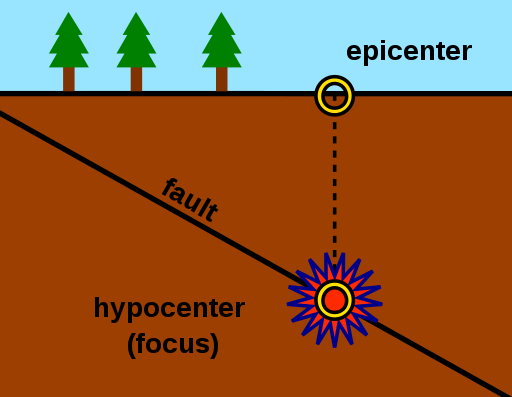 Diagram of the epicenter of an earthquake in relation to its hypocenter/focus point by Sam Hocevar is licenced under CC BY-SA 1.0

The point on the Earth’s surface located directly above the focus of an earthquake.

The location where the earthquake begins. The ground ruptures at this spot, then seismic waves radiate outward in all directions.

In the next step, we’ll start looking at some specific examples of earthquakes.