Read about the differences between regular and extreme volcanic eruptions. Read definitions of supereruptions and large igneous provinces.
© Cardiff University

Just like earthquakes, there are regular and extreme versions of volcanic eruptions.

Although earthquakes and eruptions are very different processes, they both share the fact that the largest events are also the rarest events.

To explain extreme eruptions we have to again make a distinction between effusive and explosive eruptions.

Extreme explosive eruptions are referred to as supereruptions and just like earthquakes the distinction between extreme and regular eruptions is slightly arbitrary.

Supereruptions are VEI 8 eruptions. This means they erupt more than 1000 km3 of tephra.

The characteristics of supereruptions are like other explosive eruptions such as the 79 AD eruption of Mount Vesuvius. They are, however, much larger.

Supereruptions are at least 250 times larger than the 79 AD Vesuvius eruption.

The last supereruption to occur was at the dawn of human civilization about 10,000 years ago.

In the last 10,000 years there have been only four VEI 7 eruptions and no VEI 8 eruptions. Looking over longer timescales, we find evidence for VEI 8 eruptions, but they happen roughly once every 100,000 years.

Perhaps the most well-known volcano that has produced a supereruption is Yellowstone in the United States. In fact, it did it multiple times, with the last one occurring about 600,000 years ago with an erupted volume estimated around 1000 km3. It is known as the Lava Creek Tuff. 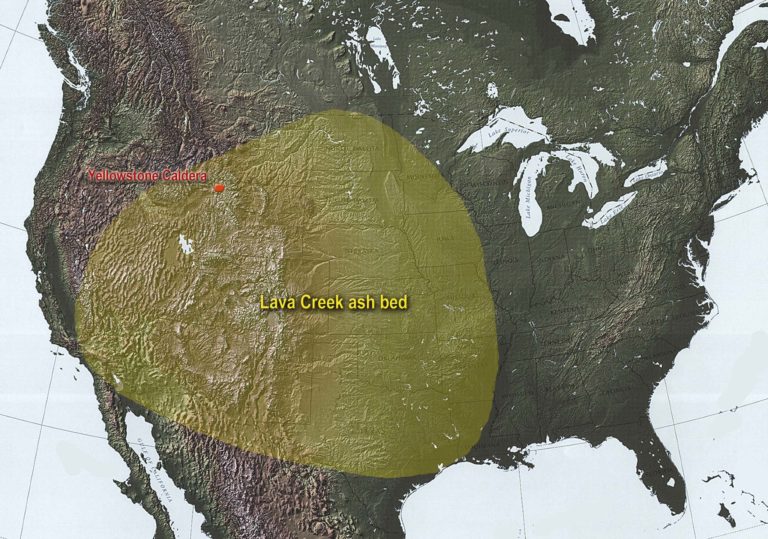 The volcano has produced many eruptions since, but they are much smaller in volume and the last one occurred about 70,000 years ago. It is very common for volcanoes that produce very large eruptions, to also produce smaller eruptions.

Extreme effusive eruptions are called large igneous provinces and are defined according to the 3 parameters below.

– The area covered by lava is greater than 0.1 million km2

– The erupted volume is greater than 0.1 million km3

– The duration of the eruptions is less than 50 million years.

These are staggering numbers in comparison with the Pu‘u ‘Ō‘ō eruption we looked at in the last step.

They are even rarer than their explosive counterparts and only occur once every 10 million years.