Level 4: The co-branding partnership: The Sims4 (EA) and Moschino by Jeremy Scott

The Art of Collaboration 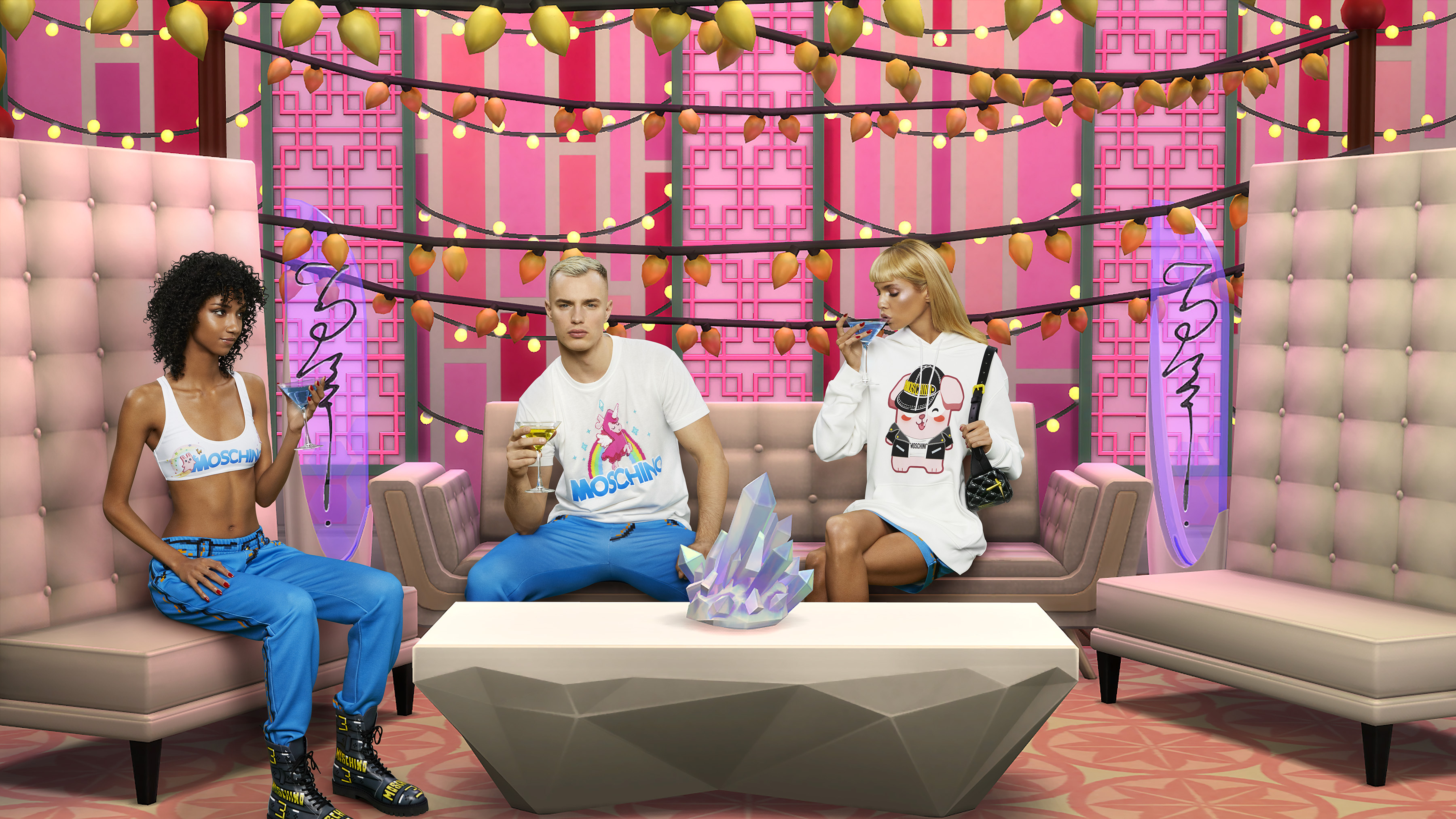 Jeremy Scott, the fashion designer in charge of Moschino from 2013, developed a narrative story since his arrival.

From junk culture and fast food with McDonald’s golden arches[64], to Chanel-lined suits and shoulder bags matelassé[65] (2014). From the dedication to Barbie[66], Mattel’s plastic toy (2015), to the contemporary Jackie O[67], which looks alien during the day, and in the evening turns into Marilyn Monroe (2018)[68]. It was not surprising, or probably it was for those who are not familiar with the brand nor the American designer, to see the birth of an, allow-me to say, one-of-a-kind collaboration between the Fashion House and Electronic Art (best known as EA). What is EA? Electronic Arts Inc. is a global leader in digital interactive entertainment. EA develops and delivers games, content and online services for Internet-connected consoles, mobile devices and personal computers, counting more than 450 million registered players around the world[69].

Do you expect to see something similar to what Louis Vuitton has done for LoL? Of course not. There is no possibility of making a comparison at the time, the companies and the kind of collaboration are completely different. In April 2019, Moschino entered into the world of The Sims 4, one of the titles owned by EA. Using the official definition from the website to describe the game: “The Sims is the life simulation game that gives you the power to create and control people. Experience the creativity, humor, escape, and the freedom to play with life in The Sims 4. Try the Create A Sim demo to create your own Sim!”[70]. I invite you to discover the game by watching the video published on the official YouTube account:

How did Moschino collaborate with The Sims 4? First of all, via the Moschino x The Sims Pixel capsule collection: a fashionable capsule collection tied-up with the archetypal simulator game. Mr Scott created a communication campaign where models acted and were dressed in “The Sims” style as you can see by watching this video:

Social media sponsored posts were published on Instagram and Facebook too. Also EA published the launch of the “Moschino x The Sims 4 Stuff pack”:

From t-shirts, jeans, dresses and bodysuits, the collection also included the plumbob (as a pattern for umbrella or earrings) – the green floating diamonds that appear above the Sims heads priced from 500 euro for the hoodie up to 1000 euro for the backpack[71]. The timing was good as the collection came out as The Sims prepared to celebrate its 20th anniversary in 2020. The move was described by the Press as highly successful and clever by Sims’ producers from a business perspective. As discussed previously in the Louis Vuitton example, players want to resonate their Sims’ look in real life. Jeremy Scott, Creative Director of Moschino stated in an interview for Fucking Young on 13th of April -date of release of the collection: “I love the idea of being able to imagine, design and bring to life a world of individual personas with The Sims universe. That concept emulates what I get to do for each collection at Moschino as I create a fantasy universe of spectacular storylines and characters”[72].

From a communication perspective, the collaboration illustrates once again the interest in gaming from fashion brands, however, this co-branding was not welcomed by the majority of the gaming community once the “stuff pack” came out[73]. The game side of the collaboration came later that year, and it was packaged up with the game’s funky rebrand. As you have seen, the trailer was unlike any other seen before. If you want to know the community’s thoughts, “all you need to do is watch the EA Play live stream footage that shows an almost non-existent reaction to the Moschino Stuff Pack announcement and compare it to the excitement that descends when it’s announced that the pack that follows it will be called Realm of Magic”[74]. The “stuff pack” enabled the Sim to be the photographer that has to take photoshoots for other Sims in various outfits on various sets, send them for approval and get paid.

Share you response with your peers in the comments below.