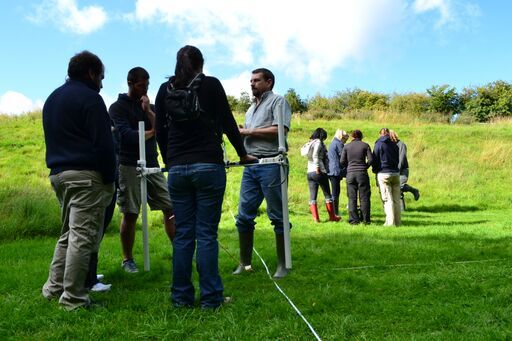 Duncan Hale (Archaeological Services, Durham University) has conducted geophysical surveys of sites throughout the world using a range of different techniques. He is used to working in different and challenging geological environments and searching for different types of features. Here he discusses the forensic applications of these techniques.

Geophysics is a form of remote sensing – it is a way of detecting ‘anomalies’ below the surface without physically disturbing the ground. Geophysics has been used in archaeology for many years, because it is a sensitive and quick way of surveying sub-surface features without the time-consuming, expensive and destructive process of excavation. It is being used increasingly in forensic cases because it is a way of conducting a rapid survey of sub-surface features and is also non-intrusive. Another advantage is that the survey data can be downloaded, processed and interpreted on site within a few minutes. 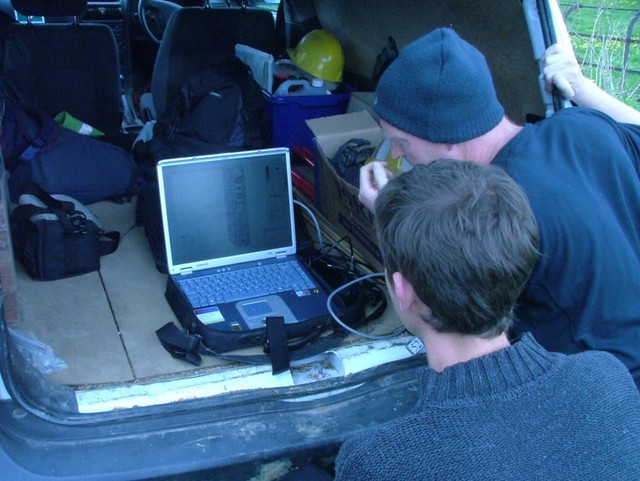 There are a number of different geophysical techniques. The most common ones being: 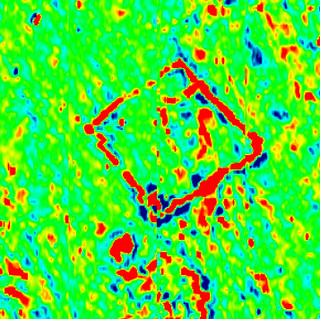 A geophysical image of a building located under the ground surface

Determining which techniques might be suitable for a particular search requires information about the specific situation.

Electrical resistance survey is ideal for detecting stone features such as walls, paths and culverts, but can also detect soil-filled features, depending on ground conditions at the time of survey.

The porosity of a grave fill in the first month after being back-filled can produce a high resistance anomaly – greyscales before/after grave digging.

Experimental work with pig carcasses has shown that decomposition fluids can make graves detectable as low resistance anomalies after the initial settling of the grave fill and for a few months thereafter. 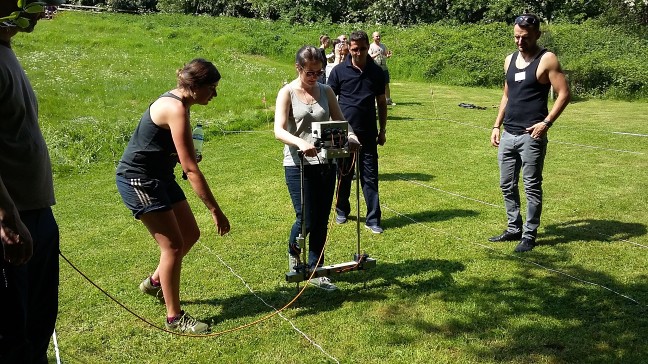 Highly sensitive magnetometers are used to detect and record anomalies in the vertical component of the Earth’s magnetic field, which are caused by variations in soil magnetic susceptibility or permanent magnetisation.

Anomalies can reflect, for example, ferrous (containing iron), stone, brick and soil-filled features such as graves and pits. The grave fill and/or ferrous objects within it can sometimes be detected by this method including weapons such as a knife or gun.

Duncan has also used this method in water to quickly detect a firearm thrown into a river when police divers were unsuccessful! 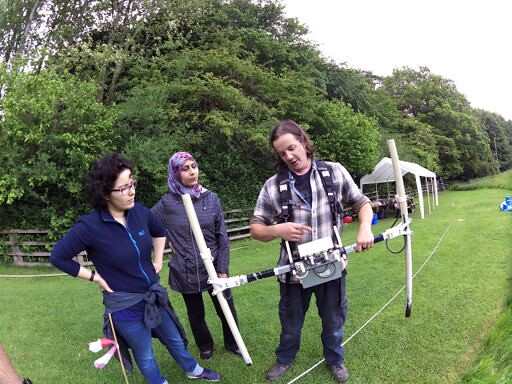 An instructor explains how to use a magnetometer. 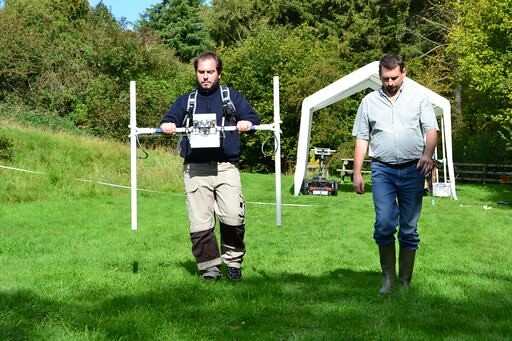 A magnetometer being used to assess variation in the soil.

This technique has been brought to public attention in the UK through high profile police cases such as the multiple bodies found buried in the garden of serial killers Fred & Rose West, Gloucester, 1994. Slightly more recently the technique was used to search for human remains at the orphanage of Haut de la Garenne in Jersey in 2008 and in 2018 at the mother and baby home in Tuam, Galway to detect the remains of infants deposited in underground tanks.

GPR works like bat sonar. It generates a short high-frequency radar pulse (radio wave) which is transmitted into the ground via an antenna; the energy is reflected by buried features and the return signal is received by a second antenna. The amplitude of the return signal relates to the electromagnetic responses of different sub-surface materials and conditions, which can be features of archaeological, historic or forensic interest. The time which elapses between the transmission and return of energy to the surface can be used to provide depth information.

Unlike the above electrical resistance survey and magnetometry, GPR does not measure the ‘bulk’ properties of materials. In certain ground conditions and antennae, this technique can detect sub-surface features such as mass graves at several metres depth.

GPR can be particularly useful in confined spaces and over concrete, where other techniques will not work. 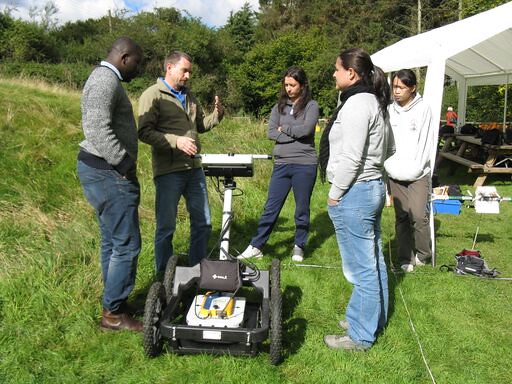 An instructor discusses how to use GPR.

Metal detectors can be useful for surveying potential sites before excavation, and for checking spoil heaps during excavation for any small metal artefacts that might easily be missed. In some situations, it may be worth using a metal detector to locate and remove ferrous objects prior to undertaking a detailed magnetometer survey.

Where on Earth are we?

With each of these techniques, data are collected in a systematic way, often using regular grids of, for example, 20 metres. Sampling intervals are usually determined by the anticipated size of the target. Higher-resolution surveys provide more information but are more time-consuming. This is however essential for smaller targets such as graves.

The use of geophysics in a forensic search programme requires the investigators to then test the anomalies which are detected. ‘Best practice’ follows a route from the non-invasive to the invasive in order to minimise loss of evidence, and is in accordance with Code B of the Police and Criminal Evidence Act (PACE; 1997), which requires investigations to be conducted with the minimum of disturbance to property.

Geophysics should not be used as a standalone technique in forensic investigations. Within archaeology, geophysical survey is integrated into wider search and excavation strategies and this provides a model of how it should be incorporated into forensic search and recover programmes. Every case is different; every situation is different. Geophysics in forensic investigations requires flexibility and adaptability, in both technique and methodology, to contribute most effectively.

It is also worth noting that as digital technologies develop rapidly there are new and effective methods being developed all of the time that will improve the search for grave-sites in the future.