Late-Fusing Epiphyses and the Ribs

How can age-at-death be assessed from ribs and late-fusing epiphyses? In this article, Dr Rebecca Gowland discusses these methods. 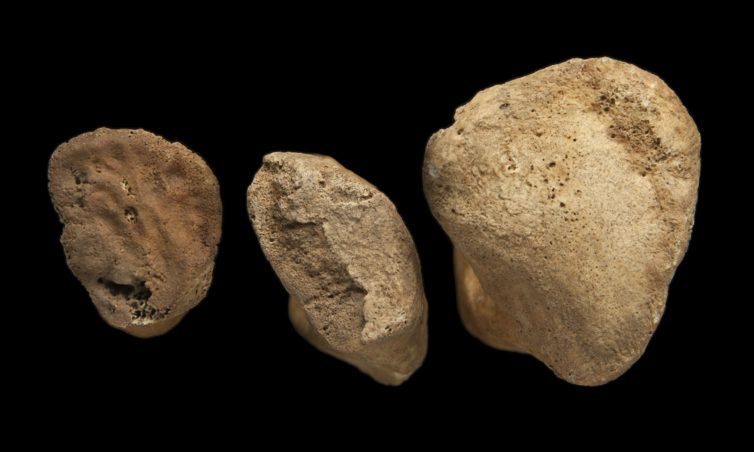 Age-at-death estimations are most commonly made using the pubic symphysis and auricular surface of the pelvis. However, several other methods are also employed, especially when the pelvis is not recovered or is too damaged for analysis. These typically include:

The identification of young adults can be achieved via the observation of late-fusing epiphyses, including the sternal end of the clavicle and the iliac crest of the pelvis mentioned in the video. Other late-fusing epiphyses include the first and second sacral vertebrae (late teens to early twenties) and the spheno-occipital synchondrosis (before 18 years of age). Examining whether or not these epiphyses have fused can be useful in attempting to assess age-at-death from bones which otherwise look fully mature. 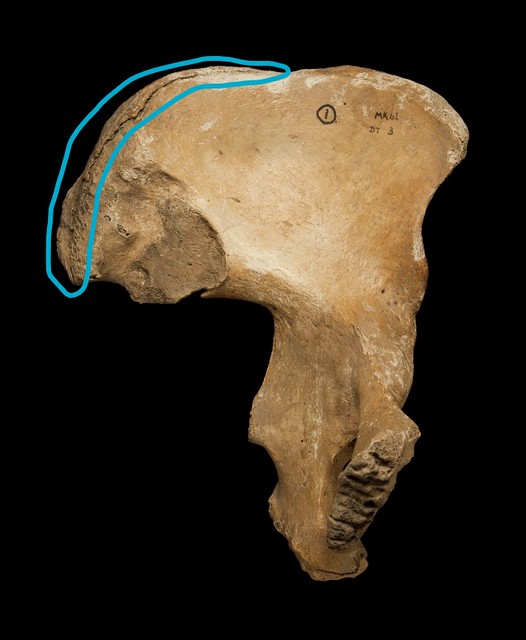 In this pelvis, the iliac crest epiphysis is in the process of fusing on to the pelvis. The area where the fusion line is still visible is highlighted in blue.

Sternal End of the Clavicle

Examining the sternal (more rounded) end of the clavicle can be particularly useful for assessing age-at-death in younger individuals. Not only does the clavicle tend to preserve well, but assessing the stage of this late-fusing epiphysis is relatively straightforward. There are only three stages of fusion:

Stage one, where the sternal end shows no signs of fusion, maintains the billowing youthful surface previously described in earlier articles and videos. During stage two, the epiphysis, often referred to as a ‘flake’, begins fusing to the clavicle but does not yet cover the entire sternal surface. The age of fusion can be quite variable; however, nearly all individuals reach stage three, where the sternal end of the clavicle has completely fused before age 30. This means that once the clavicle has reached stage three, it cannot help us to make more specific age-at-death estimations beyond 30 years old or above. 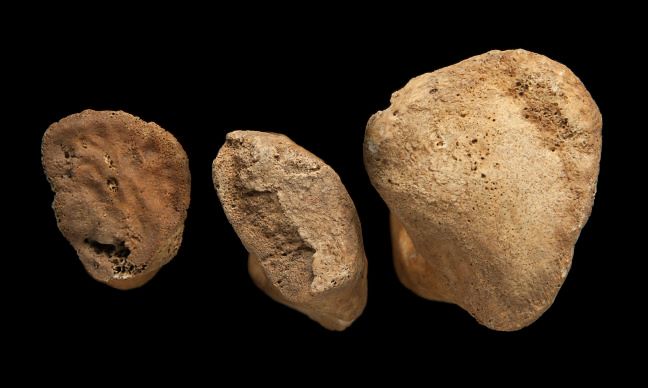 The developmental stages of the sternal end of the clavicle; unfused (left), partially fused (middle) and fused (right).

Sternal End of the Ribs

Examining the ribs at the point where they articulate in the front of the body with sternum can be a useful method for age-at-death estimation. İşcan et al. (1984a, b, 1985) devised an eight-phase system of age estimation from the sternal end of the fourth rib in particular. However, the third and fifth rib can be substituted when the fourth has not been preserved.

Although commonly used in forensic contexts, this method of assessing age-at-death is less practical in archaeological contexts, where the fourth rib is rarely well enough preserved to identify or analyse for age-at-death estimation. Further, this method has been shown to be highly variable, particularly after 30 years of age.

Take a look at the 3D model of a pelvis with late-fusing epiphyses. Understanding the placement of these epiphyses is important not only for accurate age-at-death estimations but also so that they are not mistaken for trauma or pathology.

Now that you’ve learned about several methods to generate age-at-death estimates for adults, move on to the next step to learn about stature, which is another important feature for making identifications from skeletal remains.