Several aspects of diet can be understood from isotopic analyses. Read more about how this complex process works! 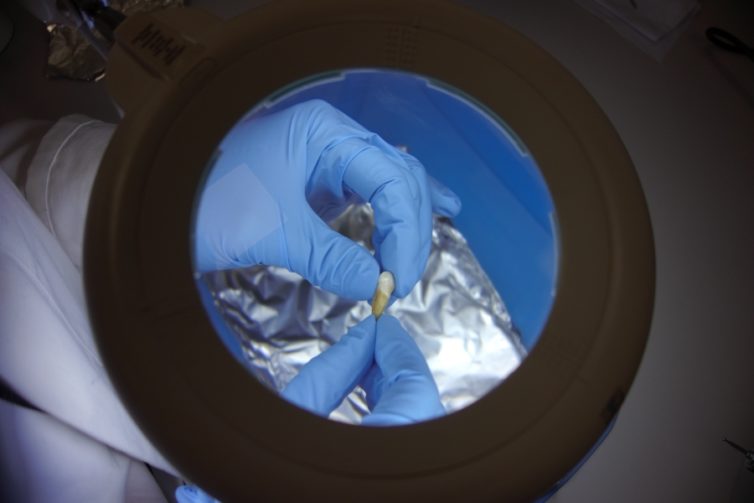 You are what you eat!

Isotopic analysis of carbon (δ13C) and nitrogen (δ15N) is a well-established technique for the reconstruction of human and animal diets in past populations. In teeth and bone, collagen is the predominant protein complex present and provides an excellent source of carbon and nitrogen. The isotopic composition of the carbon and nitrogen in collagen reflects the isotopic composition primarily of the plant and animal protein in foods eaten by a person while the bones and teeth were forming and collagen was being synthesised. Therefore, once metabolic fractionation has been accounted for, the carbon and nitrogen isotope ratios can be measured in the collagen and used to garner insights into, not only the types and quantities of food resources utilised by a population, but also the socioeconomic and cultural influences surrounding the dietary practices of groups as well as individuals.

The variations that arise in carbon isotopes result from differences in ecosystems (marine vs. terrestrial) and the photosynthetic pathways (C3 and C4) used by plants in their manufacture of carbohydrates. As such, variations in carbon isotopes allows differentiation between the relative contribution of C3 or C4 plants and the animal products based on these plants, to diet.

In temperate regions, such as Britain, plants tend to use the C3 pathway. Therefore, isotopic evidence of dietary proteins based on C4 plants (e.g. maize or millet) not native to Britain, would suggest a foreign influence on diet within a British population. A good example of this is the analysis undertaken on victims of the Irish Famine caused by the potato blight. The people of Ireland in the 19th century were strongly reliant on potatoes as their main source of food. When crops were destroyed by the blight, people were starving. Famine relief food in the form of maize was sent over to Ireland from the USA. Potatoes are a C3 crop, whilst maize is a C4 crop. We see a shift in the isotope values of people in Ireland as they start to eat the maize.

Combining the carbon and nitrogen isotopes can facilitate the interpretation of plant, animal and marine protein contributions to past diets. This allows distinctions to be made between broad categories of food groups, such as herbivore vs. carnivore or marine vs. terrestrial input and any potentially non-local influence on diet. 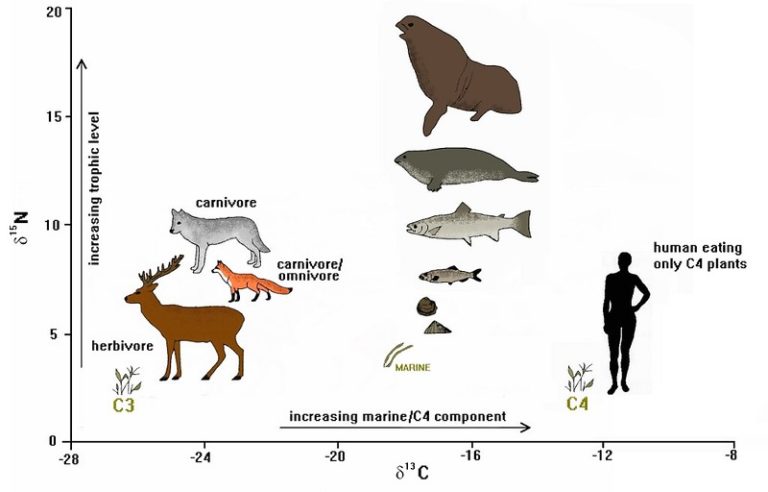 Have you experienced a change in diet throughout your lifetime that might show up in your isotopic signature? For example, did you alter your diet from eating meat to being a vegetarian or vegan? Did you move countries and did your diet change as a result? If so we may pick up differences in your bodily tissues. Your hair and nails will give us a more recent signature, while your teeth will tell us about your childhood. Where do you think you would fit on the food web chart above in terms of your isotope values? Add comments to the section below.

Isotopes can also be used to gain information about migration. See the next step to find out more!